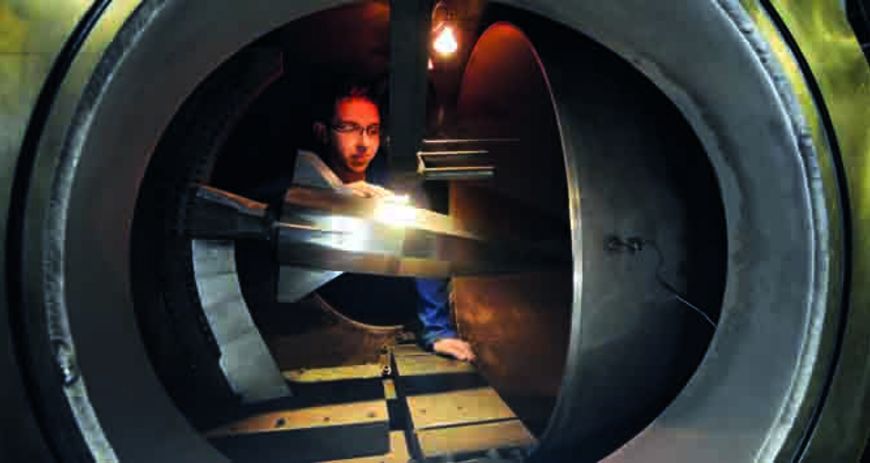 Windy environment Using the model of a spacecraft, researchers in Göttingen simulate re-entry into the Earth's atmosphere. Photo: DLR

No storm or hurricane can achieve this: in Göttingen, an enormous air pump accelerates air to exceed 25,000 kilometres per hour. Scientists use it to simulate the extreme conditions spacecraft and supersonic aeroplanes are subjected to when travelling through the atmosphere

The decisive difference to reality beyond the testing halls: not the flying object moves through the air, but the air moves past the firmly fixed models. Using these about one metre large models, the flight characteristics of a spacecraft or aeroplane can be tested well before construction. Each year, an average of five to eight models are subjected to the strain of this extreme blast of air in the so-called high enthalpy channel. In the 62 metre long wind channel, a piston condenses a gas like in a gigantic air pump. After a steel membrane bursts, a strong shock wave compresses and heats the air before it hits the model with top speed in a wind channel blast pipe. This extreme blast of air in the experiment causes temperatures akin to the Sun's surface, however, only for 0.001 seconds – the duration of such an experiment due to the high speed. It is so short that the materials in the wind channel do not realise that they ought to melt. The duration of the experiments as such is short: in the roughly 25 years of the wind channel's existence, researchers evaluated not much more than a second of measurement time. The wind channel is operated by the German Aerospace Center (DLR), which maintains a total of more than 20 wind channels in Göttingen, Braunschweig and Cologne.