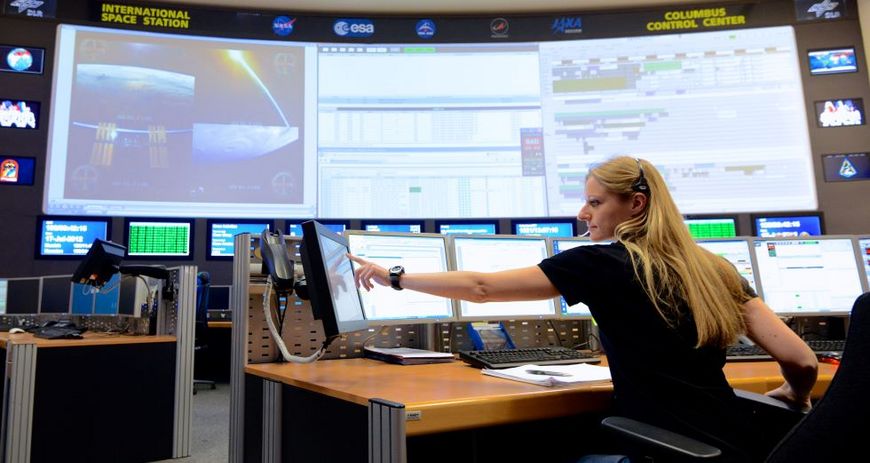 Europe’s space balcony on the ISS

Space research in the era of the coronavirus pandemic

For weeks now, the SARS-CoV-2 coronavirus has been forcing life into standby mode. Aeronautical and space research has also been affected. Meanwhile, despite the crisis, the International Space Station (ISS) has been extended.

Leasing rather than independent construction

“The conditions in space are ideal for many areas of research,” says Julianna Schmitz, who works at DLR Space Administration in Bonn and is the person responsible for commercialization. “Microgravity, in other words weightlessness, allows the fundamental principles of new materials or production processes to be researched far better than on Earth. But research projects into space weather, the Earth’s atmosphere, and biological processes under extreme conditions also benefit from the exclusive location of the platform.” Here, exclusive means at an altitude of over 400 kilometers; on the exterior of the European Columbus module of the ISS; with an unobstructed view of Earth and outer space.

“Before now, the potential for external experiments on the ISS was very limited,” Schmitz says, explaining the idea behind the project. “Bartolomeo should change that and provide access to experiments in outer space for all those who previously could not afford the financial and organizational burdens involved.”

This may apply equally to research establishments from developing countries as well as European universities, emerging startups, and established medium-sized enterprises. Even large concerns, the DLR, and the ESA themselves should also benefit, because in contrast to most previous space projects, Bartolomeo takes a commercial approach. Schmitz explains: “A private enterprise – in this case Airbus Defence and Space – develops, builds, and operates the platform in partnership with the ESA and invests its own financial resources in the project. In exchange, it hires out experimental payloads.” Government agencies thereby save on investing in space infrastructure.

“Room for external experiments was already planned during the development stage of the Columbus module,” explains Schmitz. “This then took shape in practical terms with a call for ideas launched by the ESA in 2015, during which Bartolomeo was selected.” Three years later, the partnership with Airbus was sealed and the contracts were in place. “Airbus provides support for the experimenters throughout,” says Schmitz, describing the process. “It begins with designing and planning the experimental structure, through procuring all the necessary authorizations for a flight into space, right up to transportation to the ISS. Operation of the experiment is also guaranteed.” It should take between one and two years from signing the hire contract to starting the experiment – a lead time that scientists could only dream of previously.

In this era of the current pandemic, the ISS also offers a further advantage: “I would say that, regarding coronavirus, the ISS is probably one of the safest places to be at this point,” says Luis Zea, a researcher at the BioServe Space Technologies institute at the University of Colorado, in an interview with the US news magazine Newsweek.

Research has also been affected by the coronavirus crisis. The European Space Agency (ESA) has reduced the number of personnel at its Darmstadt control center and suspended research missions; the German Aerospace Center (DLR) has been reduced to minimal operation since the middle of March. Many sites are closed and employees are teleworking from home. Yet, “At the same time, the crisis is showing us that infrastructures critical for space travel, such as the German Space Operations Center at the DLR, are fully operational even under difficult circumstances, and we are seeing how creative our colleagues are,” says Pascale Ehrenfreund, Chair of the DLR Executive Board. The creativity she mentions can be seen in numerous places: 3D printers that normally pour out high tech are now producing face masks and ventilator valves. Experts at the DLR Institute for Software Technology supported the German federal government’s “WirVsVirus” (us v. the virus) hackathon and “eyes from space” are revealing how the crisis is changing the world.

Even if other pressing issues such as climate change have faded into the background for the moment because of the crisis, they are far from being resolved. Nevertheless, in terms of greenhouse gas and other polluting emissions, a slight reduction can be expected as a result of the shutdown. The data captured and sent back to Earth by Earth observation satellites such as the European Copernicus program could demonstrate this in the near future. “Satellite-based observation of the Earth makes it possible to record and map changes currently taking place around the world due to the coronavirus crisis. We can thus measure the reduction in emissions and gain valuable data for climate change research,” Pascale Ehrenfreund explains.

It is also important, of course, to continue supporting ongoing missions in the best possible way. Research on the International Space Station (ISS) is continuing as normal. “All measures have been taken on the part of our ISS partners to allow work in the Earth’s orbit to carry on,” said Hansjörg Dittus, Executive Board Member for Space Research and Technology at the German Aerospace Center, in an interview with the Tagesspiegel newspaper. A balcony has just been added to the European Columbus space laboratory, for example. Measuring two by two and a half meters and weighing 484 kilograms, the Bartolomeo research platform provides twelve payload slots with standardized racks. The European Space Agency (ESA) and the DLR want to use this equipment to simplify and commercialize space experiments.