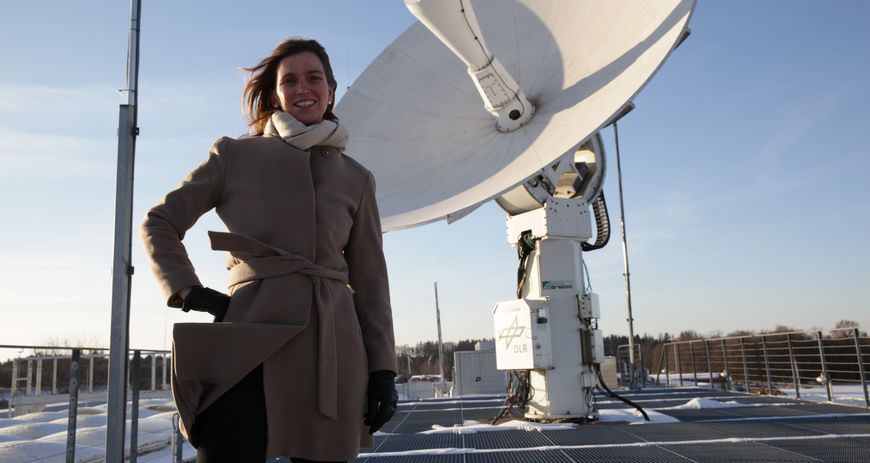 With AI to better climate models

Veronika Eyring combines climate models and observational data to better understand and predict the Earth system and climate change. The physicist, who conducts research at the German Aerospace Center (DLR) and the University of Bremen, has now been awarded the Leibniz Prize for her achievement.

A little wind from the sea blows even here in Oberpfaffenhofen, very close to Munich. Veronika Eyring feels it every time she looks at the watercolor that hangs framed in her home office: It shows the "Schulschiff Deutschland" with its three imposing masts, and it reminds her of her years as a doctoral student in Bremen. "The ship is located on the 'maritime mile' where the Lesum flows into the Weser," says Veronika Eyring. "There, fresh North Sea wind blows with a wonderful maritime flair."

As a physics doctoral student, she began her research by looking at the hole in the ozone layer. She had developed a box model that could be used to calculate the evolution of stratospheric ozone. "The goal was to interpret the measurements from the Falcon research aircraft and better understand what was happening in the ozone layer."

Today, Veronika Eyring is one of the leading experts in climate and earth system modeling. Such highly complex simulations can be used to predict how the climate will change. For the Intergovernmental Panel on Climate Change (IPCC), Eyring is the coordinating lead author of the chapter "Human Impact on the Climate System" in the 6th Climate Assessment Report - and she has just been awarded the Gottfried Wilhelm Leibniz Prize, endowed with 2.5 million euros in research funding, by the German Research Foundation (DFG). The jury recognized her significant contribution to improving "the accuracy of climate predictions through process-oriented modeling and model evaluation."

For her work, Veronika Eyring is both near the mountains and the sea: at the DLR Institute of Atmospheric Physics in Oberpfaffenhofen, Bavaria, she heads the "Earth System Model Evaluation and Analysis" department, and at the same time she is a professor of climate modeling at the University of Bremen - just a few kilometers away from the sailing school ship. "My center of life is in Bavaria," she says; close to home: she grew up in the Bavarian Rhön, and it was there that her enthusiasm for physics took hold: "I had two great teachers who, from the tenth grade on, awakened my love for physics with their demanding lessons." She enrolled at the University of Erlangen-Nuremberg and wrote her diploma thesis on a topic in theoretical solid-state physics in the first half of the 1990s.

Her real career plan crystallized in 1995, when she was looking for a topic for her doctoral thesis: "Even then, international climate researchers were warning about man-made climate change. That got my attention." She worked her way into climate modeling and quickly realized: this is what she wants to work on - "I'm fascinated that we can model the complex system Earth with all its physical and biogeochemical processes, interactions and feedbacks so accurately on the computer. And that we can use these models, which are based on physical laws of nature, to better understand the interrelationships of the Earth system." However, uncertainties remain in the models' predictions. This is where Veronika Eyring's research comes in. "We combine models and observational data using innovative artificial intelligence methods and techniques to better understand and predict the Earth system and climate change."

When Veronika Eyring talks about it, two things come out: First, how much atmospheric and climate research fascinates her. And second, how tremendously the models have improved over the past few years. "Climate models existed back then, of course, but they were much simpler in their representation of processes," she says, explaining, "Early generation global coupled climate models were based on atmospheric models coupled with a dynamic ocean, a simple land surface, and thermodynamic sea ice." Over the years, climate models have been improved thanks to new physics and newly available observations. "Many models have been expanded into Earth system models that include representations of carbon and other biogeochemical cycles important to climate change, in addition to physical climate," she says.

In 1995 - the year Veronika Eyring decided to pursue climate modeling - CMIP, the Coupled Model Intercomparison Project, was established as a project of the World Climate Research Program. This international research alliance aims to better understand past, present and future climate by making climate model simulations comparable and the data accessible. About two decades later, Veronika Eyring became head of this project. She did not pass on this task until the beginning of 2021.

She herself is now focusing on a "Synergy Grant" project funded by the European Research Council, which aims to incorporate artificial intelligence more strongly into climate modeling - the next milestone will be to be able to look even more precisely into the future, and again Veronika Eyring is in a leading position. With an interdisciplinary team, she is developing machine learning techniques to further improve understanding and modeling of the Earth system. "We are developing new parameterizations for clouds and land surface processes to reduce uncertainties in climate predictions," she says. The team is also working to investigate climate variability and extreme events such as droughts for causal relationships using methods such as deep learning. "By bridging the gap between physics and machine learning, we hope to revolutio

Now, in her office, she clicks on an animation on her screen. Veronika Eyring and her team have evaluated various climate models for the end of the 21st century: What happens if the Earth's surface temperature increases by two degrees - and what happens if things continue as they have been, i.e. temperatures rise even higher? "Things don't look good for the Earth there," Eyring says, looking at the globes on her screen: "Reducing greenhouse gases is urgently needed to reduce further temperature increases and the associated negative consequences for ecosystems and humans!" With her work, she also wants to help prevent the "business as usual" scenario.