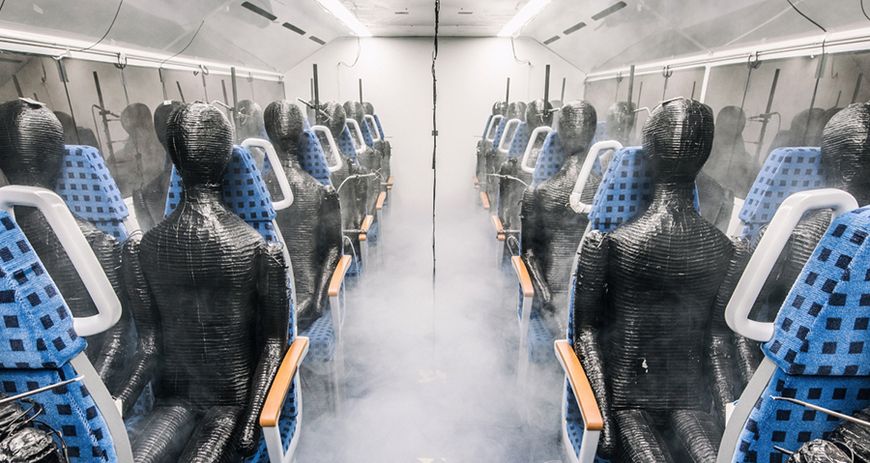 High-speed cameras and gas sensors track the spread of the particles within the cabin. The particles and their concentration are recorded at various points within the space. Image: DLR

Travelling and the corona crisis

How safe is it to travel during the coronavirus pandemic?

By the start of the summer break, it will be possible to travel within Europe again. But how great is the risk of contracting coronavirus on an aircraft or train? Researchers are studying how viruses spread inside passenger cabins.

The aircraft cabin is only carrying a small number of passengers, who are exhaling oil droplets. This is not an indication of ill health, however: The passengers are extremely sophisticated dummies – mannequins resembling human beings that can simulate body functions, even breathing. “We use them to test the airflow on aircraft and in railway carriages,” says Andreas Dillmann, who is Head of the Institute of Aerodynamics and Flow Technology at the German Aerospace Center (DLR) in Göttingen. The mannequins can be heated up and made to disseminate clouds of breath; they are usually used for research into ways of improving passenger comfort on board. Now, in the era of the coronavirus, they are helping scientists to identify possible routes of infection and ways of stopping the virus spreading.

Doctors and economists are not the only ones who are currently preoccupied with the pandemic; researchers from every imaginable discipline are too. Their research is focusing on preventing the virus from spreading – but they are just as often working on measurements and studies that would not be possible at all under “normal circumstances”. For instance, lockdown is helping them to gather comparative figures on air pollution, allowing them to further enhance their models and predictions in this field.

One of the most burning issues since the lockdown started in March has been the question as to when it will be possible to resume travel. In the meantime, it has become clear that many European holiday destinations will open up again over the summer. The main question will then be how passengers can travel to their destinations safely. Andreas Dillmann sensed early on that his institute could play a prominent role in this research: “As soon as the problems of large-scale infection among tourists in Ischgl became known,” says the DLR researcher, “we realized that safety on transportation would become a major issue.”

In their research, Dillmann and his colleagues work with strikingly realistic “mock ups” of passenger compartments on aircraft and trains. These allow the researchers to study precisely how airflows function and where the clouds of breath from a passenger infected with COVID-19 spread to, for example. However, “We are not responsible for evaluating the results, as we are airflow specialists, not virologists,” says Andreas Dillmann.

Even though some studies suggest that aerosol particles may play a role in spreading viruses, virologists have refrained from giving a definitive opinion, as the hard scientific data are not available for such a risk assessment. Aerosol particles are fine droplets that are produced when speaking and breathing, which – in contrast to the larger droplets emitted when coughing or sneezing – do not fall to the ground quickly, but may float in the air for longer, in some instances for minutes or even for hours. “Outdoors, it is highly unlikely that aerosol particles play any significant role in transmitting SARS-CoV-2. In enclosed spaces that are poorly ventilated, however, the situation may be quite different,” explains virologist Melanie Brinkmann, who heads the “Viral Immune Modulation” group at the Helmholtz Center for Infection Research (HZI). “Determining the transmission routes of viruses is often a very difficult undertaking. As yet, the level of transmission of SARS-CoV-2 caused by aerosol particles has not been clearly demonstrated,” says Brinkmann.

Nevertheless, Andreas Dillmann and his colleagues can make clear assertions about how aerosol particles spread in the air. They thus provide an important piece of the puzzle for the risk assessment. The oil droplets exhaled by the mannequins in the aircraft cabin are lit up and made visible by laser beams. A number of high-resolution cameras follow the mist until it is finally drawn in by the air conditioning system.

“It is clear that there are big differences between aircraft and trains,” Andreas Dillmann concludes: Aircraft cabins are often referred to as closed systems – the air is sucked out, passed through ultrafine filters, and then returned to the cabin, enriched with filtered air from outside. The air emitted by the nozzles does not contain any coronavirus. It is important to note at this point that the air flows downwards, so horizontal airflow hardly ever occurs. The likelihood of being infected by fine aerosol droplets moving through the cabin would therefore appear to be minimal. Contact between passengers in close proximity is more problematic. “In fact, the crucial question is whether the virus is filtered out soon enough,” says Dillmann. How many passengers can a patient potentially infect around him before the air is sucked into the filter?

In contrast to this, the air conditioning systems on trains work differently; they use fresh air from outside instead of just recycling the interior air. But the issue remains the same and a key task for Dillmann and his colleagues arises from this: They are working on potential ways of improving the airflow, for example by installing additional fans, so that the risk to passengers is as low as possible – “and to do so without completely turning the cabins or compartments inside out,” says Andreas Dillmann, as there is no more time for major modifications before the holiday season starts.

The preliminary measurement results should be available in a few weeks. Partners from industry will then be able to start applying the results – with the aim of optimally protecting passengers against infection.