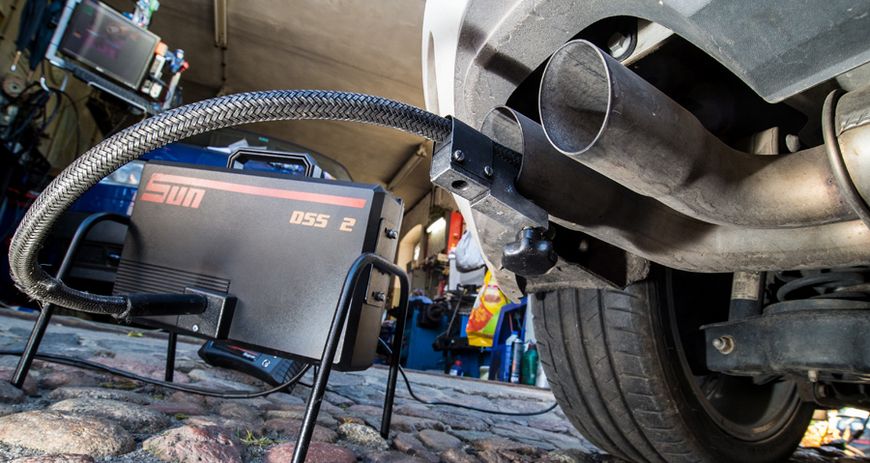 A measuring hose for a device to evaluate diesel engine exhaust emissions, protruding from the exhaust pipe of a car. Photo: Patrick Pleul/dpa

Most people think diesel engines are significant contributors to air pollution. But modern models produce hardly any particulates or nitrogen oxides. We spoke with Thomas Koch about a technology that has fallen into such disrepute.

The General German Automobile Club (ADAC) has just recommended that car buyers avoid models with diesel engines: They should instead wait until models complying with the Euro 6D emissions standards reach the market in the fall. Do you agree with ADAC’s position?

You have to distinguish between the first and second generation of Euro 6. The second generation of Euro 6 complies with the new “real driving emission” standard. This standard’s design makes it the most stringent one there is. Starting in September 2017, this standard—Euro 6Dtemp—will become mandatory for new certifications. At the same time, however, the software of first-generation vehicles is currently being reworked. When this update is completed, those vehicles can be recommended in good conscience.

And what is the fundamental difference between second-generation vehicles and those of the first generation, the Euro 6 vehicles that have been sold since 2014?

The first-generation vehicles were certified according to the old legal framework: The so-called European Driving Cycle, a testing method for determining fuel consumption and exhaust emissions, which had relatively lax boundary conditions. What was new in Euro 6 was the Adblue technology, in which urea is injected into the exhaust gas system to reduce the nitrogen oxides. In principle, this is the decisive technology, but many first-generation vehicles had NOx emissions of 700 to 800 milligrams per kilometer, while the legal New European Driving Cycle (NEDC) certification limit was 80 milligrams.

I can only dispense the urea at temperatures of 180 to 200 degrees Celsius and upward. At lower temperatures, deposits form and corrosion occurs in the exhaust system. But the exhaust temperature of a high-efficiency diesel engine is lower than that. The manufacturers extracted every last part per thousand of fuel efficiency for the first generation, but with each part, the exhaust gas became cooler. This application strategy certainly warrants criticism. They should have been more flexible with fuel consumption. This is because it is only in the window above 180 to 200 degrees that nitrogen oxides can be avoided. These first-generation vehicles are currently being retrofitted to consume a little bit more fuel in exchange for a higher exhaust temperature. Vehicles that previously emitted 600 or 800 milligrams of nitrogen oxides per kilometer are thus reduced to 200 to 250 milligrams.

That’s still quite a bit more than the required 80 milligrams.

The 180 milligrams (Euro 5) and the 80 milligrams (Euro 6) resulted from politicians stipulating something that was not yet technologically feasible. This resulted in grey zones being added, and everyone did business in these grey zones—with some even going a bit outside the grey zones that the legislators had been forced to concede. It wasn’t until the second generation, Euro 6D, that the particle filters and catalytic converters were moved to the very front of the engine, where it is hotter. These new vehicles emit not 80, but typically only 20 to 60 milligrams per kilometer. The diesel discussion thus dredges up problems that have been solved and uses them to completely marginalize the unbelievably positive development in diesel engines. The legislation that will take effect this year stipulates a NOx limit of 168 milligrams per kilometer in real-life driving in its initial phase. At 169 milligrams, the manufacturer faces sanctions. Lots of people couldn’t even conceive of such precise measurement technology three or four years ago, and now it’s here. I think these stringent measurements are a great idea—if for no other reason than the fact that they will quiet this discussion.

But isn’t 168 milligrams instead of 80 a concession to the industry?

Not at all—because the test requirements are different: This new limit must be maintained even when there is a combination of unfavorable boundary conditions. These conditions include a fully loaded vehicle, extreme driving behavior, uphill pulls, and cold. The vehicle is expected to emit significantly less during normal operation, since there is no telling when it will have to compensate for an unfavorable boundary condition. Or several of them. Such a test drive takes about an hour.

In your talk at KIT, you recently posed the question, “Have the engineers failed?” If I have understood you so far, the engineers have achieved all that is technically possible, but cannot perform miracles.

That is correct. And they have made mistakes, especially with Euro 5, when they were too lax with this emissions component because they knew that the low NOx emissions limit was impossible to comply with in real operation. Installing illegal algorithms to detect the test bench measurements, as happened with Volkswagen, is not acceptable. But in essence, all engineers have been fighting for 20 years to reduce emissions, and they have achieved that goal. The technical solution to the problem has been found.

As long as you have a Euro 6D-compliant vehicle. For first-generation Euro 6 vehicles, I can retrofit—but Euro 5 vehicle owners are out of luck and can’t drive in city centers anymore?