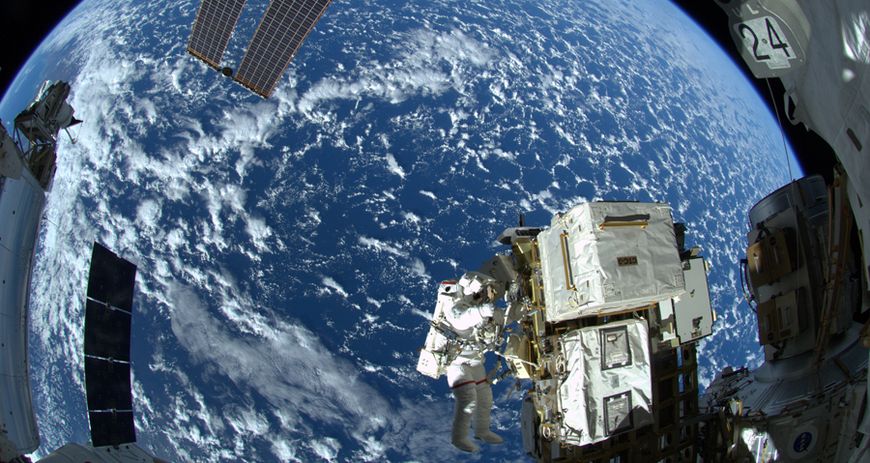 One of the pictures taken by Alexander Gerst during his first stay on the ISS. Source: ESA

From the ISS to Mercury

Alexander Gerst in command of the ISS, a mole landing on Mars, and a launch toward Mercury: These are just three major events in space exploration we have to look forward to in 2018. What follows is an overview of some of this year’s highlights, which are increasingly being shaped by private initiatives.

“Astro-Alex” Returns to the ISS

In April 2018, the Sojus MS-09 space capsule will launch from the Baikonur spaceport and head toward the International Space Station (ISS). Alexander Gerst will be on board alongside Russian cosmonaut Sergey Prokopyev and American astronaut Jeanette Epps. It will be Gerst’s second trip to the ISS, but unlike his first journey, this time he’ll be taking the command.

This is quite an honor for the 41-year-old who already spent 165 days on the ISS as a flight engineer in 2014. Of course, the primary focus remains the scientific results the mission is expected to deliver. “The some 40 scientific and commercial experiments planned during Alexander Gerst’s stay on the ISS are intended to help us solve problems here on Earth, particularly in the fields of medicine, materials science, and robotics,” says Pascale Ehrenfreund, Chair of the German Aerospace Center (DLR) Executive Board.

Going into the Horizons Mission, the DLR hopes to draw on Gerst’s popularity and the sizeable media attention garnered by the previous Blue Dot Mission. “Of course, the mission will also contribute to bringing science in general and especially aerospace science into the public eye in Germany and get the next generation excited about technological and scientific exploration,” said Ehrenfreund.

In addition to the seasoned Sojus from the Russian space agency Roskosmos, American space capsules will also journey to the ISS for the first time since 2011. NASA has awarded two companies contracts to do so: SpaceX and Boeing. Both companies are hoping to carry out successful test flights of their Dragon 2 and CST-100 space capsules, respectively, in 2018. These will be the first manned American space launches since the retirement of the Space Shuttle in 2011.

Nearly 50 years after the first moon landing, Earth’s lunar satellite is back in the limelight. In 2013, the Chinese space agency CNSA successfully landed their Chang’e 3 robot on the Moon, making it the first soft lunar landing since the 1970s. Sister probe Chang’e-4 was initially built as a backup, but is now being sent on a prestigious mission of its own: the first ever landing on the far side of the Moon, where a communication satellite is to be placed specifically for this purpose. The Chinese are particularly interested in researching the South Pole–Aitken basin, the largest known impact crater in the Solar System.

2018 will also see the outcome of the Google Lunar X Prize competition, which is set to award over 20 million dollars to the first private group to land a functioning robot on the Moon. The deadline has had to be repeatedly extended since none of the 30 participating teams were sufficiently close to reaching their goal.

SpaceX also announced they would be sending a space capsule with two astronauts on a trip around the Moon in 2018. Should they succeed, this will be the first mission of its kind since 1971, but the company has yet to complete a test flight of the designated space capsule. DLR Chair Pascale Ehrenfreund comments, “SpaceX is one of the drivers of commercial space exploration. The company has demonstrated that they have been pursuing their goals with great determination ever since the launch of the first SpaceX launch vehicle in 2010. Their success thus far has made SpaceX a marketable provider of launching services in a short period of time. In this respect, it will be very interesting to see how SpaceX manage to put their future plans into practice.” 2018 may well go down in aerospace history as the year private initiatives really got off the ground.

Landing a “Mole” on Mars

The NASA probe InSight is scheduled to set out to Mars in May 2018. It will carry a lander on board that will be able to take measurements beneath Mars’ surface for the first time. These measurements will help deepen our understanding of basic geologic processes on the Red Planet. While these types of missions are often celebrated as prestigious national projects, they are actually global collaborations. Both of the InSight’s primary tools have roots in Europe: a seismometer that has been developed under the direction of the French space agency CNES and a thermal probe from the DLR. Tilman Spohn, research director for the thermal probe, provides a simplified description of the scientific aims of the project, “We want to explore Mars as a thermal engine; an engine that is heated up and then radiates heat out to its surrounding environment.” Spohn explains that since Mars’ formation, a massive amount of heat has been stored in its interior. The decay of radioactive elements also contributes to the planet heating up, yet it is constantly cooled as it loses heat out into space.

The probe is designed to study this flow of heat. “We are working – for the first time on another planet – with a type of self-penetrating probe that can hammer itself into the surface. It is about 30 cm long and 3 cm in diameter. It pulls a tether containing temperature sensors behind it as it penetrates the surface, allowing the probe to measure the temperature and thermal conduction between 3 and 5 meters beneath the planet’s surface,” explains Spohn. Daily and seasonal changes no longer have an impact on temperatures at these depths.

Growing fresh food in the antarctic