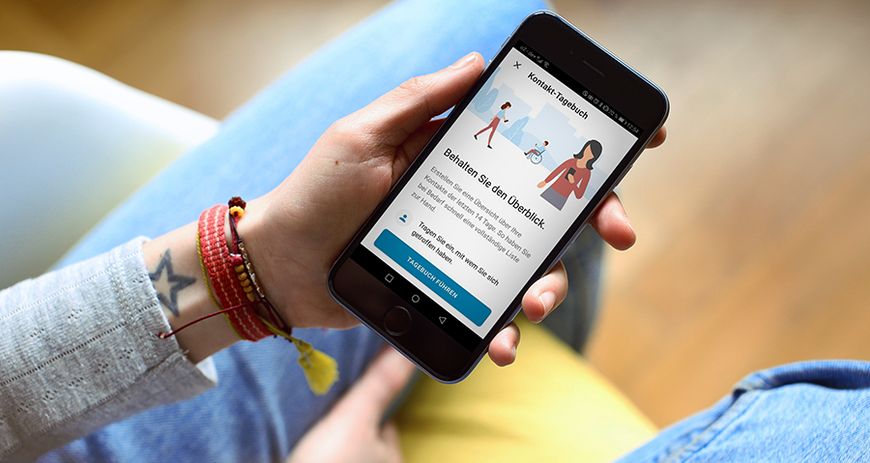 The Corona warning app has been equipped with new functions. Now, among other things, users have the possibility to keep a contact diary in the app. (Image: Helmholtz)

What does the Corona warning app do?

The Corona warning app has now been available for more than half a year. How is it helping to contain the pandemic, and what new features are planned?

Germany is deep in the second wave of the pandemic. The Corona warning app is designed to help contain the spread of the virus and break chains of infection more quickly. The application is designed to warn people at an early stage if they have had contact with an infected person, giving them the opportunity to isolate themselves in time. The app has now been available for more than half a year. How is it being used, what innovations are planned, and what role does it play in pandemic response?

More than 25 million people have installed the app on their smartphones so far, even if not all of them actively use it. So far, more than 220,000 people who have tested positive have shared a test result via the app to warn other users. According to figures from the Robert Koch Institute, the percentage of people who have shared their test result in relation to the number of total infections currently varies between 10 and 15 percent. The app can also be used as a tool to communicate test results to individuals. In total, it has been used for this purpose in almost 8 million cases.

It is not entirely easy to evaluate the app's success based on these numbers. If the notification of infection is not too late, it helps to inform the contacts of an infected person at the critical stage when infection is possible. These individuals can then get tested or reduce their own contacts. The question of the extent to which the Corona Warning app actually prevents infections is harder to answer. One thing is certain: the more people use the app, the greater the contribution it can make to containment.

The app's implementation respects the privacy of its users so effectively that it is not initially possible to evaluate its success on the basis of the app data alone. However, this has the advantage that more people will use the app, says Cas Cremers of the CISPA Helmholtz Center for Information Security: "The effectiveness of such an app depends first of all on how large a part of the population uses it. So the highest priority in making such an app particularly effective should be to increase the number of people who trust the app." CISPA was asked by the federal government to provide scientific support to SAP and Telekom in developing the app in terms of data protection and IT security. Cas Cremers was intensively involved in the conceptual development of the underlying digital contact tracking.

A crucial link in the chain between a positive test and the prevention of further new infections is the app user himself. Even if a user decides to share their positive test result with others via the app, this does not mean that the recipients of the resulting alerts will voluntarily quarantine themselves. It is true that there are studies from Switzerland that suggest that contact tracing via app works similarly well as classic contact tracing by health authorities. However, unlike the app, these can issue a binding order to quarantine those affected. There is also no data on how many of the users who self-isolate when alerted by the Corona warning app actually become infectious. To make matters worse, it remains very difficult to determine how SARS-CoV-2 spreads in everyday situations. It is also difficult to reliably determine how high the number of unreported infections really is.

After its release in the summer, the Corona alert app has been regularly improved and equipped with new functions. For example, contacts can now be tracked across borders. Currently, data exchange works with apps from Belgium, Croatia, Cyprus, Denmark, Finland, Ireland, Italy, Latvia, the Netherlands, Poland and Spain. Integration with the app infrastructure in the Czech Republic, Austria and Switzerland is planned.

Getting the app to work across borders with similar services in other countries has taken longer than many experts had hoped. Other key EU countries are still missing from the list. CISPA expert Cas Cremers explains it as follows: "The delays come mainly from fundamental European processes when it comes to negotiating such contracts and agreeing on the technical requirements." He compares it to railroad tracks. "The core data of these apps are compatible, but there are many other aspects that need to be taken into account around that. Although all tracks in Europe have the same gauge, after all, we don't just run German trains everywhere across Europe."

With an update in December, users of the Corona Warning app were now also given the option of keeping a contact diary in the app. This is, of course, completely voluntary and is intended to help health departments track contacts. Some experts had recommended keeping such a diary in advance. Those who create their contact diary in the app have the advantage of being able to reuse people and places that are visited often. In addition, the app only stores the entries locally and automatically deletes them after 16 days, which makes it easy to store them in compliance with data protection laws.

Further updates and new functions are planned for the coming months. An encounter history is to ensure that information can be stored on the time of the encounter for low-risk encounters. Discussions on this are still ongoing. A survey will be integrated in one of the next updates, targeting users who have received a red status indicator. Among other things, research is to be conducted into the proportion of those who have received a red status display and subsequently tested positive themselves. This will enable the Robert Koch Institute and public health departments to better assess the effectiveness of the app and the prevalence of SARS-CoV-2 among the public. In addition, the Corona Warning app is expected to be available for smartphones with older operating systems in the coming weeks.

The developers also likely want to make the app more interactive with these changes. CISPA researcher Cas Cremers basically sees two different types of users: "Personally, I want the app to leave me alone until a warning is appropriate. That works well right now, and I know a lot of people who use the app the same way. But there are also people who want the app to show that something is happening because otherwise they will uninstall it. Those users would feel more comfortable with more interaction."

Even beyond this, those involved in the project are constantly examining how the app can be further developed in accordance with the basic principles of voluntariness and data protection. The possibility of being able to register anonymously for events and meetings is also being considered. In what form has not yet been determined. The Swiss warning app has already implemented a corresponding concept from the open source community. After the end of the lockdown, such a function could help to normalize social life to a certain extent again and still further limit the spread of the virus.

Facts and figures from the RKI on the Corona warning app