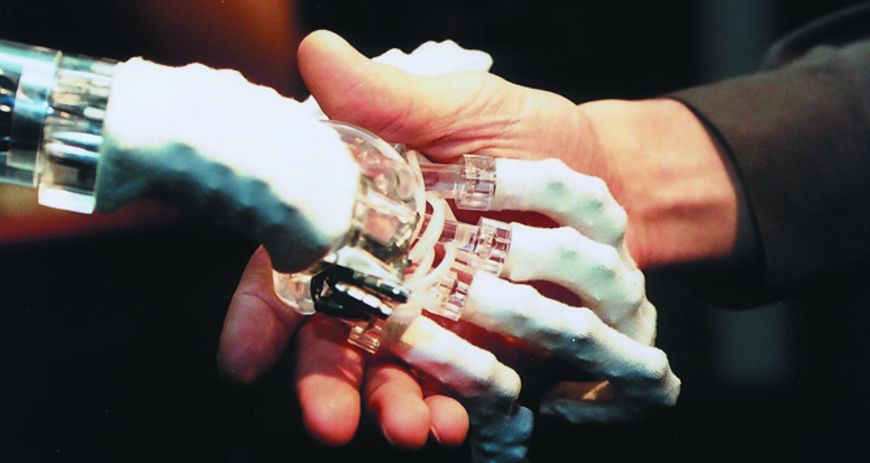 They are amongst us

From science fiction films, we know cyborgs to be creatures with superhuman capabilities and dangerous powers. Far from it! In truth, we peacefully co-exist with them

Since almost 17 years ago, Cathy Hutchinson from near Boston in the US federal state of Massachusetts has been unable to move her body. The 60-year old woman cannot even lift her arm since a stroke left her paraplegic. The fact that, about two years ago, she managed to serve herself a coffee for the first time again in spite of her condition is owed to the power of her thought and the inventiveness of a German-US American team of researchers. Only through the force of her imagination has she managed to control a robotic arm to the effect that it first grasped a drinking bottle and then moved it to her mouth.

A story that received plenty of media coverage at the time, yet which can be given also a different slant: Cathy Hutchinson is a human cyborg – at least, if one is to strictly stick to the scientific definition: The term is an acronym, derived from the English words cybernetic organism and thus denoting a combination of a living organism and a machine. Just like in the case of Cathy Hutchinson: the neuronal signals of her brain, which she creates by way of thought, were captured by a little sensor that had been previously implanted into her head by the researchers. Using a special software, a computer then translated the signals into control commands for the robotic arm.

Christof Niemeyer from the Karlsruhe Institute of Technology (KIT) emphasises that, contrary to the cyborgs in science fiction films, there is no need to be afraid of the real-life cyborgs. He recently summarised the state of research in a review article titled "Chemie der Cyborgs" (Cyborg Chemistry), published in the professional journal Angewandte Chemie. Quite the contrary: the combination of the human body with modern electronics can even save lives. Take the example of a cardiac pacemaker: when taking a closer look at its mode of operation, it becomes clear that not the human controls the electronics – such as the paraplegic patient her prosthesis – but that the electronics control the human being. The cardiac muscle within the human is stimulated by electronic impulses and stimulated into contraction. "Systems that inject signals into nerves, muscles or directly into the brain have been in daily use for a long time now", says Niemeyer. In addition to the pacemaker, examples include systems for deep brain stimulation: here, an implanted device emits electronic impulses – sending them to the patient's brain. This allows for the manipulation of neuronal circuits, which cause movement disorders such as can manifest themselves in the event of Parkinson's disease and epilepsy. Disease-specific symptoms such as shaking and stiffness are thus alleviated. As to what exactly happens in the brains of these patients during such stimulation, however, still remains scientifically unverified.

What is certain, though, is that here a technology is at work that controls the human body or at least some of its functions. Perhaps the computer-controlled creatures we know from cinema are not quite such an outlandish vision after all? Niemeyer rejects this notion: "The signals used here are far too weak and random to be able to control an entire organism", he says. He continues to say that science and technology are not even capable of doing so, since the brains of most living creatures are far too complex.

Even so: precisely because of such misleading negative associations, some other scientists are largely disinclined to use the term cyborg for humans at all, for instance, medical ethics specialist Jens Clausen from the University of Tübingen. He says that "even though these days some people may be  classified as cyborgs in a technical sense, the term ultimately implies a threat." After all, somebody with a cardiac pacemaker is not a hybrid of living being and electronics like the cyborgs from the realms of science fiction. "He or she remains a human being – with all his or her human rights".

To enable a paraplegic patient to control a prosthesis or for a cardiac pacemaker to function, knowledge from many different disciplines is required. "Here, chemistry plays an important role as it provides new solutions for improving the linkage between technical implant and natural tissue", explains Christof Niemeyer. The chemist heads the Institute for Biological Interfaces at the KIT, where he and his team develop special surface coatings. These coatings are intended to connect to cells in a targeted manner whilst at the same time rejecting pathogenic agents and dynamically adapting to the surrounding tissue. Moreover, the researchers work on shrinking the artificial systems to match the minimal dimensions of human cells. "If an improvement of the interfaces and the fine tuning of the dimensions of the electronic systems can be achieved, then this should result in improving the quality of signals, rendering movement controllable in a more targeted manner", says Niemeyer.

Tübingen-based medical ethics expert Clausen likewise thinks that cyborg research holds large potential: "I see no threat in this technology. I hope that we will be able to further tap the therapeutic potential in order to help severely ill people." Clausen is convinced that remote controlling of a human being's will is neither going to be technologically possible one day nor be permitted.

The same does not apply to lower organisms such as insects: scientists have already managed to develop animal cyborgs, which carry out a given movement programme such as flying or crawling when triggered by remote control signals. For example, such insect cyborgs could in future be used as miniature flying objects for monitoring missions or for search and rescue missions in life-threatening environments. This in turn sounds like science fiction. But this time it is of the positive kind.

In the professional journal Angewandte Chemie, Christof Niemeyer, Stefan Gieselbrecht and Bastian Rapp from the KIT discuss the current state of research regarding "Cyborg Chemistry" and take a look at the opportunities and risks. (DOI: 10.1002/ange.201307495) The journal Angewandte Chemie is considered the worldwide most important magazine for chemical research and has been in publication for 125 years. The article by the KIT scientists on cyborgs was published as a cover story in the final issue of the anniversary volume.

Prof. Dr Patrick van der Smagt from the German Aerospace Center (DLR) and Prof. Dr John P Donoghue from Brown University, USA were awarded the Erwin Schrödinger Prize 2012 for their development of an innovative arm prosthesis, which paraplegics can move with the force of their thought. In the following video, they explain how the artificial arm works.