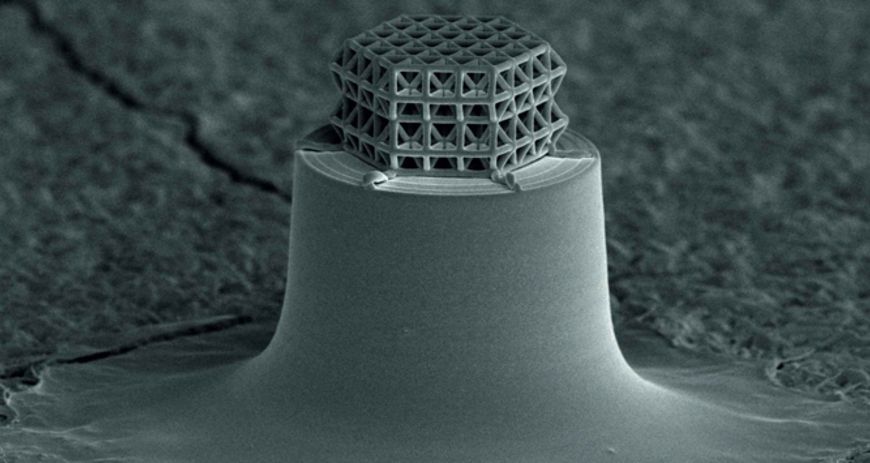 The smallest lattice in the world is visible under the microscope only. Struts and braces are 0.2 µm in diameter. Total size of the lattice is about 10 µm. (Photo: J. Bauer / KIT)

The construction style of medieval buildings shows that timber framing ensures long-term stability. KIT research scientists have now created the smallest timber-framed construction in the world – a nano-structure with interesting prospects for the future.

The complex framework is recognisable under the microscope. It measures only ten micrometres and is made up of hundreds of struts. Their diameter comes to 200 nanometres; 200 times finer than a human hair. The dwarf was produced in two steps – first, a special 3D printer formed the latticed structure by hardening liquid plastic at certain points by means of a laser”.

However, the resulting timber-framing construction was clearly still too big – it needed some form of shrinkage process. “We heated the structure in a vacuum up to 900 degrees,” explained Jens Bauer, Engineer at the Karlsruhe Institute of Technology (KIT). “By means of this pyrolysis, hydrogen and oxygen were evaporated out of the material, the timber-framing construction shrank down to a fifth of its original size.” What was left over was a frame of pure carbon with a glassy consistency, much more stable than the original plastic. “By applying the pyrolysis trick, we were able to kill two birds with one stone,” says Bauer. “We made the construction smaller and, at the same time, more stable.”

The result: The new structure is almost as solid as steel and ceramic, but considerably lighter. While a cubic centimetre of steel weighs eight grams, the weight of the nano construction is only one-half gram. This could make the material attractive for lightweight design over the long-term, for example in airplane construction. “But for that purpose we would have to be able to manufacture considerably larger components than we can today,” says Bauer. “That could be achieved in the future by having our timber-framing constructions printed with several lasers at the same time.”

But the nano timber-framing displays other characteristics as well: it is electrically conductive, stable under high temperatures, optically active and bio-compatible. It could thus serve, sometime in the future, as a micro-filter, an optical invisibility hat or an effective cooling aggregate for PC processors.

To the press release of the Karlsruhe Institute of Technologie