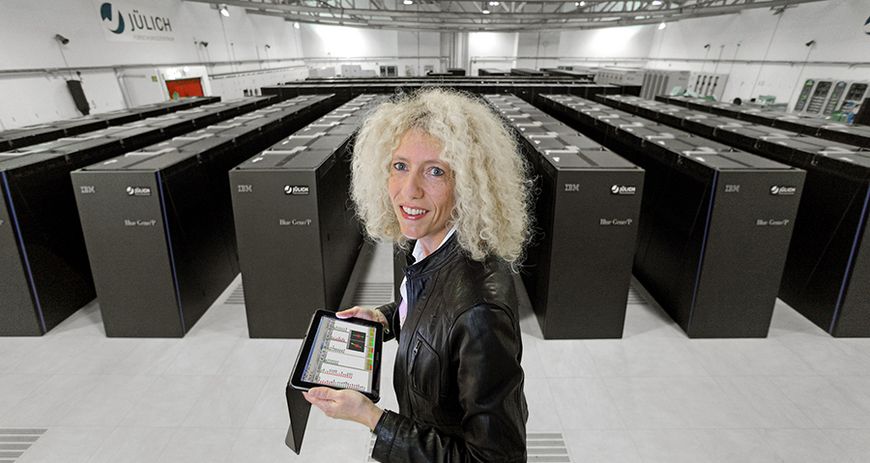 Kristel Michielsen fought for access to computer science while still at school. She has continued this path consistently. At Forschungszentrum Jülich, she simulates the functioning of quantum computers - with success: In the past ten years, she has set several world records.

The first time she won a fight for IT, Kristel Michielsen was 16 years old. It was about the choice of high school courses at her high school in the Belgian province not far from Antwerp, and in fact she was supposed to take four hours of Latin a week if she chose mathematics as her major. "But that didn't tempt me at all," she says in retrospect. And she decided to fight: together with five like-minded people, she finally succeeded in getting the principal to reduce the Latin lessons and instead get an introduction to computer science.

That was in the early 1980s, when computer science was still an exotic subject, and the daughter of a biology and geography teacher and an engineer was interested in the discipline primarily out of intellectual curiosity. This curiosity eventually drove her into an area of science that could revolutionize the information sciences. Today, at the age of 53, she is one of the pioneers in the field of quantum computers with her department Quantum Information Processing at Forschungszentrum Jülich.

In the photos, Kristel Michielsen smiles into the cameras with her striking curly mane of hair; in the background, the high-tech components of the Jülich supercomputer are piled up. "That's where you can take the most exciting pictures in the computer room," says Michielsen shrugging his shoulders. And even if she is not at the supercomputer every day, it plays a decisive role in her work: With her team, she and her colleagues use conventional supercomputers to simulate the functioning of relatively large quantum computers. These are still being developed, but one of her problems is already becoming apparent: The so-called qubits - an abbreviation for quantum bits - are unstable. In arithmetic operations, this easily leads to errors that have to be compensated for. Kristel Michielsen's simulations can be used to anticipate how quantum computers will function and also their susceptibility to failure.

At the same time, this work shows how much progress has been made in the field of quantum computers - Kristel Michielsen's world records can serve as an indicator: In 2010, together with colleagues, she was the first to simulate a quantum computer with 42 qubits on the Jülich supercomputer JUGENE, and the value gradually increased to 46 qubits in December 2017. Most recently, Kristel Michielsen made headlines when she was involved in a Google project that proved for the first time the so-called quantum superiority in practice - i.e. that a quantum computer can solve a certain problem much faster than a conventional computer: the Google quantum processor managed a complicated calculation in 200 seconds. The fastest supercomputer in the world would take 10,000 years to accomplish this task, according to Google. Competitors may doubt these values, but Kristel Michielsen puts them into perspective anyway: "It is difficult to compare a device that is still in the development stage, such as a quantum computer, with a high-performance computer. It's like comparing a child's bicycle with a Ferrari.

Application orientation is something that Kristel Michielsen finds particularly important in her work. After her studies in Antwerp and more than ten years of research in Groningen, she founded a company in 2006 that developed highly specialized software for computer chip manufacturers. "I always had good contacts with Jülich," she recalls, "and when my current position there became vacant in 2009, I already knew what I was getting into. She accepted the call, again driven by the intellectual curiosity that has accompanied her since her school days.

In the next step, quantum computers will calculate a task from practical experience

And she has also long since solved the housing issue that was at the beginning of her time at Jülich: She was not attracted to larger cities like Cologne or Aachen, and she also wanted to stay close to home. "We then discovered a house in Voreifel that we liked straight away," she says. She immediately fell in love with the garden, which she spruces up in her free time - "from the quantum computer to the lawnmower," she says herself, smiling. And she can ride a bike there too, a passion she took with her from her Belgian home. It would only be too far by bike to get to work: Even in a car, it takes 40 minutes to get to Jülich.

In order to be able to give an answer to the question she hears most often - when the first quantum computer will finally be available - Kristel Michielsen and Thomas Lippert have developed the so-called QTRL scale, which measures the Quantum Technology Readiness Level. It ranges from one to nine; the numbers stand for the theoretical framework for quantum computing at the lower end of the scale and for the first usable quantum computer at the upper end. "We're currently at level five, I'd say," she then explains - the next big step would be to let the quantum computer calculate a task from practical experience and not just a purely theoretical, highly complex formula like the one used recently in the Google breakthrough.

"I would compare current quantum computers like those from Google and IBM with a hot-air balloon that is just rising: It's going somewhere - we just don't know the exact direction yet," says Kristel Michielsen. The fact that the balloon flies at all is the real breakthrough. "Now we still have to learn how to steer it. She is convinced that this will succeed - and until then, Kristel Michielsen is enjoying the view from up there from the basket of the balloon, she can tell.