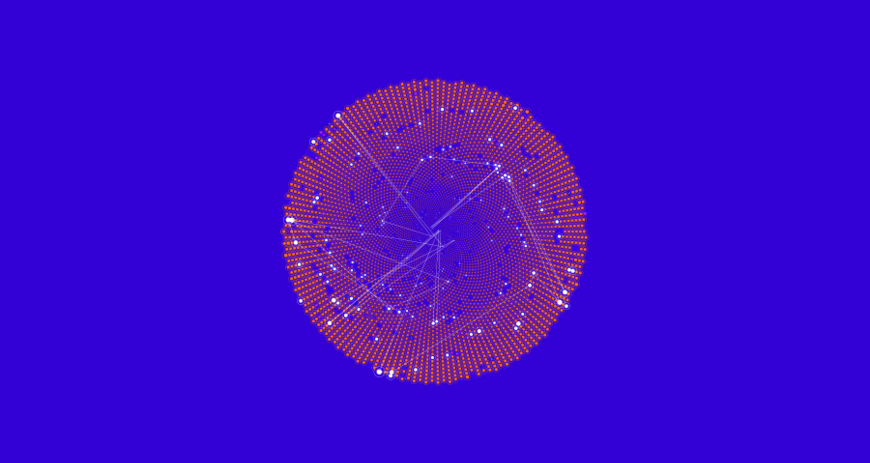 PhD students at the DASHH graduate school use complex data science methods for their research, for example to make computer simulations even more precise (Image: Michael Schmitz for Helmholtz/HIDA).

Evaluating huge amounts of data requires intelligent algorithms - and interdisciplinary experts. The DASHH graduate school in Hamburg trains the next generation. Helmholtz is thus laying the foundation for using data science to find answers to the big questions of our time, such as climate change.

The material has tiny pores, a kind of Swiss cheese on a nanometer scale. Structures like this exert a fascination on Lars Dammann. That is why the young physicist, who is doing his doctorate at the "Data Science in Hamburg - Helmholtz Graduate School for the Structure of Matter" (DASHH), has made them the subject of his thesis. This is because the nano-sponges have amazing properties: for example, water can flow through them much faster than through membranes with larger pores, which should allow a much greater throughput than with current filter systems. "This promises new possibilities for clean energy production and storage and would help mitigate the climate crisis," says the doctoral student. "In addition, nanoporous materials could serve as filters for wastewater treatment and seawater desalination, alleviating the increasingly pressing problem of water scarcity."

To advance research into nanoporous substances, the doctoral student has to handle considerable amounts of data. On the one hand, Dammann evaluates the data from high-resolution X-ray experiments, as they take place at the X-ray radiation source PETRA III at the German Electron Synchrotron DESY in Hamburg. On the other hand, he tries to reproduce the microscopic events with elaborate computer simulations. He uses artificial intelligence methods for his research. "In my doctoral thesis, I want to combine both to make both the data analyses and the computer simulations more powerful," the physicist tells us. "But this requires new computer methods, such as self-learning algorithms."

Managing the ever-growing flood of data

Data science has become extremely important in research. The smallest sensors, but also large scientific devices such as the LHC particle accelerator in Geneva or the European X-ray laser XFEL in Hamburg, are supplying ever more and ever more detailed measurement data. The result is a constantly growing flood of data that must be processed and analyzed. "With conventional methods, it is becoming increasingly difficult to evaluate these huge amounts of data," explains Rolf Greve, head of the Office of Science and Research at the Hamburg Science Authority. "This requires new, innovative methods of data science, for example artificial intelligence and machine learning." Among other things, such programs are capable of evaluating data while an experiment is still in progress or searching for hidden patterns in a data set.

Interdisciplinary training and networking
The challenge: The development of this software requires experts who are familiar with both physical measurement methods and the latest tools in computer science and applied mathematics. DASHH trains precisely such experts. The interdisciplinary program spans the fields of structural biology, materials science, particle physics and research with X-ray radiation sources. "These different fields use some of the same methods," explains DASHH spokesperson Nina Rohringer, senior scientist at DESY. "So software methods that have proven themselves in particle research can also be helpful for structural biology or astrophysics."

Another special feature of the six Data Science Schools is the network they span between different research institutions. DASHH, for example, is a joint project of nine partners, including the Helmholtz Center DESY, the University of Hamburg, the Technical University of Hamburg and the Helmholtz Centre for Infection Research (HZI). All DASHH PhD students are supervised by two experts each - one person from the field of computer science or mathematics, one from the natural science application field. In addition, DASHH and HIDA offer them numerous events, courses and exchange programs.

"Programs like DASHH build bridges between different subjects and institutions, and that ensures better knowledge transfer and more scientific progress," emphasizes Rolf Greve. "In terms of training young scientists, DASHH forms an important platform that supports interdisciplinary research centers in particular." The jury of the North German Science Award also recognized this and honored the DASHH program with the award in November 2020. The award recognizes transnational collaborations in science that stand out for their scientific excellence and, through their success, contribute to the strengthening and competitiveness of northern German scientific networks.

Using AI to find answers to big societal questions
"This award promotes interdisciplinary collaborations and makes them visible to the public," emphasizes Rolf Greve. "And DASHH is a particularly good example of collaboration between different institutions and disciplines." His hope: One day, the program's graduates will help find answers to some of society's most pressing questions: How do viruses work, how do they infect the human body? And how can materials be found for lighter cars and more efficient batteries? "In the future, such challenges can only be mastered with powerful digital tools and close collaboration between different disciplines," says Greve. "And DASHH is training those data science professionals who will successfully tackle these problems in science and industry."

And what will happen with the prize money from the North German Science Award, 125,000 euros after all? "We want to use it to set up workstations for the DASHH students at the CDCS, the new Center for Data and Computing in Natural Sciences. They specifically requested this," says Nina Rohringer. Thus, in the future, Lars Dammann will have the opportunity to conduct joint research on site at the DESY campus with other DASHH PhD students using state-of-the-art technologies, thereby coming closer to the vision behind his project: "The dream would be to couple computer simulation and experiment so closely that I can already visualize the measurement data via simulation during the experiment." And that could help to better understand those nanopores with the enigmatic properties that could one day serve as the basis for more efficient water filters and innovative ways of generating energy. In this way, Data Science is creating the conditions for actively tackling problems such as water scarcity and climate change.

In an interview, Rolf Greve, Head of the Office for Science and Research at the Hamburg Science Authority, emphasizes the potential of Data Science and the importance of DASHH for Hamburg as a business location.