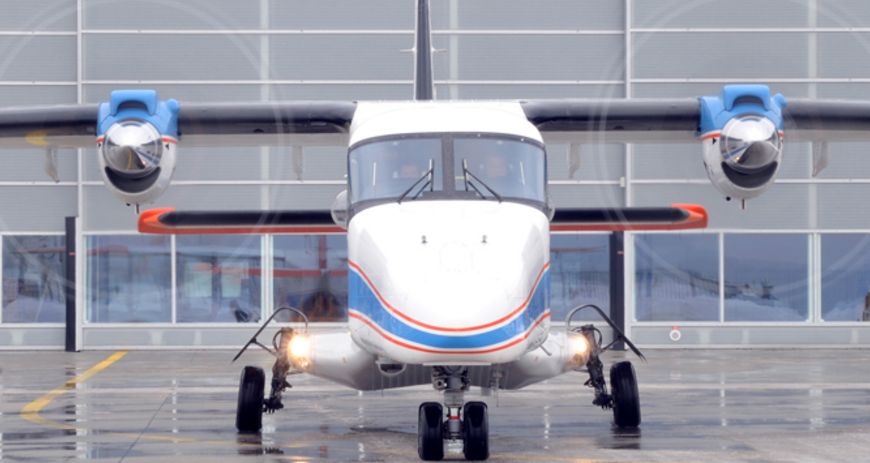 The DLR research aircraft Do228-212 in front of the hangar at the DLR flight facility in Oberpfaffenhofen. Photo: DLR (CC-BY 3.0)

A team of scientists and engineers was successful in their attempts to exchange a quantum key between a research aircraft and a ground station – this is a significant step towards development of tap-proof data communication. The research scientists shall receive for their joint project this year’s Stifterverbands scientific award – the Erwin Schrödinger Prize. German Aerospace Center (DLR) engineer Florian Moll describes the principle to us.

With the scientific award from the Stifterverband – the Erwin Schrödinger Prize – the Helmholtz Association and the Stifterverband honour a research team every year that combines various subject areas, thus creating special innovations. The prize for 2015 goes to physicists from the Ludwig-Maximilian University (LMU) in Munich and engineers from the German Aerospace Center (DLR) in Oberpfaffenhofen. They were successful in exchanging a quantum key between a research aircraft and a ground station – a significant step towards development of tap-proof data communication. German Aerospace Center (DLR) engineer Florian Moll describes the principle to us.

In this project, the research team focussed on a new method called quantum cryptography. What does that mean?

To put it briefly: tap-proof exchange of information. The danger that transmission of an encryption key could be tapped without being noticed when using conventional methods is omnipresent. But the situation is different when quantum cryptography is used. With this method, one can find out on the basis of physical laws whether or not an eavesdropper is listening in during key distribution. Should an eavesdropping offence actually be confirmed, the transmission can be interrupted and the most significant data are not transferred at all – and the data thief is left empty-handed.

How does this method work in detail?

The key is created through an exchange of individual photons, individual light quanta, which we polarise in different ways each time – meaning, we change their direction of vibration. A cunning selection of polarisation conditions guarantees that an eavesdropper who intercepts these photons shall invariably insert errors when he forwards the photons after listening in. He disrupts the quantum characteristics of the photons, and the recipient inevitably becomes aware of this. Then the system knows that it has an eavesdropper on the line and can react accordingly.

Is quantum cryptography currently being used? After all, we are living in a time in which demand for tap-free data communication is higher than it ever was before.

Such devices are currently available for purchase, and some banks are probably already using them for their internal communications. The photons are sent through fibre-optic cables when these devices are used. But this has a disadvantage – the range of operation thus far is limited to a few hundred kilometres. Use of this method for communication from Europe to the US, for example, is not possible. This is why we are using a different approach: We want to send the signals via satellite, and then the light quanta can spread out almost completely undisturbed in the atmosphere and space. This would enable secure key exchange around the globe. Together with the researchers at the Ludwig-Maximilians-Universität (LMU) in Munich, we have recently been able to substantiate the feasibility of quantum cryptography between a research aircraft and a ground station – an important preliminary step towards satellite communication.

How did this collaboration with the LMU physicists arise – what happened?

LMU researchers have very good command over quantum cryptography. Here at DLR, we are specialised in sending data between mobile transmitters and receivers – this includes aircraft or satellites, and the transmission takes place extremely fast through optical free-space communication. The LMU experts heard about this and simply contacted us in this regard. We were immediately excited about the idea, and the skills of both teams have complemented one another quite well.

How difficult was it to implement quantum technology into a DLR research aircraft?

That was indeed complicated – the project took more than 1½ years. Among other things, we had to install – in both the ground station and the Dornier 228 propeller aircraft – a special glass dome, while making sure that all of the applied optical components were carefully aligned and that they did not interfere with the polarisation of the light quanta.
Furthermore, the laser beam from the research aircraft to the ground had to be thoroughly bundled – with alignment precision in the range of one-thousandth of a degree.
An ingenious system made of lenses and mirrors assured that the beam was continuously aimed – with the aid of GPS coordinates and optical tracking – at the ground station.

And how did it go with the crucial experiments?

After successful tests at ground level, we were convinced that the experiment would work in the air as well. We flew at night with the new moon, since both daylight and the light from the moon would have caused too much interference. The research aircraft then flew semicircles around the ground station at a distance of 20 kilometres and an altitude of up to three kilometres. We flew in this manner during three nights in March; it was really cold, and particularly for the personnel at the ground station up on the roof of our institute. But the results were still encouraging – enough photons arrived to be able to create a key, meaning that the principle actually worked.

And what happens now – what is your next step?

We would like to test this technology in outer space. Either we could equip a satellite – that is about to take off soon and has enough space – with our components, or we could also possibly execute an experiment with our own, more economical mini-satellite. At the moment we are involved with raising sufficient research funds – and we all hope, of course, that winning the Erwin Schrödinger Prize will provide us with a bit of tailwind.

In the Project “Air-ground quantum key distribution“, two teams joined together from different fields to facilitate tap-proof transmission of data between a ground station and a research aircraft. The four-scientist working group led by Harald Weinfurter from the Ludwig-Maximilians-Universität München (LMU) provided their expertise in quantum cryptography – a sophisticated method in which a digital key is transmitted, absolutely secure, by means of individual light quanta. The six-scientist team led by Florian Moll from the German Aerospace Center (DLR) in Oberpfaffenhofen contributed their experience with fast, light-based data communication involving moving targets. In close collaboration, the two teams were able to pack the respective technology into a research aircraft and to exchange a digital quantum key between air and ground – an important step towards the development of tap-proof satellite communication. The researchers received for their joint project this year’s scientific award from the Stifterverband – the Erwin Schrödinger Prize.