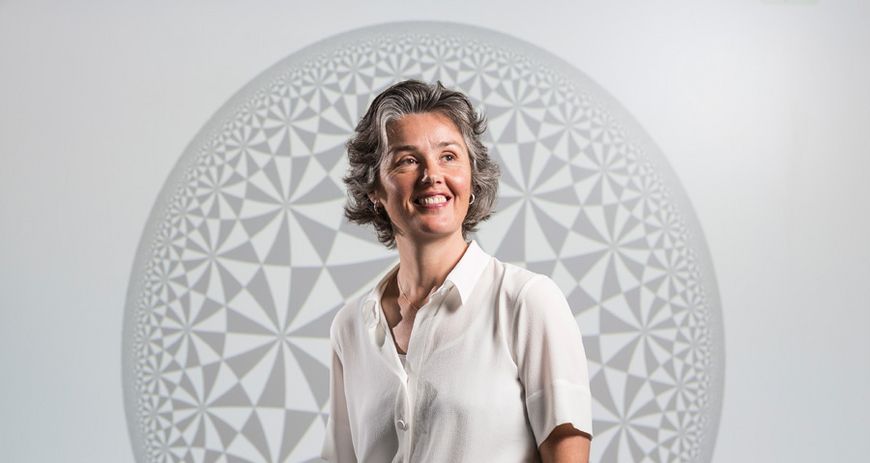 Barbara Terhal’s research focuses on the computers of the future. They will be many times faster than today’s models. When she tells people outside the field about her work in quantum physics, they often respond with questioning looks. “But it really isn’t that difficult,” she says with a broad American accent.

A structure next to her desk is the first thing that catches your eye. Made from folded paper, it looks like a star and is just a little larger than an outstretched hand. Terhal smiles – “origami is a hobby of mine,” she tells me. She folded the little structure herself, and when she has visitors it often serves as a way of introducing the serious subjects involved in her research. As she explains, it’s a small stellated dodecahedron – a geometric model with twelve points, each an equal distance apart: “A quantum error correcting code can be visualized in a similar way, and that’s exactly what I’m working on.”

Barbara Terhal’s research at Delft University of Technology and Forschungszentrum Jülich is in such a complex field that nonspecialists often don’t even understand the questions being researched, let alone the scientists’ findings. Quantum physics is a subject matter both Einstein and Heisenberg investigated. Once, when Heisenberg was asked how quantum physics should be understood, he responded bluntly: “Don’t even try!” Hearing this quotation today, four decades after Heisenberg’s death, Terhal shakes her head: “At that time, discussions about quantum mechanics were more philosophical – especially when it came to the question of what its actual purpose was. Today, we’re focused on applying the formulae to build better computers.” She rejects the idea that quantum physics is an incomprehensible mystery, asserting instead that it is a mathematical formalism we can get used to.

The 48-year-old Dutchwoman with shoulder-length hair has long since become accustomed to the questioning looks she receives when talking about her work to laypeople. She speaks in a calm voice and chooses her words carefully – after all, having worked in this field since the beginning of her career and having become one of its pioneers, she has been giving these kinds of explanations for many years. Whereas conventional computers use bits in their computations, which can only accept the values “0” or “1”, a quantum computer works using quantum bits. These units – also known as qubits – can accept any number of intermediate states, characterized by unique quantum properties such as entanglement and interference. As a result, experts predict that quantum computers will one day be able to store and process quantities of information unlike anything handled by the computers commonly used today.

Barbara Terhal and her team aim to remove one of the biggest obstacles standing in the way of this advancement. Qubits are susceptible to errors, which makes quantum error correction necessary: precise patterns that can be used to build error-free qubits from error-prone ones. Terhal talks about this so frequently that she now condenses the English term “quantum error correction” into a single word. The physicist speaks with a broad American accent – a hangover from the more than ten years she spent doing research in the US. Terhal worked at computer technology firm IBM’s Watson Research Center for several years as well as at the prestigious California Institute of Technology in Pasadena. “When I started this work, hardly anyone knew anything about the field of quantum information,” says Terhal. She had simply been in the right place at the right time when it came to looking for a topic for her doctoral thesis at the University of Amsterdam. She considered neural networks and biophysics before she found a professor who wanted to move into the new field of quantum information. “Because the subject area was so new, I soon wanted to join a group of researchers who had more expertise in the field,” she explains – and ended up at IBM, working in the company’s superbly equipped laboratories. It was the period during which quantum computer research was advancing in leaps and bounds: Concrete results became tangible, a lot of money flowed into research, and a number of academics began to specialize in the field in which Barbara Terhal already had a head start of many years.

“I find that physics is much like climbing a mountain,” Terhal says. “You’re faced with a wall of rock, and somehow you have to get to the top. You can see a lot of people on the crag who have found a route on one side and are climbing up it. You can follow them, learn something from them – but maybe you want to find your own way up.” Each step you take along your own path on a climb like this is vitally important; you must never lose your balance, but you will be rewarded with an amazing view when you reach the summit. “That’s where you get to see things that no one else in the world has seen – that’s discovery!” she says, beaming with joy.

An international collaboration focusing on quantum information and quantum computing is now centered around Forschungszentrum Jülich. One partner is RWTH Aachen University, where Barbara Terhal previously held a professorship, and another is Delft University of Technology, which is where she has been researching and teaching since 2017. She also continues to work in Jülich. Terhal believes that the combination of publicly funded research in Jülich and the research in Delft, in which Microsoft, Intel, and other companies are involved, is ideal. As part of the international collaboration between Aachen, Jülich, and Delft, multiple teams are working on a range of problems concerning quantum computers. “My personal goal is to get quantum error correction up and running,” says Terhal – “that’s a very real task.”

Terhal’s three children also played a role in her return to Europe in 2010 – the twins are now 15 years old, her older daughter 18: “I loved spending my childhood in the Netherlands,” she says, “and I wanted my children to have that opportunity as well.” So she and her husband came back. David DiVincenzo is also a successful quantum physicist, and he too works at RWTH Aachen University and Forschungszentrum Jülich. The couple has published some sensational papers together. But having a partner who understands the complex research subjects is not essential for a happy relationship, as she explains, laughing: “There are so few women in quantum mechanics – so, if that were the case, most of the men would never be able to get married!”

One of the reasons behind her move from IBM into the academic world was that it would give her the opportunity to work with the upcoming generation of researchers. Barbara Terhal recounts how students often come and join her in her office. This brings her back to her analogy between physics and mountain climbing: “They want to get to the top of those rocks as soon as possible. But some are too impatient, they fall, or they simply follow the herd up the well-worn paths.” She prefers to find her own way.

Asked whether she has ever experienced the feeling of summiting a mountain in real life, Barbara Terhal shakes her head: “No, that’s not for me.” Then she bursts out laughing and adds: “To be quite honest, I’m afraid of heights!”