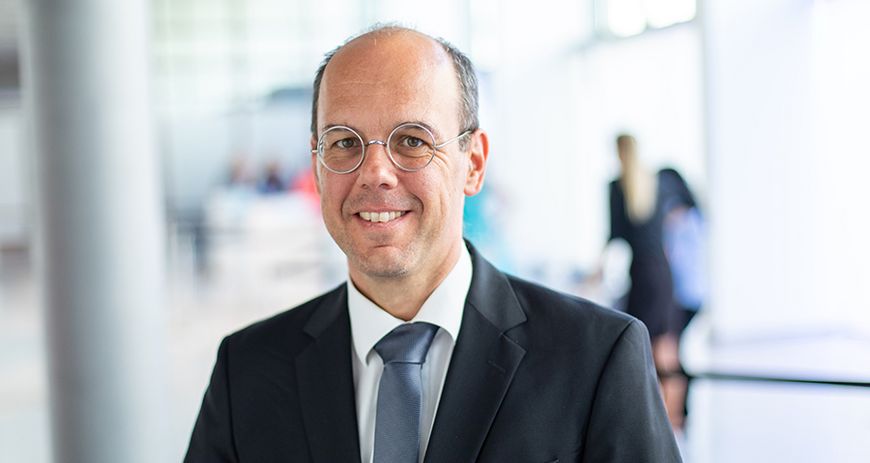 Originally Tommaso Calarco studied music before moving on to the natural sciences. Today, the Jülich quantum physicist is one of the most influential representatives of his field as author of the European Quantum Manifesto.

Even when Tommaso Calarco talks about how he gets his household in order, you immediately hear that he is a physicist. "In the past few months I have taken all the objects in the garage and in the basement in my hands and tidied them up", he says and immediately adds: "There are theorems that say that this is actually completely impossible! And then follows the mischievous smile that has become the trademark of the Italian when he talks about himself and his work.

Tommaso Calarco almost almost became a primary school teacher. Today, when the world-renowned quantum physicist at Forschungszentrum Jülich heads the Institute of Quantum Control at the Peter Grünberg Institute and holds a professorship in Cologne, the beginning of his career sounds like an innocuous anecdote, but back then it was a difficult decision: The 51-year-old's studies at the universities of Padua and Ferrera were coming to an end and his wife - whom he has known since the first grade of elementary school - was rooted in a music school in the Italian region through her student job. "In physics we call this a 'two-body problem'", says Tommaso Calarco and laughs again: the two histories had to be synchronized somehow. "The University of Innsbruck is two hours away from our home, and there is a very good department of quantum physics there," says Tommaso Calarco. So he introduced himself - and already knew at the job interview that he would switch to teaching, at home in Italy, in case he was turned down. But he got the job and his rise to become one of the most influential quantum researchers began.

Tommaso Calarco has this influence above all because he knows how to bring together the European luminaries in his field - and to translate this concentrated know-how into political decisions. The fact that a billion-euro flagship program on quantum technology has been created in the EU is also due to him. "In 2014, I asked some of my colleagues to talk to Günther Oettinger, who was then Commissioner for the Digital Economy and Society," recalls Calarco. His goal in the interview: to convince the EU politician that, in addition to the two existing EU flagship projects on the brain and graphene, quantum technology would also deserve such large-scale funding. "We met him in a hotel at Stuttgart main station. I had 30 minutes and was really nervous," says Tommaso Calarco. He managed to get Günther Oettinger interested - and he asked to transform the oral presentation into a more substantial paper. Within a very short time, Calarco formulated the "Quantum Manifesto", a 20-page essay. "Europe now needs a strategic investment to lead the second quantum revolution," it says. This paper is a fiery plea - for vigorous research in Europe itself and not leaving the field to the Americans and Chinese. And for closely linking research and industry in the field of quantum technology. 3,600 quantum researchers from all over the EU subsequently signed the manifesto - and the European Union put together a research project worth billions.

"In quantum technology, both the philosophical-theoretical and the very tangible come together. This combination fascinates me," says Calarco. He turned down a position in Brussels, even though it was available, because he was not interested in just being an administrator. "Research in quantum physics always reminds me of how I used to play with Lego bricks as a child. You tinker until something is created. There's a tremendous playful fascination with it."

Sometimes, when philosophy and technology become too much for him, Tommaso Calarco reaches for his guitar. He always has it ready to hand at home - "I have a bachelor's degree in classical guitar from the time before I studied physics," he says. And when he has time, like the other day at Corona Lockdown, he not only cleans up his basement, but sits down in the living room with his wife and two 15- and 20-year-old children and sings a madrigal.

"Now during the summer vacations we were in Italy and our friends asked us: Hey, are you happy there in Cologne?", says Tommaso Calarco. "We answered in unison with yes. His wife now has her own professorship as a linguist in the cathedral city, so the two-body problem has once again been solved. Only sometimes Tommaso Calarco is at odds with the northernmost city he has ever lived in: "It might rain a little less in Cologne!

On 12.10.2020 from 14:00 to 16:00 o'clock the Helmholtz annual conference takes place. This year it will be virtual, at three locations and open to everyone. Among other things, it will focus on how quantum technologies are changing our world. Thommaso Calarco will also be a guest. Further information and the complete program can be found behind the following link: