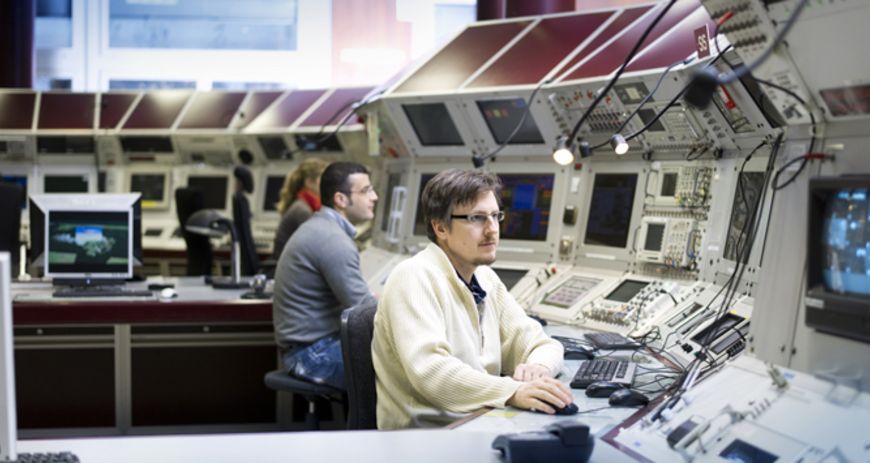 Lord of the rings

As a child, Jens Stadlmann enjoyed tinkering with bicycles, and today he takes care of the particle-accelerator facilities at the GSI Helmholtz Centre for Heavy Ion Research in Darmstadt. For this purpose he arrives sometimes in the control room at two A.M. and fiddles about with technical problems.

Whenever Jens Stadlmann is working, he seems to be the commander of a large spaceship. Blue illuminated monitors, countless buttons and switches tower over him in the control room.  At the slight touch of a button, powerful forces are released. Of course, the facility cannot fly, but it can do just about everything else. The room belongs to the GSI Helmholtz Centre for Heavy Ion Research in Darmstadt, and Jens Stadlmann works there as accelerator physicist. It is his task to keep the facility operational and develop it further.  At GSI, a new ring accelerator with numerous storage rings will be built. “A lord of the rings”, as Stadlmann says in jest.

In order to plan such a facility, it has to be considered what and how research scientists will want to investigate in future years, since the construction is dependent on this. Jens Stadlmann enjoys tackling such issues. Stadlmann is a generalist – instead of specialising in one individual topic, he prefers to focus on the overview. Technology has always interested him: As a child he tinkered with his bicycles and later on he repaired cars. His father is an engineer and communications technician. “As a son, you have to do something else”, Stadlmann says, so he studied physics. But the technical aspects are more interesting for him in this subject as well. He wrote his PhD thesis at GSI, but had not planned on staying there. The department head convinced him. “He explained to me that I am an accelerator physicist”, says Stadlmann.

And now he is able to combine his interest in natural sciences and technology. He began at GSI in 1998, and from 2002 he was in the accelerator department. It took about four years for him to become acquainted with the facility. Three people are needed in the control room for normal operation, but when researchers have special requests for their experiments, it frequently becomes more. Jens Stadlmann is a communicative person, which is necessary since he has to coordinate so many things – both his operators who control the GSI accelerator facility, as well as the international research scientists who carry out their experiments here.

GSI is one of the few facilities that can accelerate every element in the periodic table – even unusual ones such as gadolinium or samarium. Work is done in shifts, and Stadlmann’s workday has two phases. On days when the ring accelerator is in operation, he has to assure that the routine is trouble-free. If it is not in operation, he coordinates renovation tasks. He always has a beeper at his side. He is awakened at night approximately every two weeks because there is a technical problem that has to be solved. If he is not able to solve it on the telephone, he drives out to GSI. He then meets and has a discussion with five or six colleagues in the control room at around two o’clock at night. “Research groups spend about one year in preparation for their three weeks with us. Once they are here, everything has to work”, says Stadlmann. When he is not at work, he takes photos, writes programmes or listens to rock, heavy metal and alternative music “like all physicists”. Stadlmann is a Star Wars fan, sports marksman and hunter. Since the beginning of this year he has also become a father. His wife works at GSI as well, in the Public Relations Department.