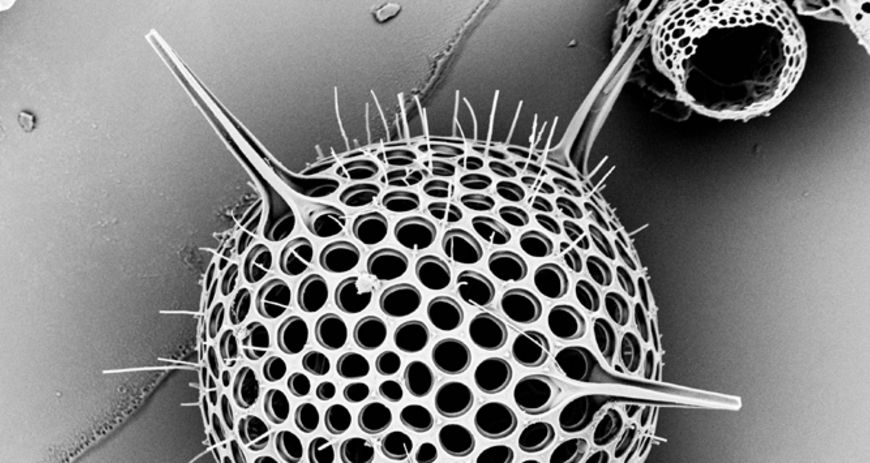 <b>Algae as a model for lightweight construction </b> Scientists at the Alfred Wegener Institute Helmholtz Centre for Polar and Marine Research (AWI) adopt the structures of diatoms (freshwater algae) as a model. Photo: AWI

For the ELiSE Procedure, the group of scientists and engineers led by Christian Hamm take nature as their model to create building components in an entirely new manner.

The diatom is a superhero. It has developed itself so far through millions of years of evolution, that today the approximately 100,000 different species have integrated two highly significant characteristics. They are very light since they require sunlight and therefore cannot sink too low in the water. At the same time they are quite stable – allowing them to protect themselves from their predators. Such a structure – if it were the size of an automobile – would be so strong that one could stack up 4,000 other cars on top of it.

When Christian Hamm discovered this, he was excited. Hamm has been employed since his doctoral thesis in biomechanics at the Alfred Wegener Institute Helmholtz Centre for Polar and Marine Research (AWI). He has been conducting research on microorganisms and their natural characteristics. During his post-doc period, the idea occurred to him that one could also make use of their amazing structures for technology. About ten years went by until the idea was developed into a procedure that involved transferring nature’s design principles into lightweight construction.

It is called “Evolutionary Light Structure Engineering”, ELiSE for short. A highly competent team consisting of engineers, bionic engineers and biologists is working with this procedure at AWI. Instead of merely optimising components, the multi-disciplinary team imagines them in an entirely new way. The ELiSE Procedure follows a non-varying sequence. First, the team has to understand precisely how the customer’s product functions so that they can optimise it – for instance the strut behind the driver’s door in an automobile. Then analyses are carried out together with the customer to discover which forces have an effect upon the product, how and from where.

The next step is the screening procedure: They search for biological structures in a databank that is capable of providing the desired characteristics for precisely those requirements; the Alfred Wegener Institute has plenty of illustrative material to choose from. On hand is a scientific collection of more than 100,000 specimens of planktonic organisms that is continuously updated. Once they have found a promising model, they initially develop a variety of draft designs for the customer. The structure is simplified and the best elements are adopted.

In the last step, they continue to alter individual parameters – they make it, for example, thicker or thinner. “We play at evolution,” says Christian Hamm. They simulate in the computer whether their product would be able to withstand the demands. In the process, they also take into consideration the fact that the product must be capable of being manufactured at high-quality and low-cost. For the strut, they have developed a new kind of sheet metal that is quite thin and very light, but gains its stability from a fibre-composite structure in the interior – just like the diatoms.

“The industry is looking for short-term, quickly-produced solutions,” says Hamm. “Our solutions are frequently unconventional and more complicated.” That they would be better because of it, must be proved by his team. There are presently 13 researchers working for ELiSE, some part-time and others parallel to their studies. The lightweight solutions are currently being developed at AWI, but a spin-off is also possible over the medium-term. In order to independently assert themselves in the open market, they would however need more staff. But very good engineers in particular are in high demand in the labour market. “We are competing for these employees with industry, which can pay higher wages than the public service sector,” says Christian Hamm.

Nevertheless, they are receiving more and more orders from various industrial enterprises. They have thus optimised diverse components for the automobile industry: for a wind turbine in the ocean, they were able to develop a 50 metre-high pedestal that was almost 50 percent lighter than its conventional predecessor, and with the Bionic Bike they have developed the lightest aluminium collapsible bike in the world, the frame of which only weighs around two kilos. It was introduced only recently during Environmental Week (“Woche der Umwelt”) in Schlosspark Bellevue. “Those innovations that are systematically and earnestly orientated to nature are efficient, aesthetic and can be ideally marketed,” says Christian Hamm.

So far, the automobile industry in particular has proven to be an interesting market for the ELiSE Procedure, since lightweight construction is in very high demand there. In the future, they will also develop further solutions for the aviation and ship-building industries.

The ELiSE Team is advertising extensively for the procedure, writing directly to enterprises, exhibiting at trade fairs while at the same time making sure that research itself is not neglected. About 50 percent of Hamm’s time is invested in the ELiSE Procedure. But he is also developing further strategies for technology transfer with AWI, so that future results from his research can be implemented in industrial products later on.

The future for the ELiSE Procedure is looking very attractive says Christian Hamm. In reference to nature’s own structural designs he says: “To date we have only come to understand a small fraction.” The reservoir of undiscovered opportunities is accordingly huge. Currently, the team is examining the nanostructures of diatoms because not only their geometry, but also their material is highly efficient. Due to the special construction, the lightweight silica has a higher tensile strength than high-strength steel. “It is such a sophisticated design that we expect great things to evolve,” says Hamm. If it proves possible to emulate this material, one could build non-breakable mobile phone displays that are bendable, for example – or buildings that we haven’t even imagined yet.