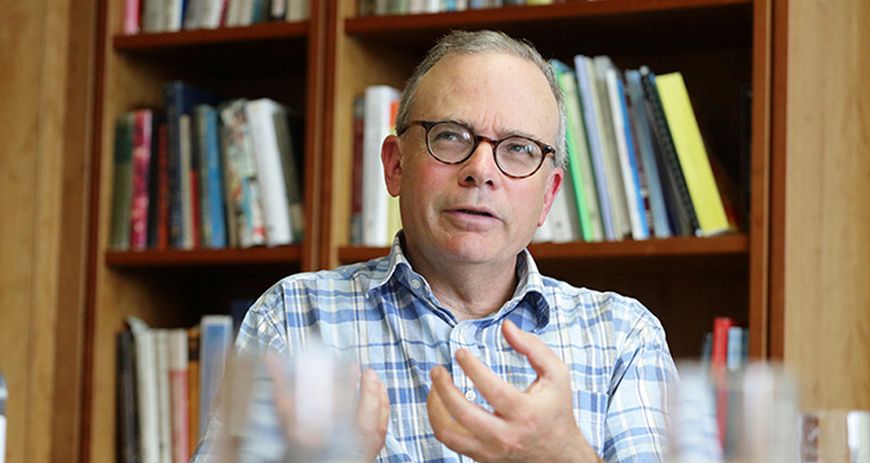 “Doors to a whole new world”

Even though there are still “a few problems”, the quantum computer is coming. David DiVincenzo is sure of it.

When Werner Heisenberg was asked how one might visualize quantum physics, he said, “Don’t even try.” Did that ever give you pause?

Oh, these old quotes. They’ve been obsolete for a long time. It was once said that only six people in the whole world could understand the theory of relativity, and today it’s not much of a mystery. By the way, quantum physics and the theory of relativity do have one thing in common: If you spend time thinking about them, they will take you out of your everyday experience, because everyday rules don’t apply to them.

Let me take you back a few decades. Think of the first computing machine, the 1946 ENIAC computer, which filled an entire room. Then there was an innovation, and then another, and computing power kept growing as computers got smaller. In today’s supercomputers, computing power equal to ENIAC’s takes up a single millimeter. But the functional principle remains the same. Now we are stepping back a level and working on a completely new functional principle. These new computers will be as far removed from today’s supercomputers as the supercomputers are from the first computing machines.

A tremendous advance. What will make it possible?

Here’s a rough explanation: Today, computers do their calculations with bits, which can assume a value of either “0” or “1”. A quantum computer uses quantum bits, or qubits. They can assume any number of intermediate states. This will allow quantum computers to store and process enormous amounts of information.

That sounds simple. What’s the catch?

Before practical implementation, we do have a few problems to solve: For example, we have to retain the qubits’ quantum states for longer than we have been able to so far. We will have to entangle lots of qubits, and we need an algorithm that will correct quantum computer calculation errors. These are all problems that our research teams are currently working on.

When will we start working with quantum computers?

I don’t think that there will be a hard transition. You can see it already: For example, IBM recently put a quantum computer with 16 qubits into operation, and Google has announced a 49-qubit computer for next year. Those are prototypes, of course, and are still being researched. Just 100 qubits would outstrip anything that can be done using today’s conventional computers.

Will the quantum computer, with the enormous computing capacity we expect it to have, change the way people live?

That question will have to be asked at a much earlier stage, and not just about quantum computers. Today, we are discussing autonomous systems such as self-driving cars, artificial intelligence, and other phenomena – they all open doors to a whole new world. Quantum computers are only one part of that. You know what that reminds me of?

There was supposedly a conversation between the physicist Michael Faraday, whose discoveries laid the foundations for the electrical industry, and the British prime minister. The prime minister asked, “What good is it [electricity]?” And Faraday answered, “I know not, but I wager that one day your government will tax it.” We will get to a similar point with quantum computers.