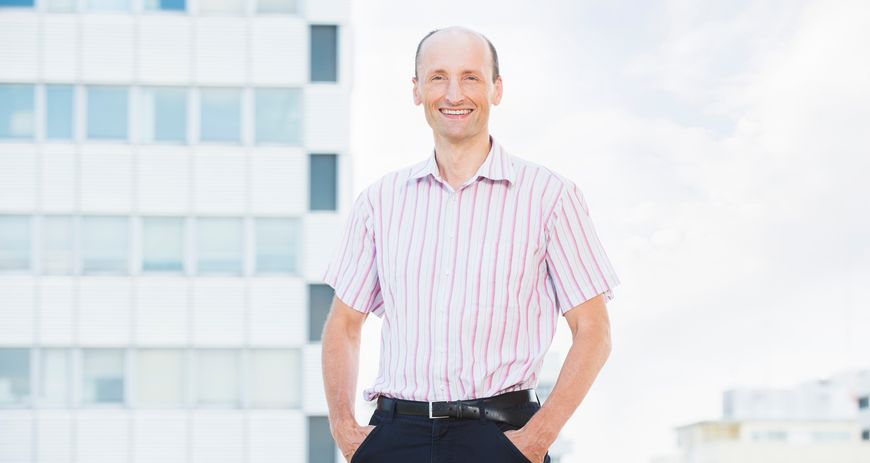 Wolfgang Wernsdorfer is a pioneer in the fields of nanomagnetism and single-molecule magnets. Image: KIT

A trailblazer in his second career

Physicist Wolfgang Wernsdorfer was awarded the Leibniz Prize in 2019. He began his career as an apprentice electrician—and learned things he still uses in his current research into the computers of the future.

Before she agreed to marry him some 20 years ago, Wernsdorfer’s wife set one condition: “She told me I wasn’t allowed to stay at the lab overnight,” he says with a hearty laugh. “The agreement was that I couldn’t be in bed any later than when her alarm went off in the morning so she could get to work on time.” It’s been many years since Wernsdorfer, who’s now 52, made this promise and had to get used to a new rhythm of work.

Before he got married, nights were his favorite time to take measurements in the lab. The discovery that was to make him a world-renowned pioneer in the field of quantum nanomagnetism also came about during one of his night shifts: The year was 1998, and Wernsdorfer was working with a special molecule (a so-called single-molecule magnet composed of eight iron atoms) when he identified magnetic properties in the molecule that could potentially be used in quantum computers. He immediately realized that he’d made a breakthrough. “I was so excited that I couldn’t sleep for three days; I just kept measuring,” he recalls—until finally his future wife put a stop to his night shifts. But having these rules applied to his schedule didn’t make Wernsdorfer any less successful as a scientist.

When he made his discovery with the iron-8 molecule, he was working in Grenoble, France, where he also subsequently served as research director. He has been back in Germany since 2016, when he received the prestigious Alexander von Humboldt Professorship. Since then, he has been working on building a platform for quantum spintronics at the Karlsruhe Institute of Technology (KIT). Wernsdorfer’s field of research is one of the most complex areas of physics. A major goal in this field is to develop electronic circuits for quantum computers, which are eventually expected to far exceed the processing power of today’s computers. A key component is what are known as qubits: While classical computers work with bits that always have a value of zero or one, the smallest computing units that quantum computers use are qubits, which also include values between zero and one. As a result, these computers can carry out numerous computing steps simultaneously.

As Wernsdorfer discusses his work in his office on the fourth floor of the “Physics High-Rise” at KIT, he isn’t all that far away from where his career began. He is the second of seven siblings; his father was a goldsmith in Würzburg, Germany. “I grew up in a typical trade environment. Back then, we thought going to Gymnasium, which had a more academic focus, was only for smart alecks,” Wernsdorfer recalls. He completed general secondary school and began an apprenticeship as an electrician at a workshop when he was 15. “One of my coworkers there went on to vocational prep school, and I had always done better than him during the apprenticeship. So, I thought, I can do that too!” Wernsdorfer gradually completed his entrance exams for university despite initially taking a different path, and after doing so, wanted to earn a degree as well. “Biology and chemistry involved too much rote learning for me, and I wasn’t good enough for mathematics,” Wernsdorfer says today—and it almost sounds like he’s kidding when he adds, “so physics was the only thing left.”

The electrician’s assistant kept working his way up; he soon discovered that he was one of the best on his course. After completing six semesters, he applied for a scholarship in France. “The borders in Europe were just beginning to open up back then, and I thought something interesting was bound to happen if I went there.” And he was right: He completed his degree in France. Because Wernsdorfer was studying at one of the elite colleges in Lyon, a number of labs were eager to have him do his PhD with them. He completed his doctorate in two years, and more opportunities opened up for him after that. As a result, he stayed in France, and his four children aged 11 to 20 grew up bilingual.

“Even though I’ve been back in Germany for nearly three years now,” says Wernsdorfer, smiling to himself, “I still find it difficult when I have to give lectures in German.” For two decades or so, he published papers in English and taught in French — “I speak German like an electrician!” That said, the topics he speaks about are as complex as you’d imagine. For example, when he explains why his platform for quantum spintronics is so unique: “There are various ways of building qubits. The most common methods right now involve semiconductors or superconductors. What’s different about my work is that I look at molecular systems as well.” In other words, Wernsdorfer analyzes which materials can be used to process quantum information. Semiconductors or superconductors have typically been used for this so far. Wernsdorfer discovered that some molecules can also carry out this task — and is tapping into a new class of materials for quantum physics as a result. This represents a breakthrough, and it’s one he laid the groundwork for back when he was working through the night on the iron-8 molecule. “My hope is that the molecular systems will eventually be better than the semiconductor and superconductor systems because molecules are smaller and cheaper to produce.”

Wernsdorfer’s circle of colleagues who specialize in this area is pretty small: He estimates that it includes five good groups of physicists and says there are some 40 chemistry groups, around half of whom work with him and his team. The latest high point in his career reflects his outstanding reputation in the field. This year, Wernsdorfer was awarded the Gottfried Wilhelm Leibniz Prize by the Deutsche Forschungsgemeinschaft (German Research Foundation), which is worth 2.5 million euros.

Seen from this pinnacle of scientific achievement, was his training as an electrician a detour? Wernsdorfer responds by pointing to the wall facing him as he sits at his desk, which has an oversize folding rule hanging on it. “I used that when I was an electrician and always kept it in the lab in Grenoble. My colleagues found this funny, so they made me a wooden replica five times the size of the original as a going away present,” he laughs. The model is ten meters long and says a lot about the physicist: One of Wernsdorfer’s recipes for success is that he has designed and built much of his lab equipment himself. He describes his dexterity, along with an intuitive sense of how something needs to be built in order to work, as things he’s carried over from his work as a tradesperson. Anytime he has a free moment, Wernsdorfer descends the two floors to his lab so he can do some work. “I don’t want to get out of practice. My ambition is to be better in the lab than the students.” Wernsdorfer pauses for a second before adding dryly: “But sometimes they still catch up with you!”

At least now he can put in a night shift here and there without his wife protesting — because she has stayed behind in Grenoble with the couple’s children. “When I’m in Karlsruhe, I mainly work in the lab and put all my energy into that,” he says. “When I go to France, which is at least every two weeks, I concentrate completely on my family.” And his favorite hobby, mountain running. Wernsdorfer says the main disadvantage in Karlsruhe is that there aren’t any mountains, so he only really trains when he is in the Alps. He’s just registered again for the legendary mountain run in Grenoble, which is scheduled for the summer. The race covers a distance of 160 kilometers with a rise and descent of 11,000 meters in elevation and takes around 40 hours. “When you understand what your own body needs and how it works, you can find your own recipe for success as a runner,” says Wernsdorfer — which, he notes, is basically exactly how it works in the sciences.