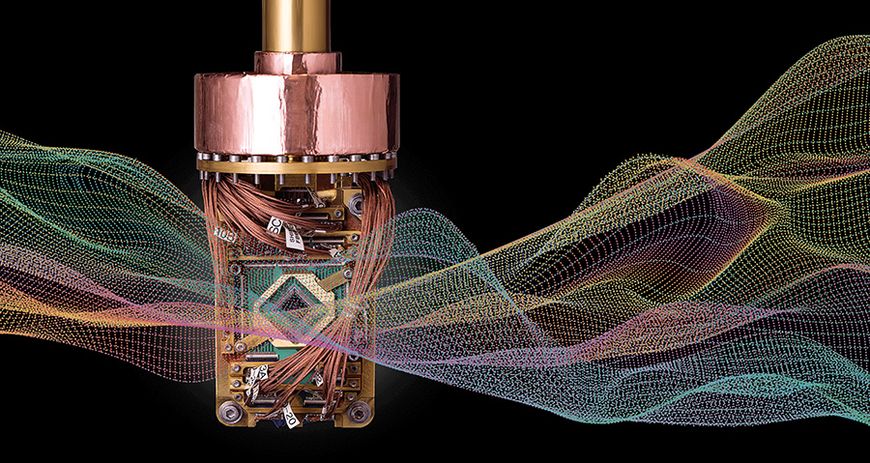 Quantum technologies will revolutionize the economy and society in the future. Helmholtz is pooling its expertise in the field and creating a unique platform.

Thousands of researchers around the world are working on a gigantic goal: a new kind of computer that cracks tasks that all classical computers fail at. The bizarre laws of quantum physics are supposed to help the "quantum computer" achieve incredible computing speeds. Today, utopian breakthroughs await, for example in materials research, in the optimization of highly complex logistics or traffic flows, or in the simulation of chemical reactions. For example, the quantum computer could provide the key to a more climate-friendly production process for artificial fertilizers.

But in a garage, as once Apple's first personal computer, the quantum computer will certainly not arise. The technology behind it is far too complex for that. The project is more like the first moon landing. "The quantum computer is an extremely ambitious vision," says Tommaso Calarco, coordinator of Helmholtz Quantum. "It can only be done in a concentrated way and a joint effort," the physicist says, adding, "Researchers, industry and politics need a common language and clear plans." The Helmholtz Association is taking up the challenge. It has established a platform called "Helmholtz Quantum" to pool all its quantum expertise and follow a common strategy.

This fits into a highly dynamic national and international environment. Researchers and industry are already testing prototype quantum computers to learn how to use them. The Fraunhofer-Gesellschaft bought one of these from IBM, which is now being used by companies such as BASF and Bosch. Now the goal is to build powerful quantum computers. The research teams behind "Helmholtz-Quantum" want to do that in Germany and also develop the appropriate software.

But not only that. The effects of quantum physics are very versatile. They can enable many technical breakthroughs. Currently, a whole branch of technology is emerging, the "quantum technology". This includes sensors with previously unattained accuracy or a network for tap-proof communication, which will one day become part of a worldwide quantum Internet. The German government also sees quantum technology as crucial for Germany as a research location and is funding it to the tune of two billion euros by 2025.

The quantum computer thrives only in an ecosystem

Helmholtz-Quantum sees itself as a player and focal point in the development of quantum technologies, from basic to applied research, such as new methods for medical imaging or more precise navigation devices. "After all, it is the brand essence of the Helmholtz Association to provide a central infrastructure for research," says Frank Wilhelm-Mauch of Forschungszentrum Jülich. Thus, the country's first quantum computer will be open to interested researchers from science and industry. After all, building a powerful quantum computer requires not only excellent researchers, but also engineers and users to try out application ideas. "You have to think big," says Ferdinand Schmidt-Kaler of the Helmholtz-Institute Mainz.

Some 500 researchers at several Helmholtz centers are already researching many aspects of quantum technology. In the process, they are breaking new ground. That's because quantum technologies need new materials to harness the fascinating quantum effects. Take quantum computing, for example, the flagship of quantum technologies. Instead of using classical bits, which can only accept the values 0 or 1 one after the other, it works with "qubits" that work with both numbers simultaneously. It is still open what kind of qubits a practical quantum computer will have. The Karlsruhe Institute of Technology (KIT), for example, is developing qubits from individual molecules. Qubits can also be constructed from semiconductors, which could be advantageous for mass production. The Helmholtz-Zentrum Dresden-Rossendorf (HZDR) is working on such qubits, which are also suitable as sensors.

A quantum computer also requires special software, such as that being developed at the Jülich UNified Infrastructure for Quantum computing (JUNIQ). JUNIQ already offers German and European researchers from science and industry access to simple quantum computer prototypes.

However, qubits can not only calculate, but also transmit data in a tap-proof manner, because they cannot be read out unnoticed. The German Aerospace Center (DLR) wants to make this "quantum cryptography" available over long distances and is researching, for example, the exchange of qubits between the ground and aircraft or satellites.

"We have quantum enthusiasts across the board."

A central role for Helmholtz Quantum

"We have quantum enthusiasts in all fields," says Ferdinand-Schmidt-Kaler, summing up the Helmholtz Association's extensive expertise. Helmholtz Quantum is now intended to bundle this potential and make it visible.

After all, part of the Helmholtz Association's mission is to have an impact on society and to help tackle the major challenges of our time. Quantum technology thus requires a collaborative effort. "We are currently good in Germany at building individual components for quantum technology," says Wilhelm-Mauch. However, he adds, there is a lack of a "system integrator," that is, an institution where the threads come together.

In Germany, Helmholtz-Quantum could take on this role and facilitate exchange between industry, politics and society. "We all want to see effective progress in quantum technology," says Thomas Strohm of Bosch, which is researching quantum computers and quantum sensors. "That's why we need to coordinate," the physicist adds. Internally, Helmholtz Quantum is also closing the gap between basic research and application: At the new Helmholtz Quantum Center in Jülich, researchers are working on everything from new quantum materials to complete quantum computer systems.

In doing so, the experts at Helmholtz-Quantum always keep in touch with the world of quantum technology. They have excellent national and international networks. For example, Tommaso Calarco worked on the German government's Roadmap Quantum Computing and was a driving force behind the European Union's "Quantum Flagship", a large-scale, long-term research project on quantum technology. Helmholtz-Quantum researchers collaborate on projects with scientists at universities and research institutions around the world.

Despite the overarching goal, the diversity, flexibility and openness of quantum research in the Helmholtz Association remains intact. The strategy comes from the research community, Calarco says. "The antennas will continue to stay up," the physicist assures. For example, he says, there are people at each of the participating Helmholtz centers to whom researchers can turn with their ideas.

The strategy is geared toward an early, visible success. The next major milestone, which would cause a worldwide sensation, would be the demonstration of a "quantum advantage": when a quantum computer solves a practical task faster than any classical computer for the first time. Researchers from the Helmholtz Association have already proven that they can make a significant contribution here: They were involved in Google's demonstration of so-called "quantum superiority." In 2019, a quantum chip from the tech company solved a task for the first time much faster than even the world's fastest supercomputer could have. However, it was a purely academic problem with no applicable use. But the success is spurring researchers around the world to achieve a practically useful result by quantum computing faster than otherwise possible. A favorite for this is the simulation of complex chemical reactions, such as those that take place in e-car batteries. Such a simulation could result in a new material for a battery with higher storage capacity. The first German quantum computer has a good chance in this race. "We want to achieve the quantum advantage by 2026," says Frank Wilhelm-Mauch. He sounds confident of success.