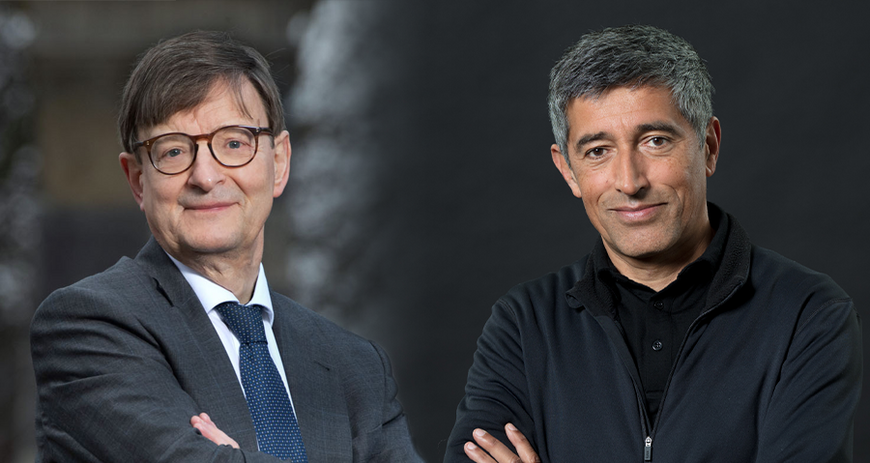 Science journalist Ranga Yogeshwar and Helmholtz President Otmar D. Wiestler discuss the role of science communication and mistakes made during the coronavirus pandemic.

When the coronavirus pandemic broke out, many people talked of a renaissance of science communication – after all, they argued, there was a tremendous amount of interest in facts. Has this initial hope been realized, Mr. Yogeshwar?

Ranga Yogeshwar: I see many downsides. Yes, the scientific community is playing a vital role in this crisis; without it, we would have no vaccine, no coronavirus testing, and just the merest overview of the different mutations. We’ve had a year in which scientists have been very prominent in the media. But at the same time, the voice of science journalism could barely be heard. In my opinion, this is the result of long-standing willful neglect – systematic cutbacks have been made in science departments in the media over a period of years. But it’s precisely those science journalists who are able to explain things really well and in a way that can be easily understood. And so, the talk show guests were largely scientists – many of whom have no extensive experience with mainstream media.

Otmar Wiestler: It was a year in which we learned a lot in terms of science communication. My initial assessment is positive. First of all, awareness of scientific subjects, especially of coronavirus research, has increased enormously. Second, we have seen many talented communicators emerge from the ranks of research scientists who take the task of sharing knowledge very seriously and can explain complex issues well. And third, I get the impression that fact-based, scientific advice is valued very highly.

Mr. Wiestler, do you also see shortcomings, as Ranga Yogeshwar does?

Otmar Wiestler: Yes, of course. We have learned a hard lesson when it comes to dealing with different media. The coronavirus pandemic and communication on the subject have made it clear once again just how omnipresent media and information are, and thus the degree to which we need to communicate selectively in line with a meaningful attention economy. The use of a wide range of different media has a major role to play here. We need to take a more targeted approach to reaching out to people who are skeptical about science and have limited interest in it.

Take us behind the scenes – have the phones been ringing off the hook at Helmholtz with large numbers of inquiries from journalists during the pandemic?

Otmar Wiestler: There was an enormous surge – above all in the Centers that are actively engaged in health research, of course. They have had ten times as many inquiries as before, even more in some cases. Traffic on the Helmholtz website has also multiplied; we’re seeing a lot of demand for reliable information, up-to-date reporting, opinion pieces, Q&A resources.

“We need to target people who are skeptical of science.”

Mr. Yogeshwar, you were saying how many scientists have no experience working with mass media. Now they’re suddenly in the spotlight. How well do you think they’ve risen to the challenge?

Ranga Yogeshwar: We’ve seen some fantastically talented people – I agree with Otmar Wiestler on that point. But I also remember how, time and again, opposing camps were said to have formed: virologist A says this, virologist B says that. This frequently became the focus of reporting, and the response from the scientific community was often inadequate.

Otmar Wiestler: Unfortunately, that is true. We haven’t always managed to make it sufficiently clear that science doesn’t have all the answers, and instead many things have to be weighed up and are very much open to dispute. For us, this exchange of arguments and positions is normal, but in the eyes of the public, it was quickly seen as a bitter quarrel. In the future, we need to do a better job of explaining to people how science actually works

Otmar D. Wiestler is President of the Helmholtz Association. The physician was previously the Director of the Institute of Neuropathology at the University Hospital of Bonn and Chairman of the Board of the German Cancer Research Center in Heidelberg.

Mr. Yogeshwar, when you talk to scientists about how to communicate their subject, how often do you use the example with the champagne bucket, the beer glass, and the highlighter pen?

Ranga Yogeshwar (laughing): I know what you’re referring to. Ten years ago, after the disaster at the Fukushima reactor, I was supposed to explain what had happened on a TV show. The only problem was that the colleague who was supposed to deliver the infographic didn’t get to the studio in time. So, I had to improvise and used a champagne bucket, a beer glass, and a highlighter to help put my explanation across in front of the cameras. My models were so basic that I was almost ashamed of myself from a scientific perspective. But the amazing thing was that the next day, a director from the TV station ARD called and said: “Mr. Yogeshwar, thank you for your explanation – now I finally understand!”

What conclusion do you draw from that experience?

Ranga Yogeshwar: We must always keep in mind the fact that the majority of people do not have any scientific expertise to draw on. I’m convinced that even now, after more than a year of coronavirus, a large proportion of people would still struggle if you asked them about the difference between viruses and bacteria. So, we have to keep going back to 1642 when it comes to science communication...

Ranga Yogeshwar: At that time, the French King Louis XIV was still a child, and the affairs of state were handled by a senior minister. Nevertheless, the Dauphin, as the young king was known, had to be kept up-to-date with what was happening in the country – child-friendly explanations were required. Incidentally, that’s where the term “ad usum Delphini” – for the use of the Dauphin – comes from. It’s precisely this “ad usum Delphini,” or highly simplified explanation, that we too often forget these days out of sheer enthusiasm for science.

Ranga Yogeshwar is Germany’s most best-known science journalist. A degree-educated physicist, he presented the science show Quarks on the German television network WDR from 1993. He works as a presenter and author. Several of his popular science books have been bestsellers.

Mr. Wiestler, do you still remember your first interview as a young research scientist?

Otmar Wiestler: As a young scientist, I was interviewed almost exclusively for scientific journals and university magazines. I first came into serious contact with science communication during my time in Bonn, when I worked with Oliver Brüstle on embryonic stem cell research. And the lessons I learned back then echo Ranga Yogeshwar’s observations.

What lessons were those?

Otmar Wiestler: I learned that we have to communicate what we do in a simple and readily understandable way to very different target groups – to politicians, the scientific community, and the general public. Each of these groups needs to be addressed via its own channels and in its own language. And finally, I also learned that close dialogue between scientists, science communicators, and politicians is required when it comes to really delicate topics – and stem cell research was one such topic that evoked very strong, even emotional, reactions.

If you combine these experiences with your interim assessment of the coronavirus crisis, what changes do you think are needed in the way science is communicated?

Otmar Wiestler: Researchers have a fundamental need to talk about their work, at least within the scientific community itself. But many of the topics are also of interest and importance to the wider public. This is where science journalists and science communicators come into play. They are skilled at discussing issues and asking questions, and they approach the topics with a lot of background knowledge and expertise in how to communicate them. As far as research is concerned, we need to consider how scientists can cultivate their communication skills early in their careers. It’s a matter of training opportunities and of recognition – I firmly believe that outstanding achievement in science communication is just as important as excellence in a particular field of research.

Ranga Yogeshwar: I think we need something more. We need to overturn our old, traditional perception of science communication – namely, that the scientist who appears on a talk show may be nice, but is also a bit dry. On television, scientists often have the thankless role of being a mere source of data, responsible for the facts.

“We have to communicate what we do simply and understandably to very different target groups.”

What do you have in mind instead?

Ranga Yogeshwar: I remember, for example, a talk show on which the virologist Melanie Brinkmann appeared as a guest. She shared her scientific expertise, but broke the ice right at the beginning when she talked about her two school-age sons. I think this style of communication, which is much more empathetic and grounded in everyday life, is very important.

Otmar Wiestler: Yes, and we must continuously improve science communication at institutional level, provide opportunities for scientists to build skills for successful communication, and embed this culture at our research institutions. This issue is now receiving a boost, not least from “Factory Wisskomm” – an initiative launched under the direction of Germany’s Federal Ministry of Education and Research.

“We need to overturn our old, classical notion of science communication.”

Feel free to be more specific: What is the Helmholtz Association planning with respect to communication?

Otmar Wiestler: We believe that sharing knowledge is one of our key tasks – in other words, to actively communicate about science. This has always been in the DNA of the Helmholtz Association. Nowadays, the task has become much more complex because the circumstances have changed. Social media have an enormous impact on the dissemination of information, but we need to work with them on a professional basis – and above all, be more responsive to the circulation of fake news. At the very least, this calls for close dialogue between research institutions. And then there’s another crucial point to be made...

Otmar Wiestler: We need to be much more active in communicating what we do to the public. In doing so, we have the fascination of science and its importance for society and every single person on our side – we need to take much greater advantage of this trump card. I’m thinking, for example, of the MOSAiC expedition – an incredible large-scale project in which researchers spent a year wintering in the central Arctic. The response to the expedition was incredible – it resonated with many people. At Helmholtz, we’re involved in many topics like MOSAiC.

The second part of the conversation between Otmar Wiestler and Ranga Yogeshwar focuses on the lessons learned from the pandemic – and what insights science communication has gained from it to help address the important topic of climate change.