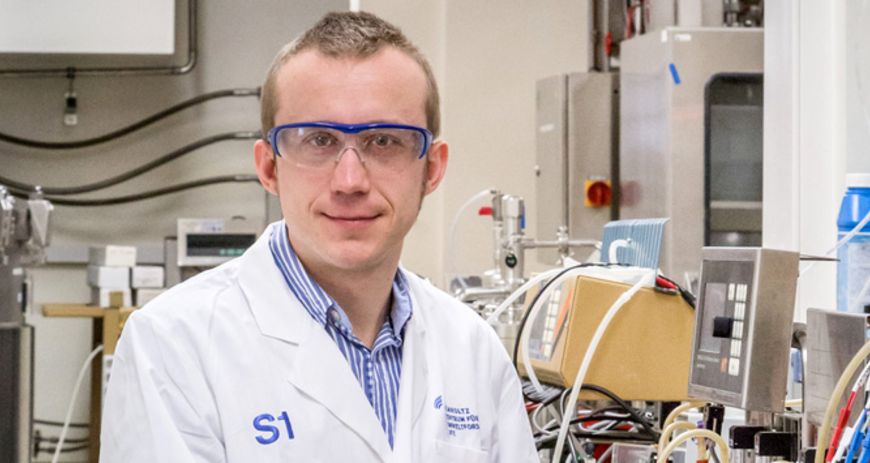 The Leipzig chemist Falk Harnisch caused a furore worldwide with his essay, about the US TV series Breaking Bad. But in his laboratory he conducts research on the fundamentals of natural laws - regarding microorganisms.

A man is standing in the desert; he is wearing only a shirt and white, fine-rib briefs. Smoke is rising from an old mobile home in the background. Two gasmasks are lying in the sand. The man is holding a pistol in his hand. Walter White, the protagonist in the US TV series "Breaking Bad", was once a high school chemistry teacher. But then he began to cook crystal meth. How a well-behaved citizen goes through the process of transforming into a ruthless criminal - this fascinates millions of television viewers worldwide. Nevertheless, it is the scientific aspect of the series that serves, likewise, as a hot topic of conservation. This has a lot to do with the article "The Chemistry of Breaking Bad", which has been downloaded from the internet by umpteen readers. The author is the German researcher Falk Harnisch. The 32-year-old chemist supervises a junior research group at the Helmholtz Centre for Environmental Research (UFZ) in Leipzig.

"The feedback from this article caught us completely off guard", says Harnisch. Together with his co-author Tunga Salthammer, he had frequently been bothered by the clichéd representation of scientists in films. They wanted to show by means of this article that it doesn't always have to be like that. "Walter White is certainly not a sympathetic figure, but he is an interesting and multi-faceted personality", says Harnisch. "And, most importantly, the series is full of interesting scientific details that are, to be sure, not always 100% correct, but they are never totally inaccurate either. How the drug crystal meth can be produced from cold medicine, how a battery can be built from dollar coins, screws and brake pads, and how a corpse can be dissolved in liquid acid - all of these things have a realistic background - and free the series' hero again and again from dicey situations. The article appeared in the magazine Chemie in unserer Zeit. "The Chemistry of Breaking Bad" has been the most downloaded article that the magazine ever published. In the meantime, it has been translated into English and published in the USA as well. Many newspapers and media have taken up the article.

All the hype connected with his analysis is a bit much for Falk Harnisch. Actually, he would much rather talk about his work at UFZ. For him, the activities in Leipzig after so many assignments abroad are more like a homecoming; Harnisch grew up in a small village in Saxony. When the Wall came down, he was seven years old - and still the German Democratic Republic with its industrial background greatly influenced his choice of study: "I was enthusiastic about chemistry right from the beginning. But it had a bad reputation in East Germany, characterised by the industrial complexes in Bitterfeld and Schwedt." Harnisch decided on the option that was more true to life and began a programme of study in biochemistry in Greifswald. After completing his PhD, he followed his doctoral supervisor to Braunschweig. As a postdoc he went to Australia for one -half year. Professionally, this was a good and inspiring time for him. "In Brisbane, I encountered experts from completely different fields. That expanded my technical horizons enormously", he says. The only downside of his residency in Australia: there was almost no time available for his favourite sport - jogging. "Twilight is very short there, so that it was either too hot or too dark for running."

For his life and work in Leipzig now, it is not only the general conditions for sports that best suit him. For Harnisch, the decisive thing for his move back to Saxony was the thematic breadth at the UFZ and the possibility to work together with experts from various fields. The financial setup also made the selection easy for him; in addition to the funding he was granted in the Helmholtz junior research group, Harnisch also received a coveted prize from the German Federal Ministry of Education and Research, with which his research on new biotechnological procedures is currently being supported. Falk Harnisch has assembled a young team around himself at the UFZ. When the workgroup meets for its weekly seminar, Harnisch, in his hooded sweatshirt, seems to be no older than his doctoral candidates. He is more likely to ask questions than to lecture. A positive and friendly atmosphere in his team, he explains, is just as important as the proper balance between work and leisure. "We are all enthusiastically involved, but I don't demand of my co-workers that they make work come first." He himself still has no children, but it is important to him that professional research is compatible with family life. "Nobody should have to renounce family for his career."

He is currently involved with electro-biotechnology in his laboratory research. In this area of research, the topic involves microorganisms that are able to send or receive electrons. Research scientists are discovering more and more bacteria in completely different habitats, to which it applies. "In basic biochemical processes such as respiration or fermentation, in the final analysis, it is a matter of transferring electrons from a higher to a lower levelof energy, to chemically bind this released energy, and to utilise it for life", he explains. With respiration, for example, the electrons are transferred to oxygen. Some bacteria have a different procedure in their metabolism in that they discharge the electrons out of the cell by means of carrier proteins.

Environmental microbiologists are especially interested in those bacteria that break down organic substances in waste water and release electrons in the process. This is a tantalising prospect; as early as the 50's, NASA wanted to obtain electricity in their space shuttles from the astronauts' excretions. Harnisch is attempting to provide electroactive bacteria with electricity, thus[SG1] stimulating their metabolism in the process. By means of this procedure, he aspires to produce valuable raw materials for the chemical industry. Thus far, they come from petroleum at a level of 90%. However, the ideal source material for the bacteria is CO2, which is abundantly available, but also damages the climate. Utilisation thereof has to date only been achieved to a small degree by researchers. It is Harnisch's goal to develop these procedures to commercial viability. "The problem is that industry is only prepared to get on board if the reactors are bigger", he explains.

The field of electro-biotechnology, in which Falk Harnisch is involved, has been experiencing a veritable boom during the last decade - even the number of international conferences has increased. A colleague approached Harnisch at one of these conferences. In his hometown, he said, almost everybody knows his name: "You are famous in Albuquerque", he proclaimed. Albuquerque, in the US state of New Mexico is the setting for the series - as all fans of Breaking Bad know - and Walter White's hometown.