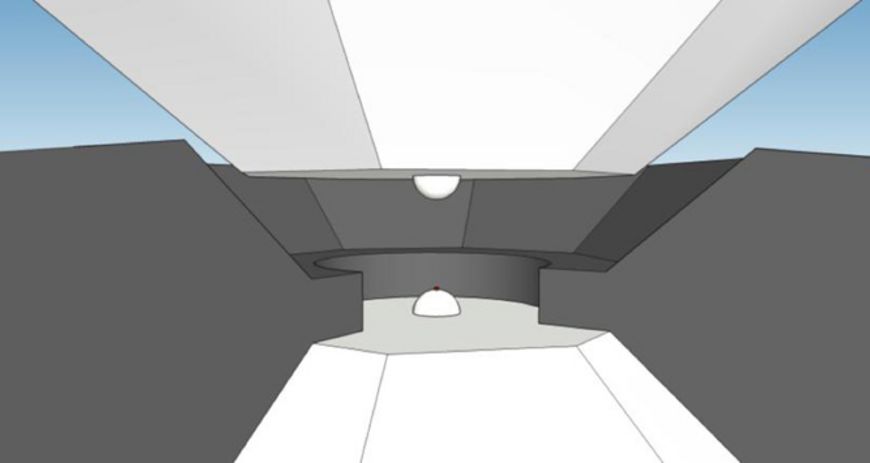 <b>Schematic drawing of the anvil cell</b> The osmium probe (red dot) measures only three micrometres and is positioned between two semi-spheres made of nanocrystalline diamond. Image: Elena Bykova/Universität Bayreuth

Osmium is one tough customer. Instead of crumbling or caving in, the metal stayed intact when scientists at the University of Bayreuth and the Deutsches Elektronen-Synchrotron DESY applied pressure to it. And this occurred even though they were producing the highest degree of pressure that had ever been achieved in a laboratory.

Even the weight of twenty jumbo jets – crammed full to the limit and balanced on one square centimetre – was not enough to affect the osmium crystals in the least. This corresponds to the pressure that was applied to the metal by the scientists, who used a so-called ‘diamond anvil cell’: They were able to achieve up to 770 gigapascals. Even the pressure at the Earth’s core is not half as high. In order to investigate precisely what happens to the metallic osmium under such extreme conditions, the research scientists used X-ray radiation from DESY’s research light-source PETRA III in Hamburg, as well as two further X-ray sources in France and the USA.

Through this experiment, the scientists first showed how stable osmium crystals are. Second, they surpassed their own performance level by 130 gigapascals – three additional jumbo jets – which set a new world record for pressure.

”High pressure usually radically changes the characteristics of many materials: Metals such as sodium (natrium) are converted into transparent isolators, and gases such as oxygen become solid and electrically conductive,” explains Dubrovinskaia from the University of Bayreuth. Osmium, on the other hand, hardly changed at all: Its crystal structure remained intact, though the pressure stimulated the inner electrons to interaction.

The experiment thus provided fundamental new insights into the physics and chemistry of extremely compressed matter. The results could be of significance in the production of innovative materials. Already today, the hard metal is chiefly being used for highly stressed machine components.