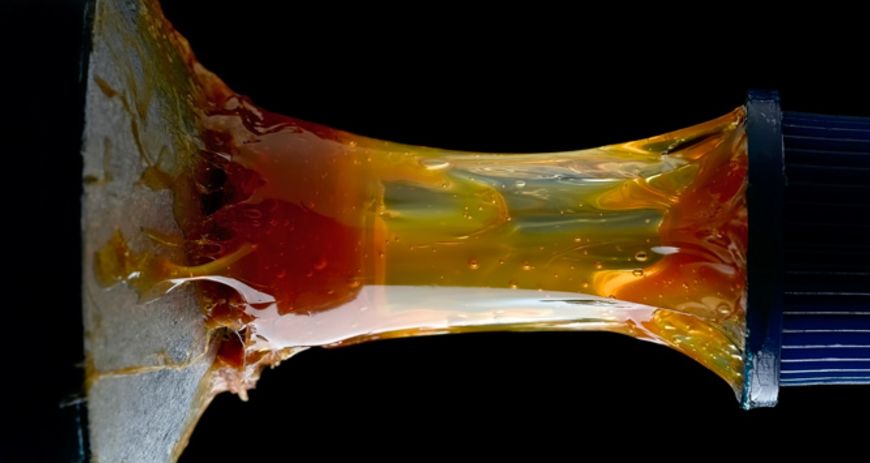 Not even the strongest glue can keep up with the adhesive strength of gluons. Photo: milosluz/istockphoto.com

No amount of force will do to unstick the ultimate super glue. Quarks, the building blocks of protons, occur in pairs or in groups of three and are inseparably connected to their partnering quark(s). The adhesive forever joining them is called a gluon, its name being appropriately derived from the English word to glue

If a proton is smashed to pieces, its individual components will rather reorganise than allowing the link between the two quarks to be broken. This gluonic bond is therefore the strongest force known to mankind. It contributes to preventing the nucleus from falling apart.

The first experimental observation of gluons took place in 1979 at the Deutsches Elektronen-Synchrotron DESY, a Helmholtz member centre. Back then, the researchers were able for the first time to measure physical effects indicating the existence of such a super glue. As of recently, it has become possible to conduct detailed investigation of gluons on the basis of heavy quark-antiquark pairs and quark-gluon plasmas. The generation of these is possible at the worldwide largest particle accelerator at CERN in Geneva and at the future FAIR facility in Darmstadt, Germany, amongst other locations. This kind of basic research even yields directly usable results, which is a source of particular pride for Klaus Peters. He is head of the department Hadron Physics at the GSI Helmholtz Centre for Heavy Ion Research in Darmstadt, where his research focuses on the quark-gluon plasma. For instance, his colleagues have developed an innovative form of ion radiation treatment for cancer therapy. And last but not least, society as a whole profits from this kind of particle research: the world wide web emerged as a permanent structure because scientists at CERN wanted to connect and communicate with their colleagues across the globe.