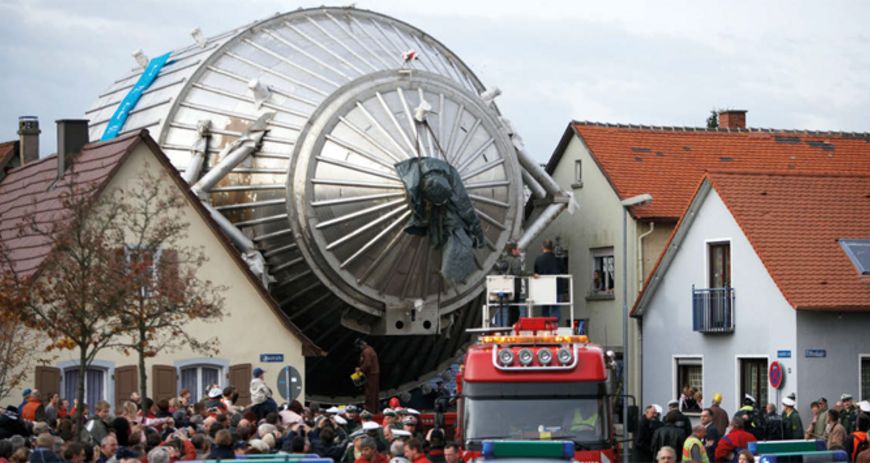 <b> Unusual move </b> The main spectrometer of KATRIN with a length of 24 meters and a diameter of 10 meters on the way to the northern campus of the KIT. Photo: KIT

The most-sensitive scale in the world

In order to measure small things, sometimes huge instruments are required. In certain cases, in fact – the smaller the objects to be analysed, the larger the measuring devices. In this manner research scientists determine, for example, the mass of atoms in laboratories with special mass-spectrometers. But what happens if the objects are even smaller?

If the particles that one is trying to weigh are flying around through space as ghostly particles - virtually without mass? The highly elusive particles that the research scientists are interested in are called neutrinos. It has only recently been discovered that they have any mass at all. This amounts to, presumably, considerably less than one-millionth of the mass of an electron. In order to make a precise determination, an international team from the Karlsruhe Institute of Technology is developing the most sensitive scale in the world - KATRIN. With the aid of the radioactive decay of the gas tritium, i.e. its beta decay, researchers want to determine the mass of the neutrinos. For this purpose, they are building a 70 metre-long facility. It consists of a tritium source, a multi-stage pump segment, a pre-spectrometer, a 200-tonne electrostatic main-spectrometer and a detector. The main-spectrometer alone makes even an apartment house look small, which was made evident during its 2006 transport through the Karlsruhe city centre. The challenges of KATRIN's components frequently test the limits of physical possibilities; for example, the cooling system for the gaseous tritium source has to operate at a temperature with only a few thousandths of a degree tolerance. But the effort pays off in the end; precise measurement of the neutrino mass is highly significant in that it provides a small step towards unravelling the puzzle of how the universe is constructed. The first measurements using KATRIN should start in 2016.