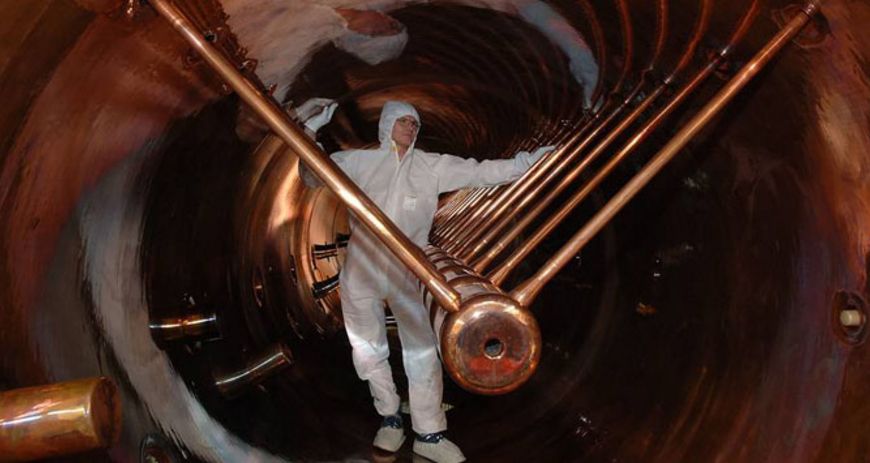 “Super-heavy elements” exist for mere milliseconds before they decay. Researchers at the GSI Helmholtzzentrum für Schwerionenforschung are going to incredible lengths to create them. How are these elements produced and why are scientists looking for them?

The nucleus of an atom contains positively charged protons and electrically neutral neutrons, all in extremely close proximity. What puzzled physicists for a long time was how a nucleus stayed together, given that like-charged things repel each other. The solution came with the discovery of strong interaction, which is the force that keeps a nucleus stable. Even so, if a nucleus has too many protons repelling each other, it becomes unstable and decays. The maximum number of protons a nucleus can have and still remain stable is 82, which is the atomic number of lead. The atomic number indicates how many protons are contained in the nucleus of an element. All elements with more than 82 protons are unstable. Protons and neutrons also have mass, so the higher an element's atomic number, the heavier it is. Elements with an atomic number greater than 104 are known as "super-heavy elements".

Researchers working in this field are trying to create heavy, unstable elements so that they can learn more about the binding within a nucleus. To do so, they make stable atoms collide with each other at high speeds. This process is capable of creating never-before-seen elements that exist for a very short time. Working at GSI in Darmstadt, a group led by Dirk Rudolph of Lund University, Sweden, bombarded a thin film of americium (95 protons) with calcium ions (20 protons). Their results showed traces of both the decay of an element with the atomic number 115 and the decay of its daughters - including element 113. These elements must have existed for just a few milliseconds. The findings back up reports by the Joint Institute for Nuclear Research in Dubna, Russia, which also say that elements 113 and 115 exist.

The discovery also allows scientists to put assumptions about theoretical nuclear physics to the test. Furthermore, the results of the experiments can help researchers to make progress in their hunt for the as-yet undiscovered "island of stability". As mentioned above, the more protons an atom has in its nucleus, the more unstable it usually becomes. But the island theory states that there could be a group of especially heavy nuclei that are actually quite stable - that is, a constellation of protons and neutrons that does not cause the element to decay immediately. These kinds of elements might be able to exist for minutes or even for much longer. If that turns out to be the case, it could even be possible to put them to practical use.