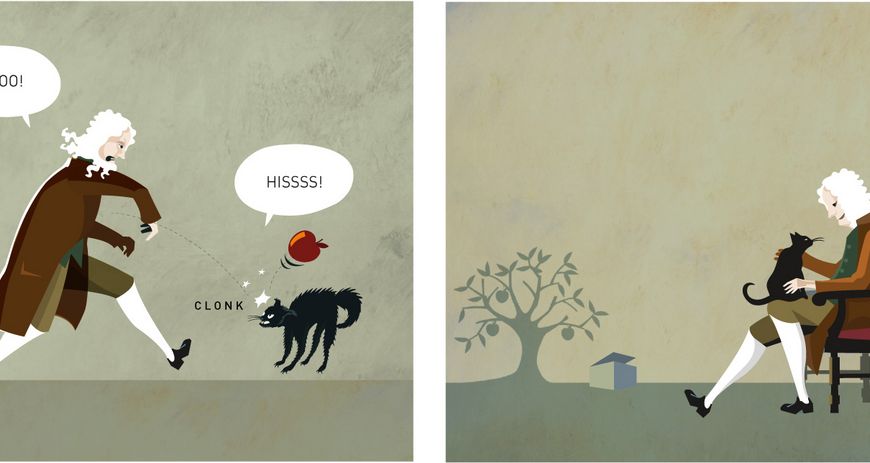 Newton's classical physics and Schrödinger's cat as a model of quantum physics. The jury commended the Nobel Laureates for integrating into their models "the best of both worlds". Image: Johan Jarnestad/The Royal Swedish Academy of Science

Only ten years ago, computer simulation of a chemical reaction or of the structure of useful materials was impossible. Today, researchers can compute the three-dimensional structure of, for example, biomolecules causing diseases, thus assisting the search for an appropriate active agent

The process of computer simulation as such is not revolutionary. Production processes have been simulated on the computer for a long time, for instance, prior to constructing a car. What is new, however, is the field of application. After many years of research, molecular processes that remain invisible to the human eye can now be simulated. For this achievement, Martin Karplus from Harvard University and Université de Strasbourg, Michael Levitt from Stanford University and Arieh Warshel from University of Southern California received this year's Nobel Prize in Chemistry. They have created the basis for computer simulations of chemical processes at a molecular level. Experts say that the prize for this topic was long since overdue, for the work of the three US-Americans has been influencing many other fields for decades.

Simulations are of great value especially for materials sciences and life sciences. Only ten years ago, computer simulation of a chemical reaction or of the structure of useful materials was impossible. Today, researchers can compute the three-dimensional structure of, for example, biomolecules causing diseases, thus assisting the search for an appropriate active agent. It now is possible to record highly complex processes and materials on a molecular basis, to transfer these to virtual space and to watch molecules at work. For medicine in particular it is interesting to understand complex processes within cells on the basis of detailed molecular simulations.

"The three researchers have been pursuing the vision to illustrate chemical processes as realistically as possible through simulation for a long time", says Wolfgang Wenzel, who works at the Institute of Nanotechnology belonging to the Karlsruhe Institute of Technology and who is an expert in the field. The emergence of modern computer technology has slowly made this vision come true: According to Wenzel, it is owing to Karplus, Levitt and Warshel that the idea of computer simulation has become firmly established in the life and natural sciences. "They have significantly contributed to rendering simulation results credible", says Wenzel. Yet the researchers did not jointly work on their vision. Only consolidation of their respective work resulted in the breakthrough. With their research, Martin Karplus, Michael Levitt and Arieh Warshel have established a new scientific field: they combine theory and practice in virtual space - realistically and in real time. A worthy Nobel Prize in Chemistry 2013.

Martin Karplus was born in 1930 in Vienna. With his research, the theoretical chemist has significantly contributed to the field of physical chemistry. He is noted for his contributions to quantum mechanics, nuclear magnetic resonance spectroscopy and molecular dynamics simulations. He works at the Université de Strasbourg in France and at Harvard University, Cambridge, MA, USA.

Michael Levitt was born in 1947 in South Africa. He has worked on computer simulation of the movement of proteins in solution and of protein folding. He has significantly contributed to genome sequence analysis, which decodes information about the proteins encoded within the genetic material. He has worked together with Arieh Warshel, amongst others. Levitt works at the Stanford University School of Medicine in Southern California, USA.

Arieh Warshel was born in 1940 in Israel. In the field of computer simulation, he has developed procedures and programmes specialising in particular in protein functions. In the 1970s, he worked together with his fellow Nobel Laureate Michael Levitt. Warshel works at the University of Southern California, Los Angeles, USA.