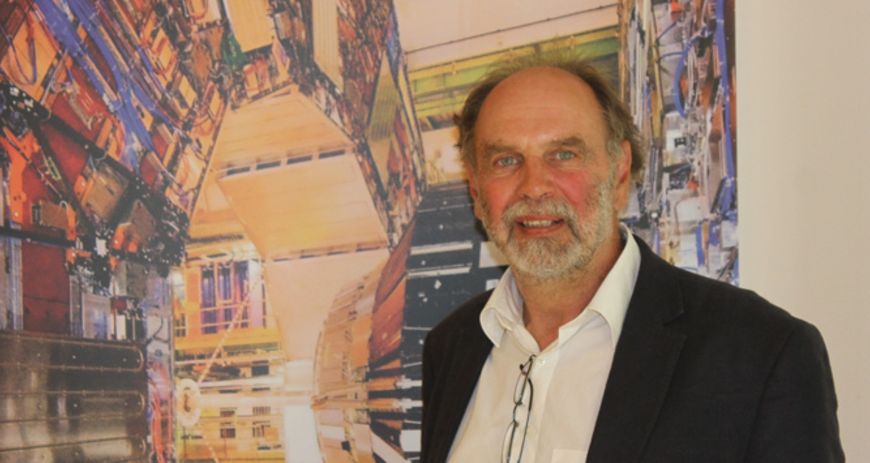 No Computing, no Science

As Head of IT at the Deutsches Elektronen-Synchrotron DESY, Volker Gülzow is master of almost infinite amounts of data. Without him and his colleagues, modern science would be nothing

Only a few days ago, Volker Gülzow returned from a sailing trip. He had travelled on his boat for nearly two weeks: from Hamburg up to the Danish islands and back home. "After months spent on research applications, this was a marvellous holiday with lots of sun, peace and relaxation", the mathematician enthuses, looking forward to the next big summer holiday. Yet in the coming months there will be time at most for a short weekend trip.

Volker Gülzow's element is the sea - both in his free time and professionally. He is Head of IT at DESY, the Deutsches Elektronen Synchrotron, and as such he has to deal with seas of data. For instance, there are the vast amounts of data generated by the DESY's own accelerator facility PETRA III. It produces exceptionally brilliant X-rays that enable researchers to identify the tiniest details in molecules and materials. Then there are the huge data packages received from Switzerland. They derive from the Large Hadron Collider at CERN in Geneva, where, two years ago, a long sought after elementary particle called the Higgs boson was found. When its fathers, who had predicted the particle's existence as early as half a century ago, received the Nobel Prize in Physics in the autumn of last year, the rejoicing in Hamburg knew no ends: "The DESY had its share in the discovery", says 58-year old Gülzow.

The research centre provides the international scientific community with large-scale facilities for basic research in physics as well as carrying out its own projects. In addition to particle physics, its research involving photons, that is, light particles is equally world-famous. Some two thousand people work at the two DESY sites in Hamburg and in Zeuthen near Berlin. Nearly a hundred are employed in Gülzow's IT department. When the scientific community achieves a major discovery such as the Higgs boson, his team is likely to have contributed.

Their task is to collect the measurement results pouring in around the clock and to save them in such a way so that researching physicists, biologists, chemists and engineers can use them. To make this possible, data streams of often several petabyte - a number with 15 zeroes - have to be optimally managed. Gülzow's team works on solutions for analysis and storage of large amounts of data. This includes, for example, the D-Cache software, which was developed in cooperation with Scandinavians and US-Americans under supervision of DESY. Today, it supports big data management worldwide. Programmes such as D-Cache will play an important role also in the DESY's next large-scale project: the European X-ray free electron laser XFEL, a unique research facility that is currently being constructed in Hamburg and that is scheduled to be commissioned in 2016.

"I consider it a gift to be able to work here, together with very intelligent people from different cultures", says Volker Gülzow. His view is not changed by the ten and more hour long working days, the many meetings and frequent business trips. Gülzow has been working at the DESY since 2001, always in the same position, but, due to the third-party funding he raised, with an increasing number of staff.

Born in Rendsburg, he has spent the greater part of his professional life in research institutions of the Helmholtz Association: as a student assistant when reading maths and physics in Göttingen, then as a research associate at the German Aerospace Center, and subsequently as a head of department at the German Climate Computing Center in Hamburg. Gülzow: "I have always worked in science, in the occasionally underestimated second rank."

The first rank is occupied by researchers conducting experiments. However, they would not get very far without the highly qualified scientific computing of someone like Volker Gülzow and his team. No computing, no science: that is the now unchallenged motto, says the science manager, who is also the Chairman of the Data Processing Coordination Committee of the Helmholtz Association. Even so, he says, the funding for the expensive scientific data centres is far from doing justice to their importance.

In general, there is a lack of appreciation for their performance - a shortcoming that also makes it difficult to recruit young talent. "Good physicists rather choose a career in industry or the first rank of science", says Gülzow. One of his ideas to render his field more attractive for young people is joint appointments together with the universities. Although he sometimes is a little at odds with his profession, given the choice a second time, he would again do the same, says Volker Gülzow. His parents - the father a physician, the mother a pharmacist - had wanted their youngest son to become a medical man. Yet he aspired after the "beautiful world of logic", the mathematician reminisces and immediately adds: "The medical bit was done by my older brother."

A father of three, he himself lets his children freely choose their professions. None of them have followed in his footsteps. By now, Volker Gülzow and his wife, a teacher of German, already are grandparents twice over. They all are drawn to the sea - and one in particular.