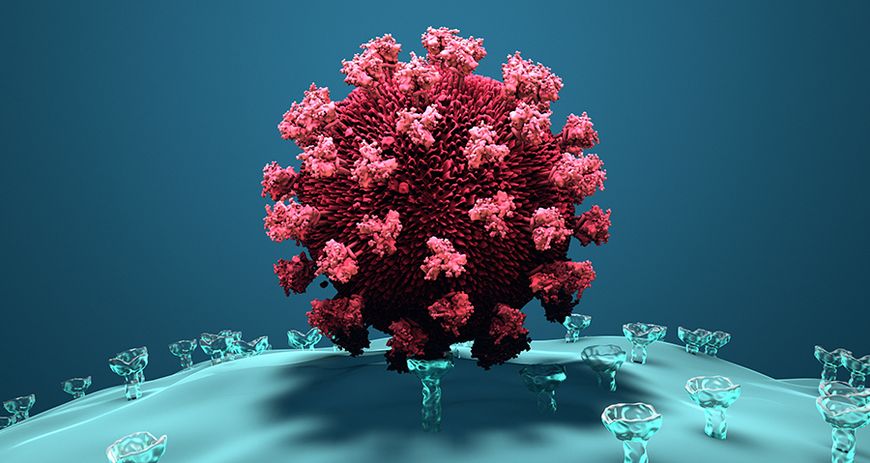 How the virus uses proteins of the cell

How do somatic cells and their proteins interact with SARS-CoV-2 when they are infected by the virus? Young scientists have now published the world's first publication on this subject. Mathias Munschauer, one of the lead authors, explains how this could lead to new treatment approaches.

Mr. Munschauer, you have chosen an unusual approach to better understand the coronavirus and its mechanisms of action. You do not focus on the virus and its proteins, but on the host cell, i.e. the cell that is infected by the virus. What have you learned about the virus from this?

We looked for mechanisms in the cells that are either protective or make the cell more susceptible to attack by the virus. SARS-CoV-2 is, after all, an RNA virus. The RNA genetic material of the virus is introduced into the cell and then translated by the cell into proteins that the virus needs to replicate. We have made the interesting discovery that SARS-CoV-2 relies on certain proteins for which the virus itself, however, does not carry any genetic information.

So it also uses proteins from the host cells?

Exactly, it uses the proteome of human cells. The proteome is the total number of proteins found in human cells. In a sense, the virus relies on finding certain proteins that belong to the host cell's proteome in an infected cell.

So if these proteins were not present in the cell, the replication of the virus would be blocked?

Yes, that is a possible mechanism. However, the proteins are usually present. But there are also proteins in the body cell that can interact with the viral RNA and thus inhibit the replication of the virus. Using mass spectrometry, we were able to identify these RNA-binding proteins. In our work, we created a kind of catalog of them: up to 104 human proteins interact directly with the RNA of the virus. At least 18 of them seem to be particularly important in SARS-CoV-2 infection. We took a closer look at two of them in particular, which inhibit viral replication by binding to the viral RNA. In other words, they have an antiviral effect.

In addition, we also tested so-called small-molecule agents. Because of their very small size, they are able to penetrate cells and inhibit proteins that have a stimulating effect on the virus and its replication rather than an inhibitory one. This would be another possible target to slow down the viruses in their multiplication.

Mathias Munschauer studied biotechnology and subsequently obtained his doctorate in biochemistry. He has won numerous research grants, including the Springer Prize for outstanding doctoral theses. Since 2019, he has been a Helmholtz Young Investigator Group Leader at the Helmholtz Institute for RNA-based Infection Research (HIRI) in Würzburg. HIRI is a site of the Helmholtz Centre for Infection Research (HZI).

So these mechanisms can also be used therapeutically?

Certainly, this results in approaches that should be pursued further. For those cells that produce the two aforementioned antiviral proteins in rather larger quantities may be better protected against SARS-CoV-2. For example, finding ways to stimulate the production or activity of these proteins in somatic cells could make these cells more resistant to coronavirus. Alternatively, small-molecule agents can be used to try to inhibit certain host cell proteins that are conducive to the virus or its replication. But of course, more research, including clinical trials, is needed. I hope that our findings will be taken up and continued by some colleagues.

They recently published the results in the renowned journal Nature Microbiology. The study got a lot of attention when it was published.

We were very happy when we published the results. Even though most of the research in this field is more focused on the virus and its proteins, there are a few research groups that are looking at the effect of the host cell proteome on SARS-CoV-2, especially the RNA, just like we are - our study is the first in the world to be published on this. For us as a group of quite young scientists, this was a very big success. Of course, that also gives a huge boost of motivation.

"Up to 104 human proteins interact directly with coronavirus RNA."

You head a junior research group at the Helmholtz Institute for RNA-based Infection Research (HIRI) in Würzburg. How is that structured?

The Helmholtz Association issues a call once a year for so-called "Helmholtz Young Investigator Groups". Any successful younger scientist can apply there. If the application is successful, you become a Young Investigator Group leader and receive research equipment and a budget. This allows them to hire doctoral students and other scientists, among other things, and thus pursue their own research questions. Of course, there are also regular meetings and seminars among the junior research group leaders, because even if the research fields are sometimes far apart, there are common themes.

Back to the publication. That was probably also a joint project?

Yes, absolutely. My junior research group was in charge of the publication in Nature Microbiology, but of course it was a major joint effort. A total of six research groups were involved. In particular, Jochen Bodem and his team from the Institute of Virology and Immunobiology at the University of Würzburg and colleagues from MIT in Boston played a major role in the publication.

You coordinated the whole thing?

Yes, my junior research group was where the threads came together. I had to steer the process and make sure that any problems that arose were dealt with quickly. Most of the findings related to COVID-19 are currently attracting a lot of interest in the scientific community. At the same time, this is precisely why we are under time pressure. So it was good that I had a lot of freedom and flexibility as a junior research group leader. Since I do little teaching, I can concentrate fully on research. In addition, I can use the available budget freely.