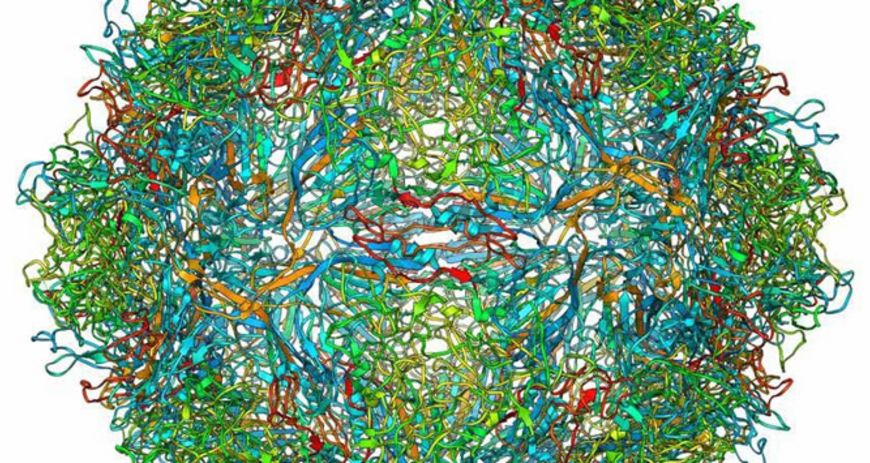 <b>Cancer-eating cluste</b>r A three-dimensional model of the external envelope of a parvovirus, which surrounds the genetic material of the virus. Photo: LAGUNA DESIGN/SPL

Why are certain viruses attracted to cancer cells?

Parvoviruses are able to attack and kill cancer cells without causing disease in human beings. DKFZ researcher Jürg Nüesch explains how the viruses take on the cancer cells.

Parvoviruses are able to attack and kill cancer cells without causing disease in human beings; this important information is being used by scientists at the German Cancer Research Centre (DKFZ) in Heidelberg. Since 1992, they have been developing a virus therapy to fight dangerous and barely treatable brain tumours. In 2013 a clinical study demonstrated for the first time how safe the parvovirus therapy is. Here, DKFZ researcher Jürg Nüesch explains how the viruses take on the cancer cells:

“There are several mechanisms that help cancer cells to multiply quickly – for example, signal chains that counteract programmed cell death, or signals that allow the cell to separate from the original tissue and resettle in a different location. It is these same mechanisms, however, that also help the parvovirus to mature quickly. Once the viruses have sufficiently multiplied, they cause their host cells to burst – thus allowing them to immediately attack new cancer cells. Following the viral attack, the immune system becomes aware of the cancer cells and helps to destroy them. This is particularly useful in the fi ght against brain tumours, since operations on the brain are difficult.

Parvoviruses originally stem from rats and cannot replicate in human cells that do not divide. But cancer cells divide frequently – and thus the virus inside them matures as well. We are currently working on a study involving 20 patients with a certain kind of brain tumour called glioblastoma. We are steadily increasing the dosage of the viruses. We have already observed that the viruses are able to find the brain tumours even after being injected into a vein in the arm. Thus far we have seen no side effects, even though we have reached the second-highest dosage level. In a larger subsequent study, we would now like to examine whether the viruses also help to prolong patients’ survival.”