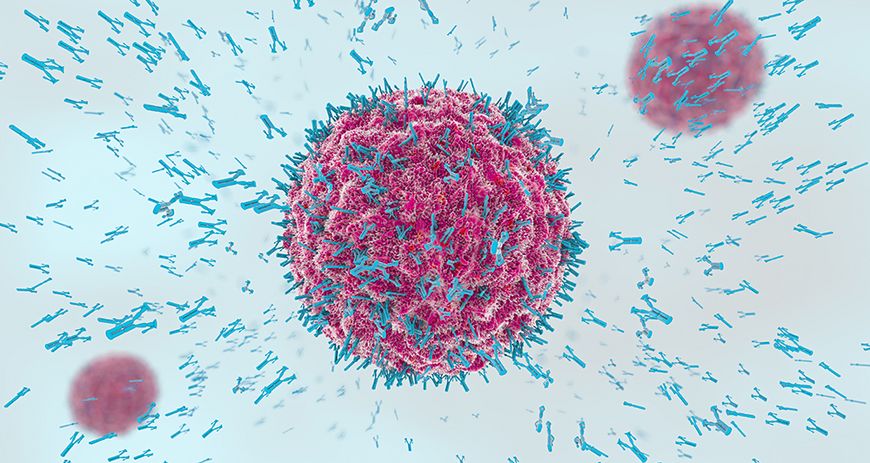 What role do antibodies play in the treatment?

Antibodies could become an important weapon in the fight against SARS-CoV-2 infection. However, no therapy has yet been officially approved.

The development of vaccines and medications against the coronavirus has been employing countless scientific experts in clinics, laboratories and companies worldwide for months. While a vaccination stimulates the immune system to produce memory cells and antibodies against the virus, there is also the possibility of administering antibodies to patients that have either been generated in the test tube or isolated from the blood of other patients. The foreign antibodies also fulfil their function and help the immune system to eliminate the virus. They act immediately, but only for a limited period of time. Neutralizing antibodies used in this process have been known since the mid-1970s, and in 1984 the research was awarded the Nobel Prize for Medicine. In the meantime, the expensive so-called biologicals are used against many diseases.

Researchers around the world are working to isolate or produce antibodies against SARS-CoV-2. But so far they are only used experimentally to treat patients. A prominent example is Donald Trump. After his infection, the U.S. President received an antibody cocktail from the biotechnology company Regeneron. The day after, he raved about how "great" he felt - and promised all Americans free distribution of the passive vaccine REGN-COV2. Of course, it is impossible to say what role the antibodies played in his recovery. Studies investigating this form of therapy with scientific methods are still ongoing. Intermediate results suggest that the antibodies do not cause a rapid recovery in patients with advanced disease. Regeneron adjusted the ongoing studies based on these interim results and is now mainly testing the effect in an early phase of the disease.

Advantages and disadvantages of passive vaccination

A passive vaccination is for several reasons no replacement for the self-established immune protection. "Since the antibodies in the body are gradually broken down, immunity only exists for about four to twelve weeks," explains Harald Prüß, research group leader at the German Center for Neurodegenerative Diseases (DZNE) and senior physician at the Clinic for Neurology with Experimental Neurology at the Charité. After an active immunization, the human organism remains immune for a lifetime in the best case. The passive vaccine is also significantly more expensive to produce.

On the other hand, a passive vaccination has some advantages: While an active vaccination is intended to protect as many healthy people as possible from infection with SARS-CoV-2, a fast-acting passive vaccination is particularly helpful in the treatment of high-risk patients who are suspected to have become newly infected after contact with infected persons. It is also suitable for immunocompromised patients with cancer or autoimmune diseases, for example. "It would be ideal if both vaccinations were available. Then we would be able to react flexibly to any situation," says Harald Prüß.

Researchers lay the foundation for a passive vaccination

Together with his team from DZNE and Charité - Universitätsmedizin Berlin, the senior physician recently published promising results for a passive vaccination. The researchers initially isolated almost 600 different antibodies from the blood of people who had survived a COVID-19 disease. By means of laboratory tests, they were able to limit this number to a few highly effective specimens and then artificially reproduce them using cell cultures - virtually in a Petri dish, as it were. "Three of the 600 antibodies identified are particularly promising for clinical development," says Prüß. "Using structural analyses, we have shown that these antibodies bind to the virus and thus prevent it from entering cells and multiplying. The antibodies neutralize the virus very effectively and the immune system eliminates the pathogens. Studies on hamsters - which are susceptible to infection with SARS-CoV-2 in a similar way to humans - have shown the high effectiveness of the selected antibodies.

According to the neurologist, the chance of a safe vaccination without side effects is very high. "This is because we did not obtain the antibodies from plasma from infected donors, but from antibody-producing B immune cells that float in the blood," explains Prüß. By reading their genetic blueprint, they were then able to genetically reconstruct these antibodies in the laboratory. "In this way, tailor-made antibodies can be produced on an industrial scale in consistently high quality and theoretically in any quantity, and the body does not reject the identical, human antibodies as foreign," the senior physician knows. In the next step, the industrial partner Miltenyi Biotec is working on effectively producing the antibodies in large quantities in accordance with the strict approval criteria. "We expect the first production cell lines before the end of this year," says Prüß. "We are expecting to have an active substance tested in phase I and II studies next spring".

Possible side effects of antibody therapy

During their investigations, however, the scientists made another discovery: "Some antibodies still bind to other structures in the body, such as the brain, heart muscle and blood vessels," says Prüß. Evidence is still pending that this so-called cross-reactivity is harmful and can trigger chronic inflammation, for example. but the observation fits the picture that COVID-19 presents. If an infection is severe, in the end the overreacting immune system is the problem and no longer the virus itself. The researchers therefore continue to study the cross-reactive antibodies intensively. These antibodies were excluded from the development of a passive vaccination.

"If our suspicions are confirmed, this would be both spectacular and fatal," says Prüß. On the one hand, this would explain why many COVID-19 patients have hitherto unexplained neurological consequences such as facial twitches, exhaustion, concentration disorders or epileptic seizures. "On the other hand, it would also mean that active vaccines could also pose this potential danger. Of course, this would have to be taken into account in the vaccine development process. In this respect, our findings could contribute to making vaccines even safer".

COVID-19: Berlin researchers lay the foundation for a passive vaccination