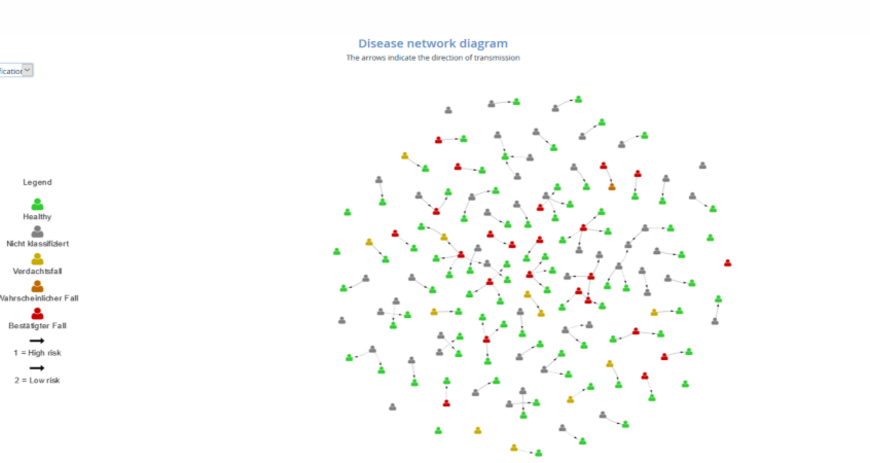 Management of the COVID 19 pandemic

The tracing of infection chains is in the hands of the public health departments. Impressions from the Berlin district of Steglitz-Zehlendorf show how the use of the SORMAS program can help. The authority has been working with SORMAS since the spring. By the end of the year, 90 percent of the offices nationwide should be using the program - but so far, only 95 are.

Carolina Böhm is relieved. The district councilor for health in Steglitz-Zehlendorf is responsible for one of the 400 or so health offices that exist in Germany. A lot depends on the work done by the authorities in dealing with the pandemic. After all, the management of infections and of people who may have become infected is the responsibility of the offices. Carolina Böhm is pleased because for this important task, a reliable program has been available to her staff since May to help them with the difficult work of tracking so-called corona contacts. 50 infections per 100,000 residents within a week is the upper limit regulated by federal and state governments before the county must resort to regulatory containment measures.

"So far, we've entered every infected person who lives in our district into an Excel spreadsheet - and also anyone they might have infected because of closer contact," Carolina Böhm explains. For each infected person, this can quickly add up to 20 or many more people who have to be recorded and regularly consulted. Every day, the employees of the health authorities call the contacts to find out whether they are showing symptoms. The problem with this is that all employees work in a file. This file is either locked because it can only be opened by one user, or it is simply overfilled. More than 500 cases and all contacts in one table? "In Mitte, the Berlin district most affected, the servers crashed and data was in danger of being lost," reports Cerstin Richter-Kotowski, district mayor of Steglitz-Zehlendorf. For this reason, Mitte was the first district to use the SORMAS contact person management program, and all other Berlin health offices followed suit - including the office in Steglitz-Zehlendorf.

SORMAS stands for Surveillance Outbreak Response Management and Analysis System and was developed in 2014 by the Helmholtz Centre for Infection Research (HZI) to network all relevant data and participants in an epidemic - case numbers, contacts and symptoms, for example, but also laboratory staff, doctors and epidemiologists. The system is used in Germany as a web version, but also works as an app on cell phones or tablets. It is particularly suitable for use in regions with weak infrastructure. As an effective contact tracing tool, it has already proven its worth, especially in African countries, during outbreaks of many diseases from Ebola to measles to Lassa fever. Now the tool has been expanded to include a COVID-19 module and adapted specifically for the German public health service - a noticeable relief for public health departments. "It's not just a matter of maintaining contact data, but also of linking action-relevant information to it," explains Richter-Kotowski. Is the contact person showing symptoms? Is she in quarantine? Has a test been performed? What are the results? And, again, what contacts did the person have when they may have already been sick? "In the best case, the information reaches us already when a suspected case exists," says the district mayor. "It's an immense administrative burden for which we've had to increase staff." In the meantime, 22 employees in Steglitz-Zehlendorf take care of the coordination of cases and contact persons.

The control of this query and the documentation is now taken over by SORMAS. The program guides the users - the employees of the health offices - case-specifically and in clear steps. "Besides the structuring of the processes and data processing, the task-specific user guidance is the greatest advantage of the system," says Carolina Böhm. Within a very short time and even before the World Health Organization declared COVID-19 a pandemic, the experts around Gerard Krause from the HZI had modified the open-source program so that it was suitable for monitoring infection events. A short time later, the module for public health departments SORMAS-ÖGD was developed. It includes process models for all areas of the disease - from control of the case itself to contact person management. According to preconfigured schemes, the individual steps are listed and formulated as tasks for the employees of the public health departments. For example, the basic state of health, respiratory symptoms or laboratory results are recorded.

The program is not a tracking app that uses geocoordinates or data from cell phones to collect and pass on information about patients' behavior and contacts. As in the previous process with the Excel spreadsheet, the data is managed centrally in the respective health office, used only there and hosted on an individual server - with special attention to data protection. The health offices are the sole owners of all entered and generated data, to which only authorized persons of the respective office have access. Epidemiologically important figures and information are passed on anonymously, and interfaces are created for this purpose - for example, to SurvNet@RKI, the program developed by the Robert Koch Institute (RKI) for recording, evaluating and forwarding reporting data. In order to be able to track contacts who go beyond the district boundaries, a central server is to be created. This will allow the SORMAS applications of the individual health offices to exchange data. "This was also necessary before, since most people move within a larger radius," explains Carolina Böhm. "It was just very complicated to enter that into Excel spreadsheets and coordinate it by phone between the different offices."

In principle, the tool offers many more possibilities for integration and communication with laboratories, hospitals, state health authorities and the RKI. For example, the HZI is currently working on a symptom diary app that will be docked onto SORMAS. This could be installed on mobile devices or PCs of the sick person, suspected person or contact and facilitate independent documentation. The data that would otherwise be requested by the office would then be entered by the person concerned. Instead of a single solution, it would also be possible to have a central solution that coordinates all offices, which would make coordination and networking much easier. In principle, networking of the health offices is conceivable and also legally feasible with the renewal of the Infection Protection Act (IfSG).

However, of nearly 400 health offices nationwide, only 95 offices are using SORMAS as a local version. Only in a few federal states, such as Berlin, is the program being used across the board. In Bavaria, the use of SORMAS will be mandatory for all health offices with immediate effect. In order to ensure complete tracking of infection chains, the federal government has now decided that 90 percent of health offices should be working with SORMAS by the end of the year.

Message from the Steglitz-Zehlendorf district office

The process: from contact person to suspicion to case