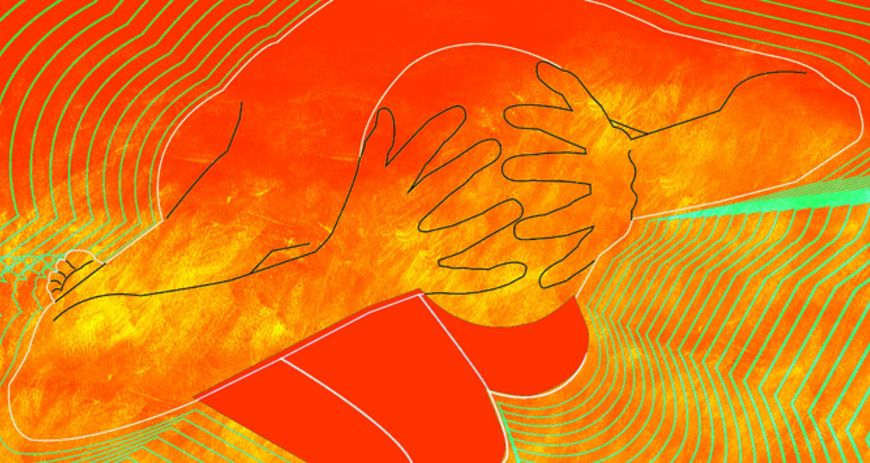 <b>When the head breaks down</b> Despite improved possibilities for treatment, a stroke is still one of the most common causes of death. Image: Simone Golob/Corbis

After a stroke has occurred, every minute counts. The new ray of hope is a so-called micro-catheter, with which doctors manually remove the dangerous blood clots from the blocked vessel. But it will take time before this treatment is available to every patient.

I have to say goodbye to Hartmut. That is the only clear thought that is surging through the mind of Thomas E. He woke up in the middle of the night, wet the bed and now the right half of his body is entirely paralysed. He doesn’t know what is happening to him. When he tries to call out to his partner, he is only able to produce babble out of his mouth. So this is the end – he’s convinced of it. But his saving grace is the fact that husband Hartmut is a light sleeper. He makes the emergency call immediately – and within just a few minutes the 48-year old is being transported, under suspicion of a stroke, to the nearby Charité in Berlin-Mitte. In less than 20 minutes he is lying in the Stroke Unit – one of 264 stations nationwide that is specialised in stroke-patients. A large blood clot has entirely blocked Thomas E’s left-inner carotid artery. The brain has already been damaged – this is evident from the severe motor failure symptoms and loss of speech. If the artery is not re-supplied with blood as soon as possible, Thomas E is threatened with permanent brain damage and severe disabilities.

Behind cancer and heart attacks, strokes rank among the three most common causes of death in Germany. About 270,000 individuals are affected every year, and one out of three remains disabled or is in need of care for the rest of his life. “Without blood and oxygen supply, roughly 2 million out of a total of 100 billion nerve cells in the brain die per minute,” says Martin Ebinger, senior physician at the Charité Klinik für Neurologie. He has been conducting research for many years on how the supply chain during a stroke – from emergency phone call to successful rehabilitation of the patient – can be improved. Physicians differentiate between two kinds of strokes, Ebinger explains: the haemorrhagic stroke triggered by cerebral haemorrhage and the ischemic stroke, which is caused by the occlusion of a cerebral vessel, at 90% the most commonly occurring stroke – as in the case with Thomas E. “We only have a window of a few hours until it becomes too late to carry out targeted measures,” says Martin Ebinger. He can still remember Thomas E quite well; not only because he is still relatively young. “When the patient arrives here within four-and-a-half hours after an ischemic stroke, we execute the standard method – the thrombolysis. This involves injecting a drug that inhibits coagulation within the body, thus dissolving the blood clot,” explains the neurologist. “In Thomas E’s case, this was unfortunately not enough for successful removal of the entire massive thrombus. The situation was extremely threatening to him.”

But Thomas E is fortunate enough to experience his second blessing in disguise: He is still within the perimeters of the time window in which a different treatment is still possible, and thanks to the fast supply, tissue damage within the brain has not advanced too far. These are the exact conditions required by the doctors for a second intervention. Starting at the femoral artery, they push a micro-catheter – a so-called stent retriever – up through the carotid artery to the cerebral artery. Attached to its tip is a wire-mesh net, which can be folded out to capture the thrombus. In the latest models, negative pressure in the catheter sucks it up and prevents the escape of very small pieces of the clot up into the brain, which would initiate a new stroke. This method, which the physician controls with the aid of a contrast medium and imaging techniques, is now celebrated all over the world as the ray of hope in the war against strokes. But the procedure is so complicated that it demands extensive experience and can only be deployed by specially-trained physicians.

This invasive catheter treatment is however not new. It has been applied in Germany since 2009, but only approximately 13,000 patients annually are able to benefit from the procedure and only 99 stroke units nationwide are properly equipped. The method came under fire for a long time in the beginning, because there was still no scientific documentation for its effectiveness. Only now, four new studies have shown that treatment results are significantly improved when the physicians make additional use of the special catheter.

“We now know for certain that this therapy with modern stent-retrievers increases by 20 to 30 percent the chances for our patients of surviving a severe stroke with only limited adverse effects. These are spectacular results,” says Matthias Endres, Director of the Charité-Klinik für Neurologie and member of the executive board for the Deutsche Schlaganfall-Gesellschaft. For him the biggest challenge now is to improve the structures in such a manner that every patient who comes into consideration is allowed to receive the therapy – regardless of whether he lives in the country or in a metropolitan area.

During the acute phase, the principle is still nonetheless valid – what the physicians refer to as “Time equals brain cells” – the faster the blood supply in the brain is re-established, the bigger the chances of survival are during an ischaemic stroke. It is important to establish the time of the stroke as precisely as possible because, after a specific amount of time has elapsed certain therapies, such as this one involving the stent-retriever, can even cause more damage.

The emergency response physician must therefore decide whether a detour must be taken to a hospital with a catheter laboratory, and whether respective expertise is advisable. If the patient is non-responsive, medical practitioners can only ascertain this with the aid of imaging technology such as computer tomography (CT), or magnetic resonance tomography (MRT).

“Some patients seem to regenerate better than others after a stroke”

A normal ambulance is not equipped for this eventuality. For this reason since 2011, the Berlin Fire Department operates the “Stroke-Einsatz-Mobil” (STEMO) in mutual cooperation with the Center for Stroke Research Berlin of the Charité. “On board we can make a diagnosis and already initiate thrombolysis in transit,” explains Senior Physician Martin Ebinger. He coordinates the neurologists specialised in stroke treatment during the medical procedures and has gained considerable experience with the STEMO. There is also telemedical equipment on board, through which CT images can be discussed with a neuroradiologist, and further interventions planned efficiently.

For basic research the chronic phase in the stroke offers the best approaches during the regeneration of the body. “We want to understand what effects the body’s self-healing powers have to compensate for brain damage – especially in early mobilisation or under the influence of anti-depressives,” says Mattias Endres. “The crucial injuries inflicted during a stroke are generated at a molecular and cellular level within the first few minutes. I am frequently not able to take immediate clinical action in order to avoid this.” Together with his colleague Holger Gerhardt from the Max Delbrück Center for Molecular Medicine in the Helmholtz Association, Endres would like to conduct research on regeneration and vascular re-formation after a stroke. It is fascinating for the scientist Gerhardt, how the vascular system and nerve connections convert and re-organise, in order to compensate for dead tissue – the phenomenon of “plasticity”.

“Some patients seem to regenerate better than others after a stroke. In the event of vessel occlusion as well as stroke, the vessel network in these patients is able to more quickly manufacture a detour for the blood and oxygen supply. Thus they are better protected in case of a stroke. We have found out that endothelial cells that line the inner wall of vessels are capable of moving dynamically and modifying a vessel. Here there are genetic interrelationships that we would like to take a closer look at,” the expert for blood-vessel regeneration explains. But he also mentions that it is too early for a molecular therapy approach with human beings. Cooperation plans are currently being made.

It was three weeks ago that the stroke occurred. Thomas E is in a rehabilitation clinic in Berlin – he is sitting in a wheelchair. He was able to speak again already after three days in the Charité. His quick admission into the stroke unit and treatment with the stent-retriever saved his life and saved him from an even worse fate, he believes. “I have been here two weeks now, and have learned quite a bit. Previously, I wasn’t able to do anything. In the beginning they put me into a bed or sat me down in the wheelchair. And now I am able to go to the toilet alone and stand in front of the sink to brush my teeth,” he says. Then he laughs: “But I’m not able to dance yet!” Whether he will completely relearn all of his skills, he doesn’t know. But he does know that the odds are good