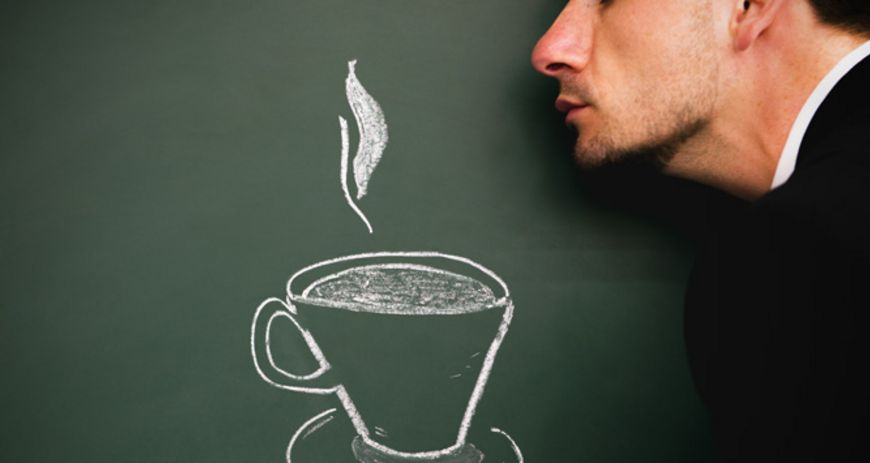 Stimulant in a cup: Three out of four Germans drink coffee on a daily basis. Does it mean that they are all addicted? Picture: David-W-/photocase.de

The “Time after Time” Effect

Coffee, smartphones, sex – drugs are not the only thing to make us addicted. To what degree a dependency is considered damaging, is a personal opinion.

Don’t be shocked: It’s most likely true that you are, at least in the broadest sense, addicted. It might be that you don’t smoke, don’t drink excessive quantities of alcohol, and are aware of drugs through, at most, a few nights from your late-teenager years. But perhaps there is a slight hint of this, when you drink your first cup of coffee in the morning and you realise that an exceedingly pleasant feeling sinks in with your first sip – and now your day can begin properly. Or when you are out shopping on a Saturday afternoon and a sense of elation comes over you from the purchase of a new piece of clothing or an amplifier for your stereo.

“When a person is seeking out these sensations on a regular basis and perceives them as a source of happiness, something is happening in the brain that is in part the same process as the feeling, for example, when smoking,” says Chantal Patricia Mörsen from the Department of Psychiatry and Psychotherapy at the Charité Berlin. Addiction – and this is one of the most profound findings in recent years – does not necessarily require substances that we have to sip, inhale or otherwise assimilate. It is enough to do something that, time after time, affords pleasure and, for a moment, makes us happy. The brain then takes care of the rest of it on its own.

The functionality is quite similar. “While smoking, substances travel from cigarette smoke through the lungs and blood circulation into the brain and accumulate there on so-called cell receptors, which when activated, contribute to the generation of a false sense of pleasure,” says Martina Pötschke-Langer. The addiction expert directs the Deutsche Kollaborationszentrum für Tabakkontrolle sponsored by the World Health Organisation (WHO), and works in the administrative department Cancer Prevention at the German Cancer Research Center of the Helmholtz Association. The same effect could also be derived without these substances: “It’s not like our bodies possess the receptors specifically so that we can take drugs that accumulate there,” says Charité psychologist Chantal Patricia Mörsen. It is the receptors’ function, she says, to guide behaviour in a proper direction. “When we consume good food, or have good sex, this is good for our body, it provides vitality and, in the best scenario, even offspring,” says Mörsen. This is why dopamine releases very pleasant things in the so-called Nucleaus Accumbens, a section of the brain. Different from the substances that come out of cigarette smoke, dopamine appears in the brain naturally. “And the next time, prior to the same meal or sex with the same partner, dopamine is released again, which motivates us to actively move towards the joyful event,” says Mörsen.

One of the central processes that form the basis for addiction in the brain is thus not bad, per se. On the contrary: “Nature has created a system here to motivate us to pursue essential activities,” says Gerhard Meyer from the Institute of Psychology and Cognition Research at the University of Bremen. On the other hand, if this reaction is misdirected, it can quickly become dangerous. This occurs while smoking not only because of the substances that influence the gratification system; rather, it is also because of the body’s own dopamine that is additionally released.  This has to do with the fact that smoking is perceived as a pleasant experience. One stands in a group and chats, or one enjoys the view from the balcony alone – for some individuals, going to “have a smoke” is one of the highpoints of the day. “Smoking became socially respectable over a period of almost a century.  Although we now oppose somewhat the lobbying by the tobacco companies and have been successful in considerably reducing the number of teenage smokers, the image cannot be reversed from one day to the next,” says Martina Pötschke-Langer.

The extent of damage to our health that smoking can cause has been common knowledge for quite some time now – the list of diseases spans from lung cancer to atherosclerosis to chronic forms of bronchitis. There are 20 million smokers in Germany, in addition to almost two million alcohol abusers and between 1.4 and 1.8 million drug addicts. It is hardly a surprise then that the concept of addiction carries a negative association in society – and that behavioural patterns are quickly stigmatised: today people talk about shopping addiction, smart-phone addiction, internet addiction, television addiction, sex addiction, work addictions, chat-room addiction and pornography addiction – similar to the way that a fear of reading addiction made the rounds in the 18th century.

“Addiction is not a one-way street. Many people are able to escape addictive behaviours without professional help”

But addiction is not always something negative. The gratification effect, which has a lot in common with a manifest addiction, also plays a role in the lives of all those people who would, without hesitation, consider themselves to be non-addicted – and even has positive effects sometimes. The gratification effect can begin with clearing off the desktop in the office at closing time; and because it is such a nice feeling to have it clean before you go home, you simply don’t want to forgo that. Or those people who go to the dance-club every Saturday evening, or every Sunday afternoon to a dance café, because he or she enjoys the thrill of flirting, are exhibiting, strictly speaking, initial symptoms of addictive behaviour.  And the fact that many individuals go out jogging a few times every week  also has as its consequence a whole series of positive experiences, as well as the gratification effect – this is an everyday addiction that even results in positive after-effects. But the gratification effect is also responsible for excessive viewing of TV-series – some fans watch five, six episodes at a time. And the same can be said of non-stop consumption of chocolate or gummy bears.
But what then is genuine addiction? Three out of four Germans drink at least one cup of coffee daily – are they all addicted? Five to eight percent of the population have, according to expert estimates, a high risk of becoming addicted to shopping. But at what point are they actually addicted? Where is the dividing line between a dangerous disease and a harmless habit?

“Those who have enough money can purchase a lot without it becoming a financial disaster. And those who are slim don’t have to worry about putting on weight because of frequent chocolate consumption,” says Psychologist Chantal Patricia Mörsen. And the daily dose of caffeine most likely won’t do any damage as long as the individual doesn’t have high blood pressure. The point can be determined at which an addiction turns into something pathological when it becomes harmful to the affected individual.

But a harmful addiction has other characteristics as well. “It frequently serves as compensatory satisfaction for something that one can’t otherwise get,” says Mörsen. The individual who, for example, doesn’t get recognition at work or reassurance in a marriage – he or she seeks out positive feelings and experiences elsewhere. The addictive behaviour then becomes a dependable straw that one can always grasp at – thus enabling an escape from one’s problems. But the stimulus intensity soon has to be increased in order to obtain the same level of satisfaction as in the beginning. This is the beginning of a vicious circle.

How deeply the individual is involved in his/her addiction spiral – with gambling for example – can be measured on the basis of a catalogue of nine characteristics; when four of them are fulfilled, experts consider it to be an addiction. Included in these characteristics is, for example, development of tolerance – i.e. increasingly higher bets are necessary in order to generate the same sense of happiness. Another is the loss of control that leads a player to bet yet another 500 euros in the casino, after he had set a limit of 100 euros for himself.

This catalogue of characteristics is transferable to many other addictions. There is a simple justification behind the fact that gambling addiction specifically – which affects almost 500,000 individuals in Germany, according to a study published by the Federal Centre for Health Education – has been so thoroughly documented. As the only addiction that is triggered by a behaviour, it is entered in the international Diagnostic and Statistical Manual of Mental Disorders, the so-called DSM. In professional circles, it recently attracted a lot of attention due to the fact that gambling addiction was re-categorised – from so-called impulse-control disorders to non-substance related addictions, i.e. behavioural addictions. “Expansion of the addiction concept to include non-substance related addictions has huge practical relevance, especially in reference to therapies,” says the psychologist Patrick Trotzke from the University of Duisburg-Essen.

But how can a pathological addiction be treated? Those who are not able to escape on their own can, according to Charité expert Chantal Patricia Mörsen, seek addiction counselling or associations such as Gamblers Anonymous, which can in the mean time be found in every small city. One should only seek out inpatient treatment as a last resort. “Addiction is not a one-way street. Many people are able to manage without professional help to escape their addictive behaviours long enough to allow the pressure to decrease,” says Mörsen.