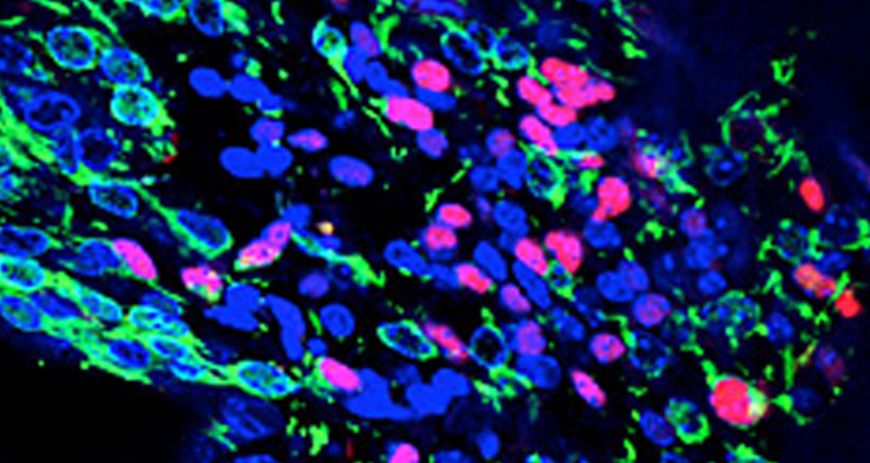 The root of all evil

The existence of cancer stem cells has been subject to debate for a long time. Yet today it is known that they are the cause for many forms of cancer. Across the globe, scientists work intensely on finding out how to locate and eliminate them in the body. This is how cancer could be nipped in the bud

"Wolves in sheep's clothing" – that is what Andreas Trumpp from the German Cancer Research Center (DKFZ) in Heidelberg calls the cancer stem cells, the identification of which gave rise to a new research field in the past years. Like their healthy counterparts, they have the ability to constantly renew themselves, making them practically immortal. According to the latest insights, they are not only the cause for many forms of cancer, but also are made co-responsible for the recurrence of a tumour subsequent to a supposedly successful treatment and for the formation of metastases. "They have characteristics like normal stem cells, however, the cellular and molecular control mechanisms are suspended, which makes them highly dangerous to the organism", says Trumpp, who heads the Division of Stem Cells and Cancer at the DKFZ.

The existence of cancer stem cells had been debated for a long time until a Canadian research team was able to verify them for the first time in 1997 when investigating leukaemia. By now, researchers have found cancer stem cells in many other kinds of tumours, for instance, in breast and pancreatic cancer, in ovarian and brain tumours. They are generated by genetic alterations of normal stem cells and their direct progeny, the so-called precursor cells. Similar to normal stem cells, few cancer stem cells produce a huge number of progeny, which in turn quickly multiply and form the actual tumour mass. However, in doing so, the progeny gradually lose their stem cell characteristics.

Cancer stem cells are highly resistant to radiation and chemotherapy. Whereas the swiftly dividing "normal" cancer cells react very sensitively to these treatments and the tumour shrinks at first, the cancer stem cells often are in a state of temporary deep sleep and thus withstand the treatment attacks. This is why individual cancer stem cells often remain in the body after completion of treatment – and they can generate a renewed onset of cancer soon after or even years later. If these cancer stem cells have acquired further mutations in the meantime, the resurgent cancer is even more malignant than before and usually quickly generates metastases elsewhere in the body.

Andreas Trumpp is convinced that successful cancer treatment can be effected only, if both the "normal" cancer cells and the "parent cells" are destroyed in a targeted manner. Yet since cancer stem cells account for only a fraction of the tumour, depending on the kind of tumour and stage, searching for them is akin to finding the needle in the haystack. "We develop methods for identifying the relatively rare tumour stem cells. This is the only way to analyse them in detail and to develop treatments for targeted combating", describes Trumpp the goal of his research. For this, he and his team first need to arrive at a detailed understanding of the biology of the cancer stem cells. For instance, they search for external distinctive features, so-called biomarkers, which are characteristic only of cancer stem cells of a certain kind of tumour. Moreover, Trumpp and his colleagues want to find out how to rouse the cells from their deep sleep: "If we could awaken these sleepers, it might be possible to eliminate cancer stem cells also with traditional forms of treatment and thus to treat the whole disease more effectively." The support base would be destroyed. Trumpp and his team have already identified specific messengers that awaken dormant healthy blood stem cells. Using the same signal, they could also activate dormant neoplastic blood cancer stem cells to render them more susceptible to subsequent treatment.

Trumpp and his team recently celebrated another success – combating metastases. Individual cancer cells have the ability to split off from their main tumour and to disseminate via the blood, spreading throughout the patient's body. Researchers call these circulating cancer cells. They are made responsible for the formation of metastases. So far, however, scientific proof of this was unavailable. "We were convinced that only a few of these circulating cancer cells were able to create new metastases in other organs", says Trumpp. After all, many patients do not develop any metastases at all, even though cancer cells do circulate in their blood. "So these must be cancer cells with very specific abilities. We assumed that these were metastasis-inducing stem cells, which derive from the cancer stem cells of the primary tumour." Indeed, Trumpp and his colleagues discovered circulating cancer cells in the blood of breast cancer patients that initiate metastases and feature cancer stem cell characteristics. The Heidelberg researchers have made progress also with regards to how to combat these cells. They discovered three characteristic proteins on the surface of the circulating metastasis-inducing stem cells, one of which they recognised from breast cancer stem cells. The more of these cells featuring those three markers could be traced in the blood, the worse was the prognosis for the patients. Now the researchers intensively investigate whether these three proteins may be used as targets in the context of breast cancer treatment.

The team of Hai-Kun Liu's DKFZ Young Investigators Group likewise researches cancer stem cells. They recently discovered a key molecule of cancer stem cells in the mouse model, which are responsible for the development of malignant brain tumours. When they switched off production of this protein by genetic interference, the cancer stem cells lost their ability for self-renewal and the cancer ridden mice survived for longer. The brain tumours that Liu and his team researched in mice are similar to aggressive glioblastoma in humans. "We assume that blocking the protein can curb also growth of aggressive brain tumours in humans", says Liu. They have already achieved this in the Petri dish with human glioblastoma stem cell lines. So the protein would be a promising target structure for treatment and the wolves could thus possibly not only be exposed, but also combated.

Prof. Andreas Trumpp heads the Division of Stem Cells and Cancer at the German Cancer Research Center (DKFZ) in Heidelberg and is also Managing Director of the Heidelberg Institute for Stem Cell Technology and Experimental Medicine (HI-STEM gGmbH), which was established in 2009 as a public-private partnership by the DKFZ and the Dietmar Hopp Stiftung with the aim of rendering basic research results useful to cancer medicine in the best manner possible. "The mission of the scientists in my division and at HI-STEM is to research tumour stem cells in detail, to develop innovative approaches for diagnosis and treatment and to thus improve the chances of survival for cancer patients", says Trumpp.