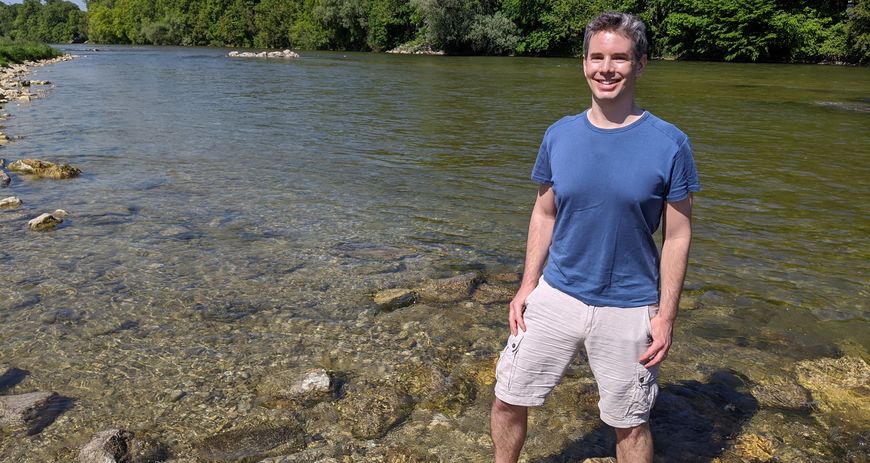 The Bavarian from Berkeley

American cell biologist Ben Engel liked Munich so much on his first visit nine years ago that he immediately decided to stay there. He now uses high tech methods to investigate the inner workings of cells at the Helmholtz Pioneer Campus.

Ben Engel’s career as a researcher started with cleaning. He had just enrolled at the University of Berkeley and had a student job as a gofer at the synchrotron there. “And then they had a planned break in operation and we had to clean the inside of the ring, which most people never get to see,” the now-39-year-old reflects. He would walk around inside the particle accelerator with a cleaning cloth, gazing in awe at the tremendous technology – “That opened my eyes to science!”

Nowadays, Ben Engel heads a working group at the Helmholtz Pioneer Campus in Munich and, even though he no longer has anything to do with particle accelerators, he still has a weakness for large complex devices. The cell biologist uses electron microscopes for his investigations along with a special technique whereby he freezes cells and cuts them into extremely fine slices, thus allowing him to gain three-dimensional insights into what is happening inside the cells – and he quickly gave his research group the fitting name of the “Cell Architecture Lab”.

It was fortuitous that Ben ended up in Munich, where he has since settled into family life and has two sons. “I’m a California kid”, he says in a broad American accent: For the first 30 years of his life, he had never lived outside of California. When he was still a child, long journeys through the Sierra Nevada mountain range with his parents made a great impression on him. “They are powerful and lonesome mountains, not like the Bavarian Alps, where you can get a cool beer on every peak,” he says with a laugh. “My mother taught me the names of all the plants we found when we went hiking.” After that came high school, then the University of Berkeley, followed by graduate school at the University of California in San Francisco. At that time, he got to know the wider world mainly through travelling. “I’ve visited 52 countries with my wife and since we’ve had kids we simply take them with us on trips,” says Ben Engel. And what about Munich? He came here in 2011 to take up a position at the Max Planck Institute for Biochemistry. It was his first visit to Germany – “And as we wandered around the Viktualienmarkt and the English Garden we immediately felt at home.”

“It’s wonderful to observe the molecules in cells as they perform the dance of life!”

You can see the extent to which he has become a real native of Munich over these past nine years once he starts talking about his work – drawing a comparison with a broad grin on his face: “You see, people here in Bavaria love cars”, he says, “now imagine that you want to repair your old beaten-up car, but have no real idea of how the engine works – you won’t get very far!” That’s his standard response whenever someone asks him whether his basic research will ever really serve any useful purpose. And then he starts to talk about his research: about organelles, the tiny sub-structures within cells that he is investigating. About the process of cryo-electron tomography, which he uses to acquire three-dimensional images at such a high resolution that he can map the structures of individual molecules within the cells. And about the cilium and the chloroplasts of algae that are the focus of his attention. “We are exploring the relationship between the form of the organelle and the function of the macromolecule,” he explains. “Our aim is to understand how organelle architecture directs molecular function.” In part, he owes the fact that he can uncover the secrets of cells to such an extent to the rapid technical advances made in recent years, during which imaging processes have improved significantly. “I’m a highly visual person,” Ben Engel says, “It’s wonderful to observe the molecules in cells as they perform the dance of life!” He therefore talks enthusiastically about a “window into the cell”, when he describes the highly complex technology that forms the basis of his work.

The conclusions that he draws from his observations and experiments could rapidly gain significance in terms of actual application – hence his metaphor about repairing cars: Marine algae, for example, absorb half of global CO2 emissions. The question of how chloroplast architecture responds to climate change thus suddenly becomes a key issue in the battle against global warming. Ben Engel’s team is out and about all over the city carrying out their work: They prepare the samples in their laboratories at Helmholtz Zentrum München, while the technology needed for imaging is located at the Max Planck Institute. Along the way, though, Ben Engel delves further into real life in Munich. “Over recent years, I’ve had several very interesting offers to return to America,” he says. Each time he politely declined: “We want our kids to grow up here in Munich!” In the meantime, his oldest son is six and preparing to start school. He is sending him to a state school, of course, says Engel – that is the best way for him to become bilingual, since he already hears English at home. “I am constantly amazed how well it’s working out for him with German,” says Engel, who himself has scarcely found time to learn vocabulary and grammar over the past nine years due to his busy schedule. He resignedly sums up the result: “My son corrects me all the time!”