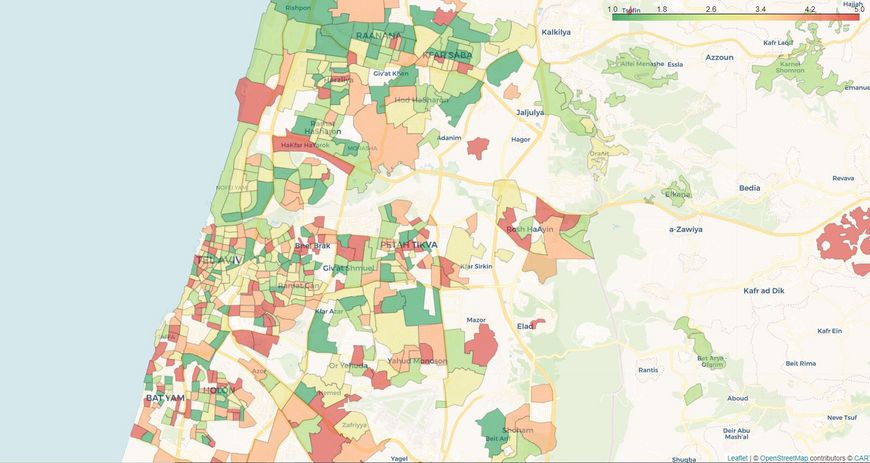 The map shows a visualization of the spread of symptoms in the Tel Aviv area. Picture: Weizmann Institutes

Israeli researchers have developed a method to predict the spread of the novel coronavirus. It allows the authorities to focus efforts on areas where an outbreak is expected and to facilitate action in other areas.

Andrea Frahm, responsible for bilateral Innovation Management and Technology Transfer at the Helmholtz Israel Office in Tel Aviv, met the Team from Prof. Eran Segal’s lab in a Zoom Meeting and spoke to Hagai Rossmann, one of the team’s data scientists to get first hand information about the tracking tool. It detects COVID-19-typical symptoms in the population and can recognize patterns of spread with the help of artificial intelligence.

Your tracking tool which started as a Weizmann initiative quickly raised interest with the Ministry of Health as well as with Israels leading health care providers before it was officially implemented as a joint endeavour by the Ministry of Health. The entire State is now using it. How did the idea come together?

Eran Segal came up with the idea about three weeks ago, aiming at tackling the pandemic with data information. South Korea is a good example: the more information you have the better you can manage the battle with the disease. Of course, the best way is to test as much as you can, which in Israel is still limited. So we thought about a complimentary strategic tool, which comes as a simple one-minute-survey for Israeli citizens to complete, no matter if he/she is sick or healthy, once a day, every day, stating what symptoms they’re having related to COVID-19. Everyone can submit the information through the website coronaisrael.org, available in various languages. We went online about three weeks ago and we have had a massive initial response starting with about 50,000 submissions in the first week. We are now seeing a rapid increase to over half a million submissions a week. It really exploded, and our team has been on national media on a daily basis ever since. We’ve been working closely with the Ministry of Health from the beginning and they have now adopted our survey, officially sharing it with all the primary health providers in Israel.

What has been your main goal so far?

Our goal is to get to one million surveys a day, which is 20% of Israel‘s population. Once we know the baseline of symptoms of the population and once we can see a peak in certain areas we hope to be able to predict cluster outbreaks in certain regions in advance. A good example is the outbreak in the ultra-orthodox neighbourhoods here in Israel, because the majority of Israel’s infected patients live in these areas. So for example in Bnei Brak, an ultra-orthodox city near Tel Aviv, we were able to see the development in our data before the outbreak.

Do you also track personal data of people who provided the information?

We are acting as an academic institute, in cooperation with with the Ministry of Health. We’re connecting the data we have with the data the Ministry of Health can provide about infected individuals and their locations in the past in order to identify potential future outbreaks in advance. We want to avoid any privacy issues so we are not identifying people as individuals. All we are asking for is street level information.

How did you manage to gather the information from ultra-orthodox neighborhoods or other minorities, ie the Arabic population, considering that some of these communities don‘t use the internet?

That‘s indeed a challenge but there were about 2000 to 3000 of them actually completing the survey. We are trying to get outreach to all kinds of minority populations. For instance ,Eran went on Arabic TV a few days ago to engage with people to complete the survey. Furthermore, we’re trying to talk to community leaders in those areas and we do see a peak in the data afterwards. It’s a big problem we are trying to tackle pro-actively.

Is the tool  available to the Palestinian Authorities aswell? Without going into politics I assume the survey would be superhelpful to prevent outbreaks in Gaza or the Westbank? What about other countries?

Everyone in the region is able to complete the survey, and being in a continuous building phase, we are currently planning to roll it out internationally. Many countries have already showed interest and there has been an international consortium which has started with various countries. Our big goal is for everyone to share their data so we can all learn from each other and combat this challenge together.

Moving forward, what would be the next step? What are your plans with regard to a potential exit strategy?

We have a few directions. First of all we want to use much more sophisticated models. We want to know ahead of time, once the symptoms start which demands a lot of data and a lot of modelling effort. Furthermore, as said, we would like to pull data and models from researchers across the world to make the tool more effective. And, of course, as far as a potential exit situation is concerned, we will utilise the tool to identify places that can be opened up on a step by step basis.

If you are interested to take part in the international consortium please contact Prof. Eran Segal, email: eran(at)weizmann.ac.il. For any updates and information about our bilateral collaborations please get in touch with our Israel office, email:  tel-aviv(at)helmholtz.de and/or follow us on Twitter: https://twitter.com/helmholtz_i