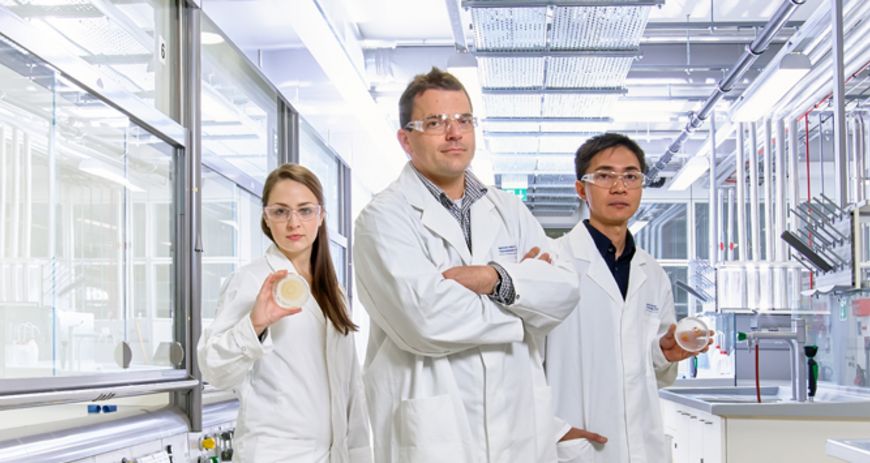 They are one of the worst problems facing German hospitals: germs that have become resistant to antibiotics. In their battle against perilous bacteria, scientists are now hoping for positive results from two new substances

What Rolf Müller discovered this year could finally represent the crucial turning point in a ten-year war. It has been a merciless war, with an arms race, nationwide offensives, mass mortalities and sophisticated defence strategies. Germs are running riot in German hospitals, day and night. But we can’t recognise these insidious perpetrators with the naked eye as they are just too small. Hands, noses, creases in the skin and the mucous membranes of the patients, visitors, nurses and doctors are the scene of the crime, along with doorknobs and insufficiently-cleaned nightstands – actually, almost everything you find in a hospital.

In Germany more than 1,500 individuals die every year from infections caused by MRSA

And thus bacteria that don’t belong on the surface of human skin – and certainly not in human bodies – attempt to take up residence precisely there. If they do settle there, patients are given antibiotics with the intention of destroying the bacteria. Once the antibiotics have been administered over several days, they usually annihilate almost all of the problem germs – however, “almost all” remains the crux of the issue in hospitals. Those bacterial strains that are able to survive such a massive assault of antibiotics have most likely developed, by means of mutation, better defence mechanisms that render them resilient and dangerous. Antibiotics are powerless against them, and, ironically, even promote the spread of the germs. Once the antibiotics have wiped out all other bacterial strains, the multi-resistant pathogens have even more room to wreak their havoc.

Bacterial colonisation of the skin is seldom a problem, but in people with a weakened immune system, or with injuries or wounds from operations, germs can quickly invade the body, where they can contaminate the blood or cause lifethreatening lung infections, for example. In recent years, these multi-resistant germs have made tens of thousands ill and caused the deaths of more than 1,500 patients each year. There is thus an urgent need for improved antibiotics.

Perhaps Rolf Müller’s working group can bring this much needed relief. Müller is Managing Director of the Helmholtz Institute for Pharmaceutical Research Saarland, and he and his team have identified two active ingredients that are highly effective against the multi-resistant common germ Staphylococcus aureus, also known as MRSA, against which classic antibiotics can achieve little. “These substances are effective against MRSA, but leave human cell cultures unscathed. It looks like we’ve hit the mark at this point,” says Müller.

Disciformycin A and B, as the two newly discovered substances are called, are natural products: Müller’s team did not produce them in the laboratory; rather, they found them with a different bacterial strain, the mycobacterium. Mycobacteria are prevalent where decomposing plant remains are found: in compost heaps, in soil, in gardens and woodland, and in animal faeces. Müller has been tracking this type of bacteria for several years now; whenever he or his employees take excursions with the institute, they always collect soil samples.

Subsequently, the team performed laboratory analyses to find out whether the discovered strains of mycobacteria were producing something that destroys other pathogens such as Staphylococcus aureus as part of the competition for space and nutrition. “Mycobacteria look quite promising, because they are able to survive in all possible complex environments and, indeed, against other bacterial strains as well,” says Müller, who has been engaged in the quest for new substances that function as antibiotics for more than 20 years.

One Monday morning a few months ago, one of Müller’s staff checked the cell cultures and discovered an “inhibition alarm” in one of the samples. In other words, an extract from the mycobacteria was inhibiting the Staphylococcus aureus. The team of biotechnologists and pharmacists got excited, and conducted further tests. Over the course of several years, Müller and his colleagues had assembled a database of all the substances known to them from the mycobacteria. This gave them a technological head start that was the envy of several pharmaceutical companies. The database allowed the substance responsible for the inhibiting effect on the bacteria to be identified faster. When the extract from the new mycobacteria was fed into the database, the group found an entirely new substance, one that appeared to inhibit the growth of the bacteria in a different way to classic antibiotics.

The fact that a novel therapeutic mechanism has been discovered makes the whole thing quite promising,” says Reinier Mutters, a microbiologist and head of the Hospital Hygiene department at Philipps-Universität Marburg. “Many antibiotics disintegrate the bacteria’s cell wall. This is good for treating patients, because human cells don’t have a cell wall, which is why antibiotics that affect the cell wall have almost no undesired side effects. However, over time they have been deployed so often that those bacterial strains whose cell walls are vulnerable to antibiotics, slowly die out. Conversely, resistant strains that have developed defence mechanisms are able to propagate. Substances that affect the cell wall are practically powerless against today’s multi-resistant germs.” Mutters goes on to say that some germs have become resistant particularly quickly because sometimes antibiotics are not being administered consistently or for the full period of time. This is “evolution in the fast lane”. Consequently, multi-resistant germs are becoming widespread: about 12 to 25 percent of the Staphylococcus aureus strains in Germany have already become multi-resistant, and in other countries such as Poland or the US, where antibiotics are administered more often, the rate is even higher, at more than 50 percent.

As long as infections involving resistant germs continue to be treated improperly, an increasing number of people will be at risk – in hospitals, of all places. “The death rate of patients who have had an operation with no infected wound is almost three percent. Ten percent of those who have had an operation and been infected with the conventional Staphylococcus aureus die, while the death rate of operation patients who have been infected with multi-resistant Staphylococcus aureus is around 20 percent,” says Mutters. Patients in intensive-care and geriatric units are especially susceptible as their immune system is frequently impaired.

There are still a few antibiotics that have some impact on multi-resistant germs. “With vancomycin, for example, you can still get MRSA somewhat under control,” says Dirk Schlüter, Director of the Institute for Medical Microbiology and Hospital Hygiene at University Hospital Magdeburg. He adds, however, that this is a so-called “reserve” antibiotic whose application involves a higher rate of risk: the dosage has to be adjusted to the kidney function to achieve an effective level, and also to avoid overdoses with undesired side effects.

Multi-resistant bacteria are particularly problematic for children, too. “For newborns and babies, infections with multi-resistant germs are often a matter of life and death,” says Schlüter. This is partly due to the fact that children are not permitted to receive certain antibiotics. The problems are being exacerbated by the spread of multi-resistant germs outside hospitals.

With the aid of the discovered substances and their new therapeutic mechanism, doctors hope to be able to take the germs by surprise in a place where they have not adapted any defence mechanisms and will thus be vulnerable. Schlüter: “Such substances are urgently needed. That’s why researchers are hard at work and why discoveries such as this most recent one are of such significance.”

If the substances discovered by Rolf Müller prove to actually deliver what the initial tests promise, they could stop the spread of the bacteria and destroy them precisely in those places where they could become so dangerous. There is still a way to go until that will be possible, however. Müller warns that the fact that the substance thus far seems to have no undesirable effects on human cell cultures does not guarantee that it will not ultimately turn out to be unsafe for humans. Apart from that, the substances must also be brought to the intended area, which frequently proves to be a challenge; active ingredients aren’t always transported out of the intestinal tract and into the bloodstream, as desired. “And,” Müller adds, “we have to somehow get our mycobacterial cultures to produce the substance in large quantities.”

These challenges are being tackled in a concerted scientific effort. For example, researchers at the Leibniz Institute for Natural Product Research and Infection Biology (Hans Knöll Institute) in Jena discovered a similar substance around the same time as Müller’s team. Only when both groups wanted to register patents did they actually learn of one another’s work. Without further ado, they decided to collaborate in the future and applied for a joint patent. The weapons in the war on germs are undergoing an upgrade.