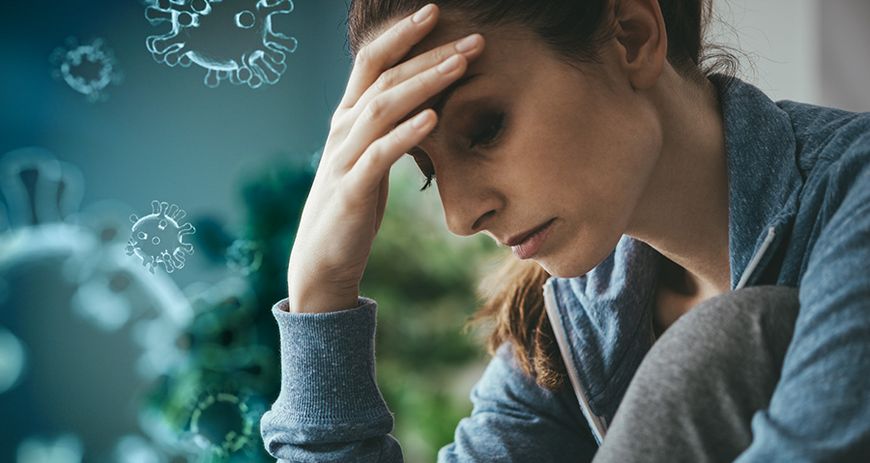 Many COVID-19 patients feel permanently exhausted even months after their disease. Image: Stock-Asso/Shutterstock.com

Permanently exhausted after an infection?

COVID-19 can also trigger chronic fatigue syndrome in some infected individuals. How many patients are affected - and why the disease has so far been difficult to recognize and treat.

After a year with SARS-CoV-2, we know more and more about the virus and the disease it causes, COVID-19. It is now clear that a small proportion of those who become ill can suffer from various late effects after recovery - ranging from shortness of breath to impairment of lung, kidney and liver functions and the brain to temporary loss of smell and taste.

Chronic fatigue syndrome (CFS) is also one of the possible long-term consequences of COVID-19. "Since the summer, we have been seeing more and more patients in our outpatient clinic who are still complaining of persistent exhaustion and many other complaints months after they have been infected with SARS-CoV-2," says immunologist and oncologist Carmen Scheibenbogen, professor at Charité - Universitätsmedizin Berlin and head of the Charité Fatigue Center. Many of these patients met the criteria for chronic fatigue syndrome, she says. "That's alarming - and at the same time, it's not very surprising."

It's alarming because CFS is a serious illness in many cases. It is characterized by permanent, all-encompassing weakness. The manifestations range from significant limitations in everyday life to permanent bedriddenness, combined with stress intolerance. A telephone call alone, for example, can already overtax those affected. Many sufferers are permanently unable to work.

There are only estimates of the actual incidence of the disease. This is because CFS, which is classified by the World Health Organization (WHO) as a neurological disease, is often not diagnosed because many medical professionals are hardly aware of it or incorrectly classify it as a mental illness. It is a clinical diagnosis because there is no test, no blood value, that can directly detect CFS. Doctors estimate that a total of 300,000 to 400,000 people in Germany suffer from fatigue. Women are affected about twice as often as men.

"A viral infection can be a trigger for fatigue syndrome."

Carmen Scheibenbogen believes that infection with SARS-CoV-2 can cause chronic fatigue: "Many of the mechanisms of how the disease is triggered and how it becomes chronic are still the subject of research. But we already know that usually a viral infection, including more frequently the Eppstein-Barr virus, influenza and also coronaviruses, can be the trigger of fatigue syndrome." Studies in chronic fatigue syndrome secondary to other infections suggested that in some people, immune system dysfunction is the cause. Certain antibodies that are produced in response to an infection may then be directed against so-called adrenergic receptors. These are the body's own receptors that are activated by the natural messenger substances adrenaline and noradrenaline and trigger various effects. In very simplified terms, these receptors can be described as basically having an activating effect in the body. They are decimated by the antibodies - which ultimately, and this is also very simplified, inhibits many factors that have an activating effect on the body.

But how often infection with the novel coronavirus causes CFS is far from certain. "If I extrapolate how many COVID-19 cases there were in Berlin and how many patients came to the outpatient clinic with CFS, then I can already imagine that perhaps one percent of all infected people develop fatigue syndrome," Scheibenbogen says. But more studies are needed to make a reliable statement on this. Scheibenbogen herself and her colleagues are currently working on this. It is already becoming apparent that the more symptoms one initially had, the higher the risk of long-term progression.

Exhaustion, or fatigue in medical terms, is one of the most important leading symptoms in acute COVID-19 disease. In a study published in JAMA, the journal of the American Medical Association, Italian physicians led by the Roman gerontologist Angelo Carfì interviewed patients during the infection and in the months thereafter. 80 percent reported suffering from fatigue during the infection - which still seems obvious in view of the course of the disease. For many, fatigue disappears quickly after the acute infection. Two months later, however, 50 percent of patients still complained of fatigue symptoms.

"Overall, we can't cure the disease in most patients so far."

Of course, only a fraction of those who feel fatigued meet the criteria for CFS. The first step is to rule out other possible causes, such as lung dysfunction and other diseases that can be triggered by COVID-19. And in many patients, these examinations do not reveal any abnormal findings; in most of them, the symptoms disappear on their own after six months at the latest. The diagnosis of CFS can therefore be made after 6 months at the earliest.

So far, there is no therapy that treats the causes.

But not only the diagnosis, also the treatment is a challenge. So far, there is no therapy that targets the causes. Rather, it is a matter of treating the symptoms: sleep disturbances, pain, circulation problems. Relaxation techniques such as yoga, autogenic training, mindfulness-based stress reduction and meditation can also help. Especially important: avoid physical overexertion and stress, accept your own limits. Otherwise, symptoms can continue to worsen.

"Overall, we can't cure the disease in most patients so far," Scheibenbogen says. But will that possibly change soon? Research is currently being conducted on this. "People are currently trying to find out more about the disease mechanisms of chronic fatigue syndrome." In other words, to better understand the disease and - this is important for all those affected - possibly to treat it more effectively.

CFS/ME is a complex disease associated with various physical and mental symptoms in addition to severe fatigue. In the majority of patients, the disease begins with the symptoms of an infectious disease. In Germany, CFS/ME is so far little known and is not diagnosed in many affected persons, although it is a relatively common disease. There is as yet no diagnostic marker and no approved medication.

You can find more on the subject on our Corona website