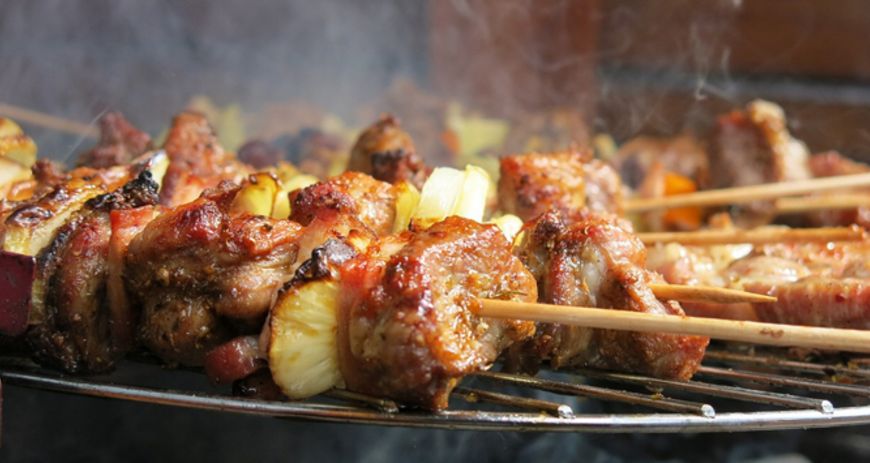 As soon as the weather is nice, the barbeque grills start smoking – frequently more than they should. This is almost always attended by a guilty conscience: That black stuff there – isn’t it better if we cut that off? Shouldn’t we really throw out that piece of meat that got so dark? Can we get cancer from charred food? Don’t panic!

Even if the men tend to take charge behind the grill – many women as well are hooked on the aroma of roasted and barbequed delights, as can only be achieved with a grill. But there are undesirable bi-products that emerge while barbequing – as is the case for all roasting and frying processes – in the crust of meat and fish, as well as vegetables, cheese, fruit and tofu. These are substances with cumbersome names that could be damaging to our health: heterocyclic aromatic amines (HAA) and polycyclic aromatic hydrocarbons (PAH).

PAH arise primarily from the addition of oil marinades and/or from grilling meat with high fat content. When fat drips down into the red-hot coals, the high temperatures disintegrate it and PAH are formed that ascend with the smoke, subsequently covering the barbequed food. “It is better to use emulsion marinades instead of oil marinades when grilling”, advises Wolfgang Jira from the Max Rubner-Institut – Bundesforschungsinstitut für Ernährung und Lebensmittel in Kulmbach. This kind of marinade is characterised by the fact that the oil content is very finely mixed with the water content and herbal ingredients – thus, there are no “thick” oil drops that fall into the embers. The scientist also notes that:  “There is a tendency while grilling with gas and electric grill that fewer heat-induced harmful substances appear when compared to barbequing with coal, from which small particles rise along with the smoke.” Coal barbeques with embers arranged along the side also scarcely contaminate the food being grilled with PAH.

“We know from animal experimentation that HAA and PAH in high doses are carcinogenic, which cannot be excluded for human beings”, says Antje Gahl, nutritional scientist at the Deutsche Gesellschaft für Ernährung. “But we also cannot deduce from this that people who eat something burnt once in a while will then get cancer right away.”  The dosage of HAA administered in the experiments was after all 1000-times higher than a person would typically ingest through food. For good reason, there have been no studies to date involving human test subjects. The appeal to caution is based on exemplary calculations for human beings who consume high quantities that are above-average. Based on precautionary measures, we say: It should be avoided that these contaminants appear in the first place, and we thus recommend that burnt food is not to be eaten without concern”, concludes Gahl. With mustard, onions, garlic and certain herbs such as rosemary, thyme, sage, oregano and basil, it has been established that they can reduce – but not avoid – the formation of HAA. The secondary plant substances that they contain are ingested by the body and function like a protective shield. “If a sausage is actually blackened, one should in any case cut off the charred section”, warns Jira. “And neutralisation of the negative effects by increasing the quantity of herbs and spices is by no means possible.”

Pickled and smoked foods basically do not belong on the barbeque. This is because the nitrite pickling salt in meat products – as it is frequently used in smoked ham, wieners, pork sausage and liver loaf – reacts at high temperatures with the proteins in grilled food and converts into nitrosamines, which also, in high doses, can trigger cancer in animals. Antje Gahl: “It is also valid that – you won’t necessarily get sick, but why would you want to take the risk?”