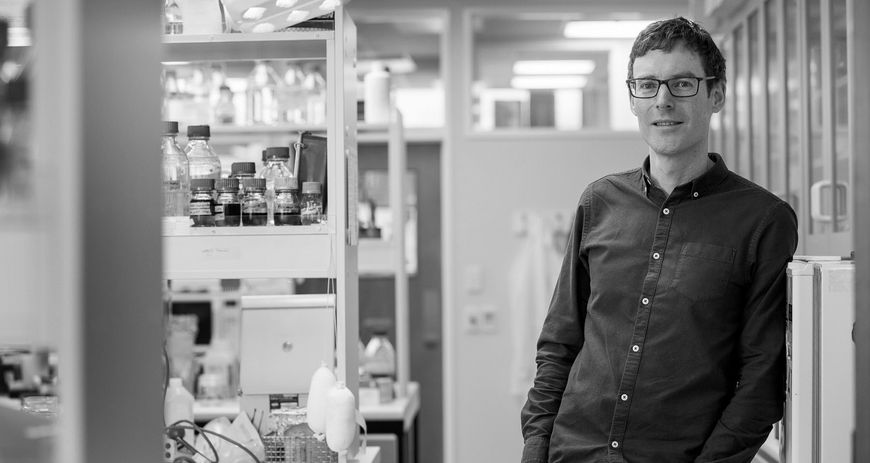 Lord of the phages

Peter Fineran knew as a small child that he wanted to become a researcher and inventor. Today, he heads a laboratory with 18 employees in New Zealand and is a guest scientist at the Helmholtz Institute for RNA-based Infection Research HIRI in Würzburg, Germany, where he is researching the CRISPR-Cas system of bacteria.

A few years ago, when Peter Fineran came across an old exercise book while tidying up, he had to chuckle to himself. He must have been eight years old when his teacher asked him and his classmates to write about what they wanted to do when they grew up. Young Peter from Christchurch, New Zealand wrote (including misspellings): “The job I would most like to do is a scientist because you would be famos for your invenchins. I’d invent all kinds of things and also get money for the things I invent. It would also be fun making things. I also would have my very own laboretey.” And a lot of that is actually: what happened.

From a young age, Peter Fineran was used to science being a topic of conversation at home. Both his parents were botanists. When he finished school, he decided to study biochemistry at the University of Canterbury in Christchurch. He soon realized that he was fascinated by microbiology. Micro-organisms are found everywhere; they make up the majority of the biomass on Earth and allow us to trace biological processes very easily and rapidly. Fineran’s desire “to understand how things work” was what motivated him even as a primary school student, when he would set up experiments or test inventions in the garage at home.

"Bacteriophages outnumber all other organisms and influence numerous processes on Earth, including entire ecosystems"

As an undergraduate, Peter Fineran became interested in the question of how bacteria communicate with each other. Contrary to popular belief, bacteria have the capacity to send each other signals and thus to coordinate their behavior as a group. And since a group at the University of Cambridge specializes in this area of study, he moved to England to do his doctorate. He carried out research into how bacteria agree on whether or not to produce antibiotics. Because this is what they do to eliminate rival types of bacteria in the fight for resources. They only do this, however, if they are present in sufficient quantities to produce enough antibiotics to actually defeat their opponents. If their numbers are insufficient, they save their energy.

After finishing his doctorate, Fineran initially stayed in Cambridge (a place he enjoyed to do science and to live in) to participate in an exciting new project that was taking place there at the time: As a postdoc, he was able to research the question of how bacteria defend themselves against bacteriophages, i.e. small viruses that infect the bacteria and try to kill them. Soon afterwards, he was invited to take up an academic post in Molecular Microbiology at the University of Otago in his native New Zealand. “Our laboratory primarily focuses on finding out exactly how bacteria and bacteriophages interact with each other,” he explains. In other words: understanding the methods bacteria use to defend themselves against attackers and how bacteriophages attack. This is what Fineran, Professor since 2019, and his 18-strong team are working on in the laboratory.

“This is an important field,” Fineran says, “because there are bacteriophages all over the world. They outnumber all other organisms; they are incredibly genetically diverse and influence numerous processes on Earth, including entire ecosystems.” What is more, insights into the processes that take place between bacteria and bacteriophages can also be useful: In 2007, researchers discovered the CRISPR system, a kind of bacterial immune system. From this, molecular biologists developed a method that allows them to repair, deactivate, and modify any desired gene sequences with precision. Bacteriophages can also be used to combat bacteria. This is of particular interest because there are already numerous examples of antibiotic resistance in both medicine and agriculture and an urgent need for new treatments. “Bacteriophages and technologies derived from phages could provide a solution,” Fineran says. Together with his laboratory team, he has been experimenting with using bacteriophages to kill the pathogen that causes the major disease that is affecting kiwifruit production in New Zealand.

Fineran hopes to gain a detailed understanding of the bacterial immune system and phage attack strategies. “Bacteria have 4,000 to 5,000 genes. It will take time to establish which of the genes are involved in these processes.” In order to investigate what happens at the RNA level in this complex interplay, Fineran applied for the Humboldt Research Fellowshipfor experienced researchers. This enabled him to join the Helmholtz Institute for RNA-based Infection Research (HIRI) and the Julius-Maximilians University in Würzburg, Germany. He already knew the team working at these institutes from international conferences.

After completing an initial German language course in Frankfurt in August and September 2019, Peter Fineran was then assigned to the laboratories in Würzburg from October to December, where, to his delight, he got to carry out experiments himself again, an activity usually left to his team of colleagues in his laboratory at home. Since the start of 2020, he has been back in New Zealand where he is teaching and running his laboratory. He plans to return to Würzburg in mid-2020 and in 2021 for five months each time in order to carry out further research. He also hopes to be able to set up an ongoing exchange between the scientists in Würzburg and Otago. Thankfully, it is not just the bacteria who are communicating with each other but also the biologists.