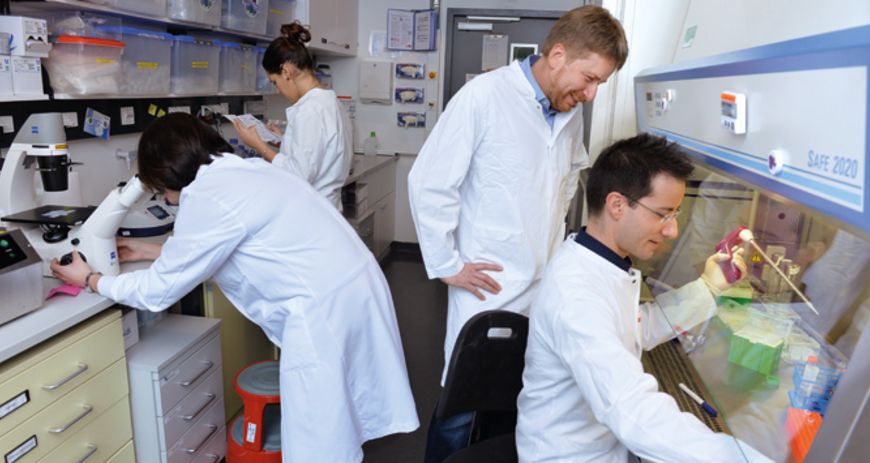 <b>Experimental laboratory </b> The research team led by molecular biologist Frank Bradke (second from right) is examining how nerve cells can be stimulated to regenerate. Image: David Ausserhofer/DFG

Looking for the right method

Research scientists worldwide are endeavouring to stimulate nerve cells to renewed growth – in order to help, at some point in the future, stroke patients, paraplegics or those inflicted with Parkinson’s disease. But why is it that everybody seems to be approaching it with a different method?

He always tells his doctoral candidates: In the first year everything runs smoothly – but then, the second year, that’s the valley of tears. Frank Bradke laughs as he recalls this. “You really need a high tolerance to frustration when 80 percent of the experiments don’t work.” For his part, he has experienced a few things – for example, when he began examining nerve cells and tried to find out how they grow. He had to first of all get such nerve cells to grow at all under the microscope. But these darned things didn’t want to do things his way: They died after only ten minutes. Bradke tried out different things: a change in temperature, pH value, the incidence of light during microscopy, oxygen supply – until everything was set up just right and the cells finally survived. “That alone took an entire year to achieve,” says the molecular biologist. Understanding nerve cells, promoting their growth – numerous scientists worldwide have dedicated themselves to this task. The problem is that nerve cells – also known as neurons – do indeed grow back together, if they have been disconnected by a cut in the finger, for example. They are then able to once again send signals after a few weeks, allowing the patient to perceive touch or cold at that point. But this is not true for the brain and spinal cord. If the lines of transmission between the nerve cells here are severed, these connections are not able to grow back again. The body is equally incapable of replacing damaged nerve cells with new ones. This leads to stroke patients permanently losing certain skills in their brain. Patients with spinal cord injuries are paralysed, completely or incompletely, for the rest of their lives. And patients suffering from Parkinson’s disease lose their motor skills little by little.

In biology, neurology and medicine, scientists are therefore searching for answers: They want to stimulate neurons in both the brain and spinal cord to regenerate, so that injuries could be compensated or even new cells in a mature brain could emerge. Anti-cancer drugs are being researched, as well as viruses in fish and mice, in Dresden, Munich, Bonn, Dusseldorf and Hanover – and of course in US universities such as St. Louis and Boston. Certain facilities are stimulating stem cells to change into nerve cells, while others are involved with the formation of scar tissue that heretofore had blocked new growth. Still others are attempting to stimulate regeneration of neurons with the aid of enzymes and proteins. Many different methods, numerous experiments, small breakthroughs now and again – the phenomenon of nerve cells is gradually being surrounded from many different directions. Which approach will actually help patients? How many experiments will come up empty handed? Nobody knows the answer yet to these questions – the real issue here is the basic research that is being conducted. There is only one thing that is certain – many more scientists will have to travel through the valley of tears.

Frank Bradke reacts relaxed, amused and rather vaguely when someone asks him when we can count on an actual application for patients. In years? In decades? “Right, exactly.” Bradke then explains how it took him almost 20 years before he was able to produce genuine results in the form of successes.

In the beginning in the context of paraplegia, Bradke just wanted to know why the axons no longer grow – those are the long extensions of nerve cells, through which the signals are transmitted. Because when an axon in the hand, foot or leg is severed, a small cone is formed from which the axon continues to grow – but in the brain and spinal cord this cone represents the completion, without the emergence of any kind of new growth. The reason: so-called microtubules – protein chains that are normally arranged parallel to one another which generate a coordinated advance in growth. Bradke and his staff at the German Center for Neurodegenerative Diseases in Bonn (DZNE) observed that these microtubules in the damaged spinal-cord nerve cells had become completely mixed up. With the aid of the anti-cancer drug Epothilon he was able to stabilise the small tubes – and voila! – the nerve cells began to grow again. He has been conducting research on this since 1998, having recently won the coveted Leibniz Prize of the German Research Foundation (DGF). When he attempts to explain his work to laymen, he falls back on his favourite metaphor of the fearless car driver: “We asked ourselves – what is the motor when nerve cells are growing, and what is the brake? We realised that there were many stop signs and, even when we remove one of them, there are still many others. This is why we are trying to make an axon into a kind of crazy car driver who doesn’t care about the stop signs.”

In this context it would be enough if human beings were a bit more like fish, which are able to continuously produce new nerve cells, even after injuries to the brain. This is why scientists are regularly spending so much time in front of water-filled plastic vats observing two to three centimetre small, black-and-white-striped fish – zebra fish.

Such tanks can also be found in a certain Bayreuth cellar. In this tiled room, bubbling and spluttering like a swimming pool, aquariums are stacked on top of one another in seven rows. “These fish are genetically modified to such a degree that they can no longer produce pigments,” says Georg Welzel, post-doc at the Tierphysiologisches Institut der Universität Bayreuth. The inner organs shimmer with a reddish colour through the skin of the small, transparent fish. Targeted processes can thus be observed inside the living animals. However, the small fish larvae are much more important for this study of the nerve cells. If one wants to produce them, a few females are put together into a container with a few males. The female fish lay 200 to 300 eggs the next morning, and two days later the larvae hatch. The embryonic tissue can now be dissolved into individual cells with the aid of a special fluid. “We can then apply small magnetic balls that adhere only to the nerve cells,” says Welzel and holds up a plastic tube between his thumb and forefinger. The nerve cells are more or less sorted out in this manner. “We get about 500,000 units per tube.” When the cells are placed in a pink-coloured nutrient fluid, we can watch them grow – and find out through experiments what promotes or inhibits their growth, for example.

At the University of Munich 230 kilometres away, Magdalena Götz removes from a safe-like, compact refrigerator a plastic tray with several indentations containing the same light-pink fluid. The female scientist with the precisely-cut bob, places the tray under a microscope, looks into it and says: “Do you see this grey undercoat? Those are glial cells.” Glial cells represent a lifetime topic for Götz. One could say that the cells and the researcher have helped one another to become famous:  At one time glial cells, which surround the human neurons in the brain, were considered to be rather unspectacular “nerve putty.”

Götz observed in an experiment in 1995 what exactly was going on in the cells during the initial stages of brain development. She expected to find neuron precursors and certain glial cells. But what she actually found were only glial cells – and nothing else. “I thought: Either the colouring is wrong – or the concept.” Götz proved – as did other research scientists as well – that it was the existing dogma that was wrong. And she substantiated the fact that all nerve cells were – at one time – glial cells. This seemingly unremarkable nerve putty – it was, in reality, the origin of our nervous system. That was a small revolution. And another one came soon thereafter when Götz was successful in promoting glial-cell growth in the cell-culture dish, thus producing neurons – a major breakthrough. She showed that all that was needed was a mixture of various proteins to stimulate the growth. All that was needed? No, after you listen to Magdalena Götz for a while, you begin to understand that, of course, everything is much more complicated than that.

“It is absolutely crucial that one pursues all approaches. Because different diseases require entirely different therapies”

The energetic and lively scientist relates how, after the euphoria from witnessing the first nerve cells produced in a dish, the disillusionment came – the majority of the neurons died during the transformation process. “We had assumed that it was just a small step from the production of a few nerve cells to many thousands. Actually, we didn’t make any new discoveries for ten years.” Götz experimented again and again with new proteins that she had identified as important for the development of the brain. And the cells continued to die. Until she and her colleagues finally realised two years ago: During the transformation of a Glial nerve cell, a transformation in metabolism also takes place. In nature, a protective mechanism is also formed at the same time, which protects the cell from the oxygen that is produced during the new metabolic process. This protection was missing in the cell-culture dish – causing the neuron to die.

This hurdle has been cleared in the meantime and the transformation takes place without a glitch – that is, with zebra fish and mouse nerve cells. “Now we are taking a look at whether and how the newly-formed neurons from these animals are linking with one another,” says Götz. She conducts research with her team of 30 scientists at the university and at the Helmholtz Centrum München. In the autumn of 2014, she was awarded the Ernst Schering Prize for her work. Götz talks of many things: colleagues who transplant stem-cells with the intention that they would transform themselves in the brain to nerve cells, and of skin cells that are re-programmed and then transplanted as well. And after all of this – the microtubules, glial-cells and stem-cells, discussions concerning axons, proteins and molecules – there are still a number of questions that crop up: Are all of these diverse research approaches justified? How can we know which direction is the correct one? Is this a kind of race in which only one finally achieves the goal?

Magdalena Götz energetically shakes her head at this question. “It is absolutely crucial that all approaches are pursued. This is because different diseases require entirely different therapies.” After a stroke for example, new neurons have to be produced more or less from nothing – this task could be assumed by the glial cells. In the case of paraplegia, conversely, neurons are still in place and just have to be stimulated to grow again, by means of stabilising the microtubules, for example. But Parkinson’s is a different case entirely: The cells die completely, but in a very specific region – transplantation would then make sense.

All of these diseases have primarily one thing in common – the problem is the nerve cells themselves. But that’s where the similarities stop. Basic research concerning the regeneration of neurons is therefore still similar to a huge painting, in which a different working group sits and paints at each corner. Occasionally someone will add a few brush strokes to the other’s work, and sometimes each individual will work on his own. Perhaps an overall completed masterpiece will never emerge. But maybe many small images will arise, each one exciting and meaningful in its own right.