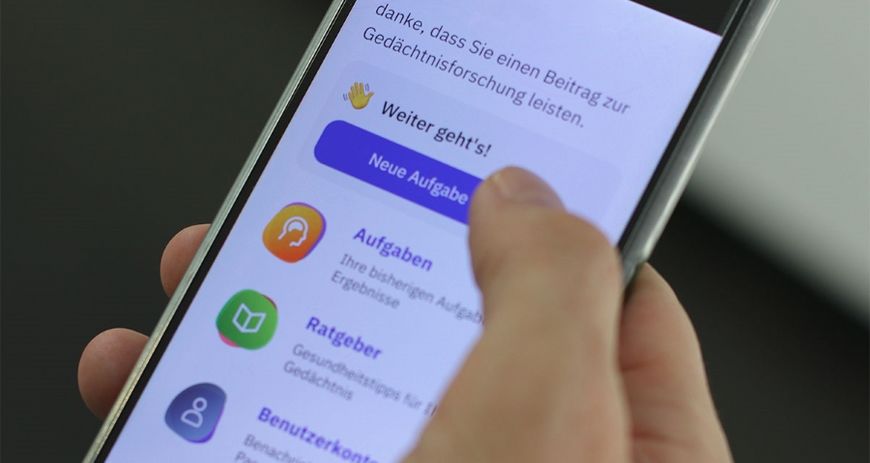 The citizen research project of the DZNE is based on a free app for smartphones and tablets with various memory tests (Image: DZNE).

Is the pandemic affecting our mental fitness?

How does COVID-19 disease alter memory performance? And what role does the psychological stress caused by the pandemic play? Brain researchers want to use an app to investigate possible effects on the brain. Citizens aged 18 and older can participate - even those who do not have COVID-19.

Exhaustion, shortness of breath, loss of smell and taste and, in severe cases, kidney or liver damage - these are possible, previously known consequences of infection with SARS-CoV-2. In the meantime, there are increasing indications that the disease can also have a negative impact on memory performance and the brain. With a long-term study, a team of the German Center for Neurodegenerative Diseases (DZNE) and the Institute for Cognitive Neurology and Dementia Research (IKND) at the University Medical Center Magdeburg wants to get to the bottom of this question. To this end, the researchers are collecting and comparing data from COVID-19 sufferers and healthy people, which all participants provide via a smartphone app.

The project relies on broad citizen participation: Adults aged 18 and older from all over Germany can take part - and regardless of whether or not they have already experienced a COVID-19 disease. The app required for this is free of charge and regularly calls on its users to test their memory - initially weekly, later less frequently. The test procedure includes various playful tasks that take about fifteen minutes in total. For example, the test subjects have to remember the location of objects or recognize whether the photos displayed in the app are indoor or outdoor shots. The tasks specifically test certain brain areas and cognitive abilities.

The research team has already gained experience in other projects. "In an older study, we looked at the effects of a cold on memory function in a very similar way," explains study leader Emrah Düzel, spokesperson for the DZNE site in Magdeburg and director of the IKND at the Medical Faculty of Otto von Guericke University Magdeburg. He said that the combination of the app, for which the researchers are collaborating with the Magdeburg-based startup neotiv, and the participation of the general public can deliver scientifically sound results.

Isolation and lack of exercise can reduce memory performance

"We have now adapted this approach of citizen research, in which as many people as possible of different ages and with and without a previous illness are interviewed, to the Corona pandemic." The goal is to gain a comprehensive impression of people's psychosocial situation and their memory performance in times of the pandemic. This is because not only COVID-19 disease, but also general psychological stress - according to the researchers' theory - can affect mental fitness. That's why they're also studying effects of coping with the pandemic, such as social isolation and contact reduction. "We hypothesize that these limitations may lead to cognitive problems, especially in older people," Düzel elaborates. Lack of exercise, few social contacts and isolation would have strong effects on memory performance, especially among the elderly.

Possible link between loss of smell and memory problems

In addition, the researchers suspect that one of the most prominent symptoms of COVID-19 disease - loss of the ability to smell - is linked to memory problems. "The olfactory nerve is in contact with memory areas, and there is evidence that this may be a gateway for the virus to get to these areas in the brain. That's why this is an additional question we want to pursue."

Ideally, 5,000 participants will be surveyed over two years, of whom between five and ten percent will have experienced an infection. The experts expect initial results as early as the summer, provided that enough people participate. Düzel is optimistic: "You can't ask anyone to go to a clinical center so often and have a cognitive examination over such a long period of time." On a cell phone, however, the test is playful and uncomplicated, and the threshold for participation is correspondingly low.

As the researchers point out, the app does not provide feedback on whether participants do well or poorly on the memory test. Rather, participation is anonymous, with no immediate results or evaluation. "It should always be discussed with a physician what memory impairments mean," Düzel notes, "because they can be of clinically far-reaching significance. We don't want app users to be left alone with potentially problematic results and unable to categorize them." That's why participation should be seen as a service to science, he said. "With our project, we want to contribute to a better understanding of the impact of the disease on the brain. And with their involvement, the participants can help us to understand the consequences of COVID-19 more precisely and learn to deal with them better," the researcher summarizes the added value.