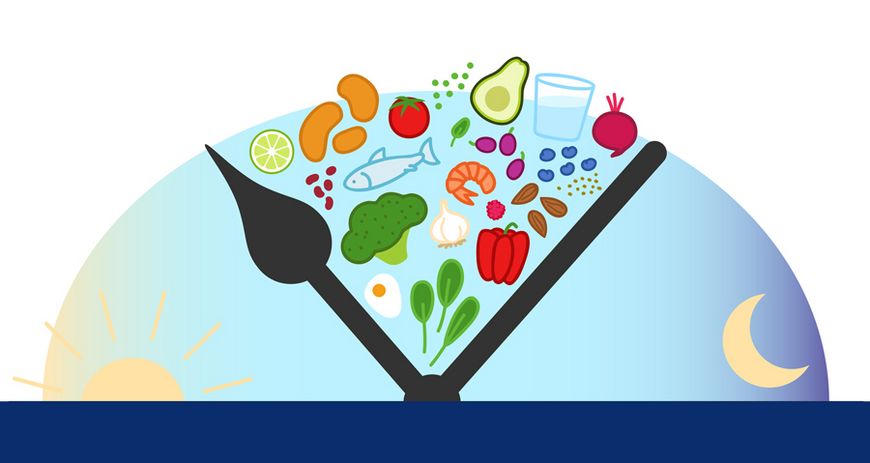 The rule for interval fasting is “eat half the time,” rather than “eat only half.” Image: Rudie/Fotolia

Interval fasting—does it really live up to the hype?

Therapeutic fasting traditionally involves going without food for several days. In the case of intermittent fasting, on the other hand, taking regular breaks from eating is sufficient. But is this approach really effective in terms of the participants’ weight and metabolism? And what does science have to say about it?

Therapeutic fasting traditionally involves going without food for several days. In the case of intermittent fasting, on the other hand, taking regular breaks from eating is sufficient. But is this approach really effective in terms of the participants’ weight and metabolism? And what does science have to say about it?For many people, a new year typically means making resolutions. Losing weight is one of the most popular goals, and there’s no shortage of opportunities to do so, as dieting strategies abound. However, these often call for giving up certain types of foods—an approach that’s unrealistic for many over the long term. Interval fasting represents a different way of tackling body fat. It’s different from dieting in that it doesn’t focus on changing what you eat, but rather simply delaying when you eat and taking longer, regular breaks from eating.

Anna Engler discovered this trend for herself and has already lost over 30 pounds. She has been fasting using the 16:8 method for a year now, which involves going without solid food for 16 hours while drinking only black coffee, tea, and water. Eating is allowed during the remaining eight hours of the day. “I don't even have to skip pizza or Turkish borek, which are my favorites,” says the Berlin resident. Engler takes a break from eating starting at dinnertime until lunch the following day. She says she finds this rhythm easy to maintain, as she never particularly liked eating breakfast anyway.

For a long time, Engler struggled with low motivation, a lack of discipline, and excessive weight. The 32-year-old was significantly overweight, but didn’t have any appetite for diets. “I always thought they were pointless, because you gain back anything you’ve lost right away,” she says. “This seems to be a method that is relatively easy to integrate into your day-to-day life without causing a lot of upheaval,” says Stephan Herzig, commenting on interval fasting. Herzig heads up the Institute for Diabetes and Cancer at the Helmholtz-Zentrum München, and he and his team conduct research into the ways that temporary fasting affects metabolism. Interval fasting has many other positive effects in addition to helping people lose weight. “It makes insulin more effective again, for example. Plus, it lowers blood pressure, prevents cardiovascular disease over the long term, and also supports cancer treatment,” Herzig notes. Together with his team, the researcher is currently exploring the question of how fasting can be used for therapeutic purposes and how drugs that imitate fasting can be developed.

But what actually happens when people fast? “The body needs to ensure that the organs and especially the brain are still supplied with energy even during periods of hunger,” Herzig explains. When a person fasts, their body switches from metabolizing sugar to metabolizing fat. This means that once carbohydrates are used up, the body begins to burn its reserves of fat—so fat deposits shrink. “When fasting is continued for an extended period, the protein reserves in the muscles are also used as energy,” says the biologist. The metabolites then end up in the liver, which uses them to produce sugar so it can be supplied to the brain.

“The processes that occur in the individual cells depend on the type of cell,” Herzig says. However, he notes that autophagy—our internal waste removal process—is activated throughout the entire body during fasting. “Defective or damaged molecules are broken down or obliterated. It’s a type of detoxification,” he says.

Researchers at the German Institute of Human Nutrition Potsdam-Rehbrücke have demonstrated how controlled fasting impacts metabolism in studies on mice: “They are able to switch back and forth between metabolizing sugar and fat much more effectively, and the metabolism of fat is improved overall,” says Annette Schürmann, Head of the Department for Experimental Diabetology. In addition, fewer toxic intermediate products of fat metabolism are collected in the mice’s livers.

“Plus, the mice redevelop a greater sensitivity to the hormone insulin, which controls sugar levels. This helps to prevent type 2 diabetes,” Schürmann adds. She notes that insulin resistance in obese mice who had already developed this condition was reversed by fasting. “The metabolism of mice is ideal for comparing with the human metabolism, which makes it possible to transfer these findings to humans,” the researcher says.

“A huge number of very impressive studies have already been carried out on animals.” According to Andreas Michalsen, Chief Physician at the Immanuel Krankenhaus Berlin hospital, studies have also suggested that fasting offers protection against dementia, for example. However, it’s unclear whether it would have as many positive effects on humans, he says. “Large, long-term studies still need to be carried out on humans. But the fact that changing the clock is effective has been proven by research,” the doctor notes. According to Michalsen, Immanuel Hospital cares for some 1,500 individuals who fast annually. He himself works with around 500 people who fast in intervals each year.

According to Munich-based researcher Herzig, other studies have also shown that fasting increases memory capacity. He says that people are also much more agile on the whole during periods of hunger. “The urge to move is increased, which is something we needed to survive during the Stone Age,” the researcher says. He explains that food was very scarce back then and was only available at irregular intervals. “People were constantly on the search for something to eat. Interval fasting essentially reactivates a genetic program that is only rarely needed today due to the surplus of food available to us. In metabolic terms, fasting helps us return to the condition we were in long ago,” Herzig says in summary.

“Eat half the time” instead of “eat only half”

However, Anna Engler admits that fasting can also be hard work: “I've felt dizzy sometimes. But it was very liberating to realize that nothing really terrible would happen to me if I was hungry for a couple of hours,” she says. At the same time, she didn’t even choose the most difficult version: “Real” interval fasting involves going without food for a day and then eating for a day—and alternating days on a continual basis. Another form is the 5:2 method. People using this approach eat as they normally would for five days a week and only consume around 500 calories on the other two days. Doctor and entertainer Eckart von Hirschhausen has summed up the principal behind interval fasting in very simple terms: “You count hours rather than calories. And you don’t ‘eat only half,’ you ‘eat half the time!’” He says that fasting also helped him lose over 20 pounds.

However, not everyone finds it easy to get through periods of fasting. Andreas Michalsen has seen this time and time again. “Ninety percent of people think it’s great. But it doesn’t work well for the other ten percent. And I tell these patients, ‘Please don’t continue,’” Michalsen says. “I advise the patients to try it out for themselves and find a rhythm that works for them,” says the doctor, who skips breakfast himself. Stephan Herzig says that skipping dinner would be even better for our metabolisms. “This is because metabolism is linked to the body’s internal clock, and the body processes food even better in the morning than it does in the evening,” the expert says. However, he continues, many people find this more difficult to put into practice. And he says that changing our eating times only makes sense if we continue to do so over the long term.

Lack of studies on the long-term effect

However, interval fasting doesn’t just have its advocates. The German Nutrition Society (DGE) does not deem this approach suitable for controlling weight for extended periods. Its reasoning is that interval fasting lacks specific recommendations for selecting foods. Furthermore, the DGE asserts that there is currently a lack of studies on the long-term effects of interval fasting. In the course of a clinical study involving 150 participants, researchers at the German Cancer Research Center and Heidelberg University Hospital have now demonstrated that neither euphoric expectations nor rejection are justified responses to interval fasting. “Interval fasting is just as effective as normal diets that cut calories when it comes to metabolism and losing weight,” says the study’s senior scientist, Tilman Kühn. He notes that research carried out by two groups in Norway and Australia recently achieved similar results.

During the study carried out in Heidelberg, a group of subjects fasted according to the 5:2 principle and consumed a total of 20 percent fewer calories each week. Another group consumed 20 percent fewer calories each day. And a control group ate without following any specific diet plan. “The subjects who participated in interval fasting and those in the group that dieted both lost weight. Unhealthy abdominal fat decreased in all of the participants, and liver fat was reduced. Furthermore, their sensitivity to insulin increased again,” Kühn reports.

But he says that researchers still need to examine whether the results are valid for other methods of fasting, such as 16:8. The researcher also wants to determine which type of diet is suitable for which groups of individuals in particular. The participants’ progress varied significantly after the end of the study. “Some continued to lose weight, while others gained it back again. There were a wide variety of outcomes,” Kühn says. “Interval fasting may be particularly suitable for those who work, or perhaps for retirees as well. That’s what we want to find out,” the researcher says. But ultimately, Kühn notes, the most important factor is sticking to it, regardless of which method is used to lose weight. “Maintaining a healthy weight over the long term also requires that the individual make permanent changes in their eating habits and consume a balanced diet as per the recommendations of the DGE,” Kühn advises.

Anna Engler is convinced she’s found the right approach. At five feet, five inches tall, her goal is to weigh 150 pounds again and wear size 38 clothing: “I only have 13 pounds to go.” Engler says the fact that she only fasts four days a week has made it relatively easy to stick to this method for an extended period. From a researcher’s perspective, seven days a week would naturally be ideal. “But taking longer breaks from eating on four days is much better than none at all,” says Stephan Herzig. And for those who are interested in learning about fasting, a wide range of information is available in bookstores, or online as well—including Facebook groups focused on interval fasting. These groups have thousands of members who motivate each other by sharing their success stories.