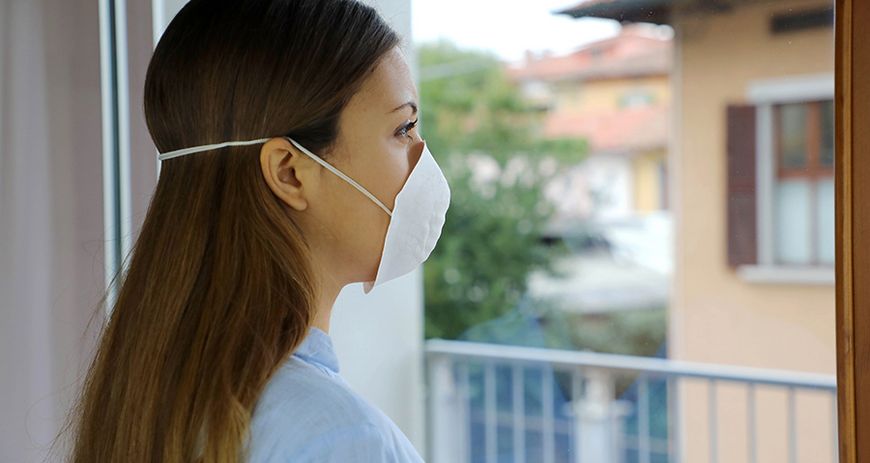 How does the lockdown affect mental health?

The lockdown in spring changed the well-being of the Germans: Stress, fear and depressive symptoms increased. This is shown by the results of the NAKO health study. A conversation with the head of the study, Annette Peters from Helmholtz Zentrum München.

Ms. Peters, you have conducted one of the most comprehensive studies in the world on how the pandemic and protective measures such as the lockdown will affect the psyche and well-being of people. What did you find out?

There are a number of interesting results. Some of them were to be expected. For example, stress levels have increased across the board for all ages and both sexes. On a scale of one to ten, it has risen on average by about one point from about three and a half to four to five, or almost a third. What was surprising, however, was that the pandemic and the lockdown can have very different effects on the psyche, depending on how old you are.

I already said that stress increased at every age. But when it came to anxiety and depressive symptoms, there was basically no change in people over 60, of all people. This may be due to their life experience: at an advanced age, you not only experienced a lot, but you can also cope with unusual situations a little better.

So fears and depressive symptoms have increased among younger people?

Yes, significantly - this applies to people between 20 and the end of 40. Mental health has deteriorated, especially among younger women up to the end of 30. This could be due to the multiple exposure of working women with children: In the lockdown, the children were suddenly at home and needed time and attention. At the same time, many working women suddenly had to perform at work in their home office, and then there was also the risk of infection. Here the older ones perhaps had another advantage: they were not as challenged as young families and working people. They could concentrate more on protecting themselves.

Are these temporary burdens that disappear again or do many younger people need to be medicated for anxiety disorders and depression over a longer period of time?

Fortunately, most increases in anxiety and depressive symptoms have remained in the pre-clinical range. In other words, many people have become more anxious and have had mild depressive episodes, but all to an extent that does not require treatment. However, the frequency of severe symptoms requiring treatment has also increased: from 6.4 percent to 8.8 percent. We cannot say whether this trend will reverse and everything will be the same as before. Perhaps the anxiety and depressive symptoms of many of those surveyed have since receded again. We conducted our survey in May and in it we look at the effects of the lockdown in spring.

A lockdown has effects on the psyche of people.

In the NAKO health study, you actually shed light on the development of diseases such as cancer, diabetes, heart attack, in order to improve their prevention and treatment. Now you are also investigating the effects of COVID-19. How did this come about?

We had to close our study centers, where we examine the test persons, in the middle of March. We were not prepared to study and interview people under pandemic conditions. At the end of April, we sent out questionnaires asking about their life situation and mental health. 113,000 people completed and returned the questionnaires in the first 30 days. The survey was a first contribution by NAKO to better understand the pandemic and its effects. We also asked whether people had already contracted COVID-19 and whether they had ever been tested. 344 people were already ill, four percent of the participants, more than 5,000, had already been tested.

What effect did the testing have on the stress level?

The test was accompanied by greater perceived uncertainty and stress. However, we do not know whether the test itself stressed people or the fear of being infected. At that time, testing was mainly done when one was at risk. I think testing is now widespread and, on the contrary, can provide certainty.

Does the pandemic also have positive effects? Did you find out anything about this in your survey?

We also asked for an assessment of your general state of health, i.e. how you feel physically. And indeed, 32 percent of the participants in the study rated their state of health better - even though stress actually increased. We suspect that this has something to do with the deceleration that the lockdown also brought about. Some people had more time, many started to exercise or do sports more and paid more attention to their health.

We are currently in a second lockdown, a kind of "lockdown light". What can we learn from the results of your survey? What is important to keep people in this situation mentally healthy?

There is no specific recipe for this, partly because people and their life situations are very multifaceted, differentiated and complex. Our survey initially provided important insights: a lockdown has an impact on people's psyche. Politicians must bear this in mind when making such decisions. That is why there should be broad-based offers of help in such a phase. These include preventive offers in the health sector, such as hotlines where people can turn to when they are lonely. And then our study also brought the certainty that the stress in the pandemic has increased for everyone. To realize this alone could help many people, it is a certain consolation: You are not alone with your worries and problems.

The NAKO Health Study (NAKO for short) is the nationwide health study that was launched in 2014. The aim is to gain a better understanding of the development of diseases such as cancer, diabetes, heart attack and others in order to improve prevention, early detection and treatment in Germany.

The NAKO is the only Germany-wide cohort study in which current data on health in Germany immediately before and at the beginning of the coronavirus pandemic are available. By summer 2019, more than 205,000 Germans had been examined. In May 2020, the study directors asked the test persons how their state of health had changed during the corona crisis. The results of the first 113,928 participants have now been published in the German Medical Journal.