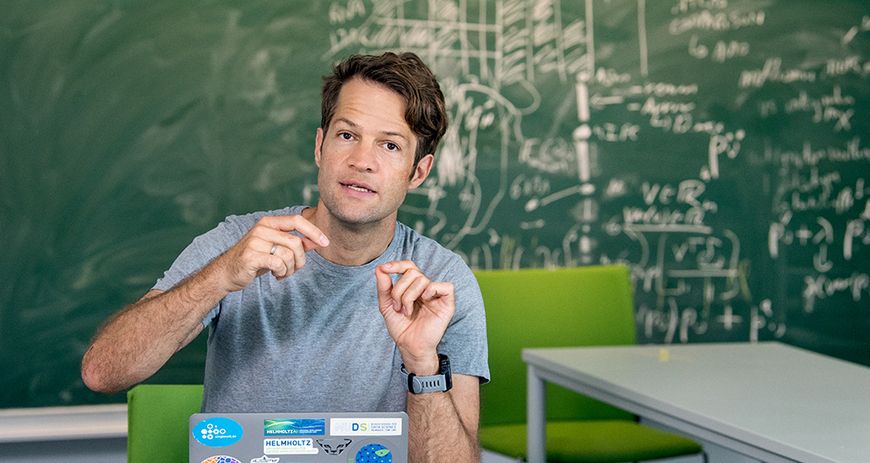 Fabian Theis uses artificial intelligence to unlock the secrets of human cells. In the Corona Pandemic, he was able to help decipher how viruses work in the body.

He hasn't put away the mattress yet, it is lying on the floor a few steps away from the desk. "This is still a leftover from the vacation," says Fabian Theis: "We cycled with the children along the Danube as far as the Black Forest. The camping vacation meant a few days of deceleration for the mathematician and physicist, who usually moves at a rapid pace in his research: At the age of 26 he received his doctorate in physics, one year later in computer science, at 32 he habilitated and now, at 44, he is Director of the Institute of Computational Biology at Helmholtz Zentrum München and Professor of Biomathematics at TU München.
Perhaps it was the desire to slow down in view of this rapid pace that led him to have the house for his family built entirely of wood.

Digital transformation and artificial intelligence (AI) will change our world and science. In view of the German EU Council Presidency, we want to discuss research and innovation activities in this area. How can we avoid working in silos and overcome the limitations of current digital technologies in terms of capacity, speed and energy consumption? Fabian Theis will discuss the AI of the future at our event "AI in the green digital ERA" - be there live on November 10, 2020 at 2 pm on www.helmholtz.de.

It is located in Garching, on the outskirts of Munich and in a strategic position between its tasks at the center and the Technical University. "We wanted the wood to be visible as well," says Fabian Theis about the large beams that he and his wife and four children can see everywhere in the house. The wood, this down-to-earth material, is in stark contrast to the high-tech triad of artificial intelligence, machine and deep learning methods that dominates his research.

In his research group, Fabian Theis has gathered together a large number of biologists in addition to other computer scientists and physicists. The team works in a highly complex borderline area: the researchers collect many millions of pieces of information from human cells, which they examine using algorithms. How do the cells interact and what goes wrong with diseases on the cellular level? What is special about this is that these investigations are carried out at the level of individual cells - previously, cell analysis was based on averages of several cells. "In the past you had a smoothie", Fabian Theis illustrates the difference between the two approaches, "now we see the fruit salad it was made from". The technique that enables the much more precise view is called single cell sequencing. About five years ago, researchers succeeded in breaking down the biological basis of five cells in such detail; today, thanks to improved technology, this works without problems with one million cells. In each of them, 20,000 genes are analyzed - "a clear case of Big Data," says Fabian Theis.

There is a side effect to this work at the peak of what is technically possible for him: he is constantly invited to give lectures in which he is asked to talk about his work - often to scientists, but also to laypeople who look forward to a look behind the scenes of research. He then stands on stage, slim and tall, his hair curly-tousled, and tries to explain the abstract concepts from research with a wink. "Big Data," he likes to say, for example, "is everything that breaks up an Excel spreadsheet." He is about to listen a little to his Bavarian way of speaking; he grew up in the Upper Palatinate. "I don't really have a strong dialect," he says himself - "my children always laugh at me when I try to sing a Bavarian song!

Now, during the Corona period, it has become clear that Fabian Theis' methods also help in the fight against the pandemic. He has long been involved in the international project of the "Human Cell Atlas", in which all human cells and tissues are to be mapped - and his team is responsible for the lungs of all things. "In February we realized This gives us a great basis for participating in corona research," says Fabian Theis. His research group investigated why the virus does not affect all people equally - why men are more susceptible than women, why more smokers fall ill and fewer children. The researchers looked at the data sets of various patients and were actually only able to find a possible molecular explanation based on the data analysis. "The genes that contain the blueprint for two specific proteins are more active in the affected individuals. One of them is a receptor to which SARS-CoV-2 docks. This makes it easier for the virus to enter the cells and infection is more likely to occur".

That Fabian Theis would end up with his research so close to medicine was at first unlikely. "I was the black sheep in our family," he says and laughs: He grew up with two siblings near Amberg in the north of Bavaria, his parents are both doctors, his sister has since taken over his parents' practice, and his brother is a psychotherapist. Only Fabian was always more interested in mathematics than in medicine. He wanted a computer for his First Communion in the third grade; at a time when computers were not very common in households. "But then I quickly realized that there was almost nothing I could do with the device," says Fabian Theis today, "so I tried programming myself.

From that moment on, it was a little more than ten years before he began his studies. He enrolled for physics and mathematics in Regensburg, which was the closest university from his home. During his doctoral thesis in physics, he attended his first scientific conference in Granada, Spain. "I had no idea how things were going there and was totally nervous. My PhD supervisor finally introduced me to his Spanish cooperation partner," says Fabian Theis. Despite all his retrospective modesty, he must have made an impression: Only one year after his doctorate in physics in Regensburg, he completed his doctoral thesis in computer science in Granada. He then continued his research at two Japanese universities and in the USA before finally going to the Max Planck Institute for Dynamics and Self-Organization in Göttingen and finally to Helmholtz Zentrum München.

But how did he get into medicine, of all places, when Big Data is such a broad subject? Fabian Theis laughs. "Yes, I was actually involved in a project where they tried to understand how dollar bills travel around the world. And you can also analyze the flow of goods between countries and the like with Big Data. But there was something else about biology that appealed to him: unpredictability. "If I throw a ball, I can calculate its trajectory in physics to an exact formula. This kind of modeling never works for a biological problem."

And there is another thing that fascinates him about medical research: sheer speed. "I have never encountered such a fast field before," says Fabian Theis, "not even computer technology is making such rapid progress. He recalls the Human Genome Project, where it took more than a decade and cost several million dollars to decipher the human genome - "today it can be done in a week and for a few hundred dollars". This has had a huge impact on his research, in which he relies on gene analysis. When Fabian Theis talks about it, however, he does not sound intimidated at all by the rapid pace of change. On the contrary: he tells with audible fascination. "This is really cool for us," he shouts.

For him, every further technical advance is like a flashlight with which he can shine into ever new and unexplored corners of the cells with his Big Data methods.

The ELLIS (European Laboratory for Learning and Intelligent Systems) initiative aims to create a diverse European network that promotes research excellence and drives breakthroughs in AI. Rather than creating a virtual network between institutions, ELLIS aims to create new working environments for researchers and enable them to combine cutting-edge research with start-ups and industrial applications.

ELLIS was officially launched in September 2020 - with 30 units at research institutions throughout Europe, including Helmholtz Zentrum München and TU München. Fabian Theis is Co-Director at the Munich location.