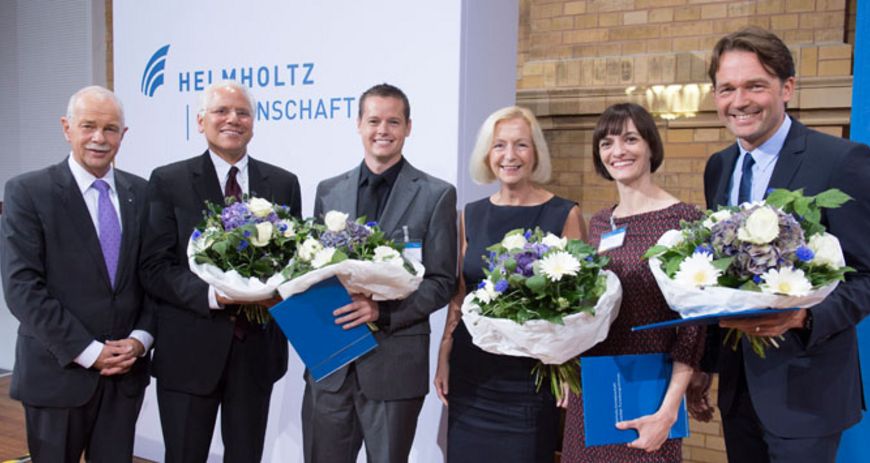 Researchers have developed a hormonal substance that lowers blood sugar, slims people down and improves the fat metabolism. This opens up new treatment options for type 2 diabetes and obesity. They were now awarded the Erwin Schrödinger Prize for their scientific endeavour

End of last year, Peña Nieto felt he had to act: "Confronted with a veritable epidemic of excess weight and obesity, we cannot simply turn our head", said the Mexican President and prescribed his citizens a governmental diet: since the beginning of this year, sweet, calorie-rich foodstuffs are subject to an additional eight per cent tax in Mexico. A necessary measure, for a third of the Mexican population is obese and almost every tenth adult suffers from diabetes.

What has reached worrying levels in Mexico is a global problem. Excess weight and lack of exercise result in a frightening increase in diabetes cases. Today, 347 million people worldwide suffer from diabetes; the World Health Organisation estimates that the death rate due to diabetes will almost double between 2005 and 2030.

A healthier lifestyle and improved diet could help. Yet on the one hand, the information campaigns often fail to engage the population. On the other, it is becoming increasingly obvious that the genetic disposition plays a major role as well. This is why researchers intensively work on finding methods for combating diabetes and reducing weight. A team of chemists, pharmacists, hormone and cancer researchers around Matthias Tschöp from the Helmholtz Zentrum München and the TU München now have made a huge step forward. The scientists have developed a hitherto unique hybrid molecule that in many respects has proven effective against diabetes in experimental tests. The substance lowered the blood sugar levels of laboratory animals, induced loss of weight in them by decreasing their feeling of hunger and at the same time improved their fat metabolism. Moreover, first tests on humans reveal that the substance is extraordinarily well-tolerated. The scientists now have been honoured with the Erwin Schrödinger Prize for their work.

To conduct their experiments, the researchers have used two long familiar hormones. It has been known since the 1970s that the hormones GIP and GLP-1, which are produced in the intestinal mucosa, act as signal substances to regulate blood sugar levels. Drugs based on GLP-1 have already been used for treatment for several years. "However, earlier studies usually limited themselves to prolonging the effect of these drugs", says award winner Brian Finan from the Helmholtz Zentrum München. "We took a different route and added a component to our hybrid molecule that increases the activity at the GIP receptor and elsewhere. To our great surprise, this not only had a considerable effect on the blood sugar level, but it also significantly lowered body weight." A decisive progress, for excess weight is considered an essential risk factor in the development of type 2 diabetes.

To get to this stage, however, some "construction work" was necessary. Taking several years of work, the researchers skilfully inserted peptide sequences into the basic structure of the glucagon hormone so that the GLP-1 and GIP receptors were stimulated with the utmost precision in the experimental cell cultures. At the same time, the aim was to switch off glucagon action, because it causes the exact opposite of the desired effect: it increases the blood sugar level. "These days, the pure manufacture of such a molecule is rather easy", says pharmacologist Finan. "The trick is to arrive at precisely the design that achieves the desired effect." The researchers have demonstrated in several experiments that they have achieved this to an outstanding manner.

After the team of researchers had proven that the hybrid molecule excellently docks onto the GLP-1 and GIP receptors, the task was to put the molecule to the test. How would the substance affect a living organism? At first, the researchers tested the hormone combination on greatly obese mice; the animals had previously been allowed to gorge themselves on high-calorie food for four months. Being injected with sugar, they now were hardly able to process the sweet inflow: their blood sugar concentration rose extremely within 15 minutes. But not so in the animals, which had previously been given the hybrid molecule: their blood sugar level remained stable! Moreover, the substance worked like a diet pill on the animals. The rodents displayed less appetite and lost 14 per cent of their body weight within one week. This is far more than can be achieved with the currently used diabetes drugs, which the researchers gave to a control group of other mice.

From mice to men

The Munich scientists have pushed forward their tests to an extraordinarily advanced stage. Whereas many biological studies often stop at the "mouse stage" for the time being, the researchers have already made the step to application in humans. "This is due to the fantastic circumstance of our team being comprised of chemists, biologists, university researchers and colleagues from the industry", says Finan. The first tests on humans revealed the same results: the new active agent significantly improved the ability of the test persons' organisms to absorb the impact of an acute influx of sugar. Likewise, the blood sugar concentration that is generally increased in diabetes patients was significantly lowered within six weeks, while there were hardly any complaints about nausea, vomiting or dizziness.

"Combining both hormones is a very elegant method", emphasises Hans Hauner, Director of the Else Kröner-Fresenius Center for Nutritional Medicine. "Specifically with regards to obesity, we have been working for 50 years on changing people's lifestyles. Yet because that is difficult to achieve, we want drugs to support this endeavour." Precisely because the genetic influences are so strong, it would be too easy to say that the sole responsibility is with the people who pursue an unhealthy diet. "Rather, we need a mix: from biomedicine to laws that make it easier to pursue a healthy diet." As yet, however, it is too early to say whether the new results will stand the test of clinical studies, Hauner adds – a view that is shared by Finan: "Clinical studies can take many years. But the first batch of data is very promising."