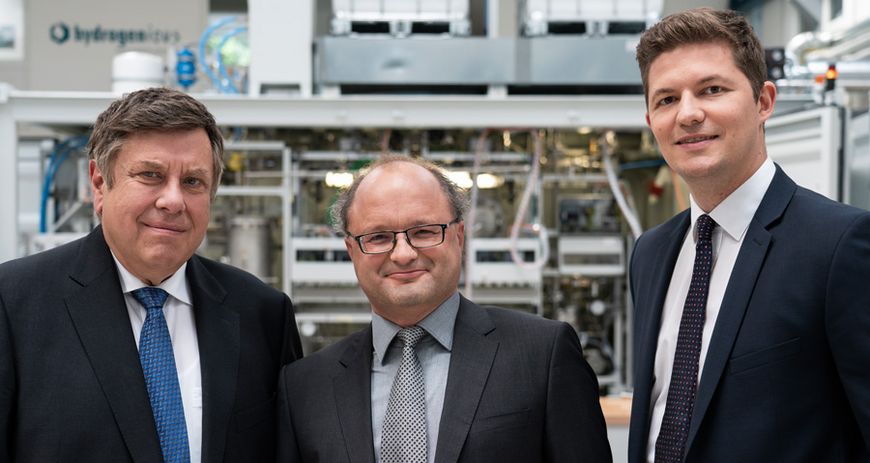 To master the energy revolution, we also need new types of storage systems. Researchers from Erlangen have developed a technology with which liquid hydrogen can be transported in today's infrastructure and reused hundreds of times. For this they have been nominated for the German Future Prize 2018.

The energy turnaround is falling short of its objectives. In the electricity sector, 31.6 percent already comes from renewable energy sources, but the share in other areas is stagnating at a low level. In the transport sector it is 5.2 percent, in the heating sector almost 13 percent. In principle, energy from wind or sunlight is available in abundance - but not always when it is needed. In addition, many sparsely populated regions offer good conditions for the construction of high-yield wind or solar power plants, but their electricity is needed in conurbations. What is needed is an energy storage system that can also be transported. Three researchers from Erlangen, including Peter Wasserscheid, Director at the Helmholtz Institute Erlangen-Nuremberg for Renewable Energy (HI ERN), have developed a solution that could close the gap. It uses hydrogen, chemically bonded to a carrier liquid. This allows the gas to be stored and transported in today's fuel infrastructure. The scientists were nominated for the German Future Prize 2018.

As an energy storage medium, hydrogen has long been the focus of science. Gaseous under normal conditions, the element can be produced by electrolysis of water with electricity. A large part of the electrical energy is converted into chemical energy in the process. The energy stored in the hydrogen can thus be easily recovered when needed. A fuel cell, for example, uses it to produce electricity and water as a by-product. No carbon dioxide (CO2) is produced in either direction of this transformation. However, since hydrogen has only a low energy density per volume under normal conditions, the gas must be pressurized to 700 bar for storage and transport or liquefied at temperatures below minus 250 degrees Celsius. Both methods are technically complex and expensive. The nominated scientists have developed an alternative for this.

"We were looking for a carrier liquid to safely store regeneratively produced hydrogen," explains Wasserscheid. "In dibenzyltoluene, we found a substance that is industrially known for its high stability and non-toxic properties and is excellently suited as a liquid hydrogen carrier." The substance is known for its high stability and non-toxic properties. Dibenzyltoluene is obtained from toluene, which is currently burned in large quantities as a petrol component. In order to be able to store hydrogen, the team has developed the necessary catalysts, apparatus and processes in addition to the material concept. The team demonstrated the feasibility of this technology in test plants and brought it to market maturity. "The principle is similar to filling and emptying a returnable bottle, which is then ready for the next storage cycle," says Wasserscheid. "The liquid hydrogen carrier is not consumed in the storage cycle, but can be reused several hundred times."

The technology has the potential to be used practically on a large scale. "In the future, hydrogen technologies will be particularly suitable as an alternative to diesel engines," emphasizes Wasserscheid. "On longer distances or in continuous operation, where problems arise with the electric mobility charged at the plug, hydrogen-powered electric mobility can do a lot". In order to develop, build and market concrete applications with liquid hydrogen carriers, the researchers founded Hydrogenious Technologies GmbH in 2013. "Several systems are already successfully in use," says the scientist. "In the medium term, ships, trains, trucks and buses are to use LOHC-bound hydrogen directly as an emission-free fuel." Liquid hydrogen carriers can also make an important contribution to global trade in renewable energy. As the technology is only dependent on the existing infrastructure of tankers, tank farms and filling stations, it can be used anywhere in the world, an enormous advantage when it comes to slowing down global climate change.