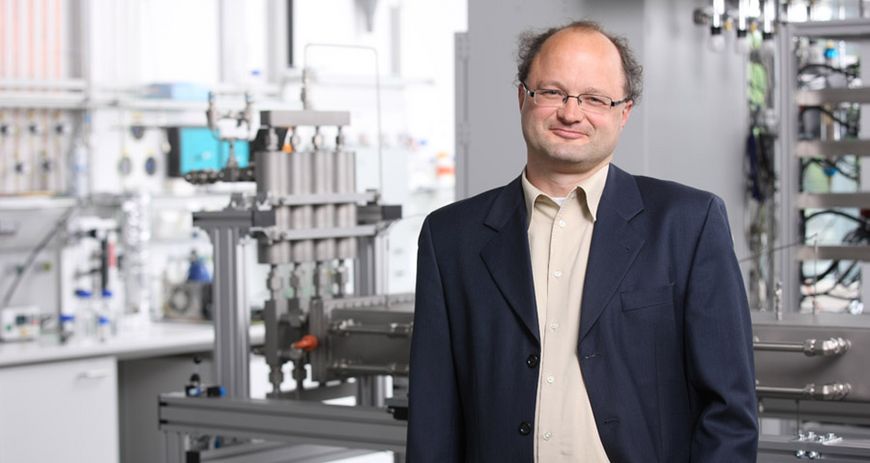 Peter Wasserscheid is working on technical solutions that are urgently needed for the success of the energy turnaround. This has earned him a number of research awards and led to the establishment of a company. He has remained true to his home country.

There is a story for each of the objects that Peter Wasserscheid has lined up on his desk. The bottle, for example, whose contents look like gray flakes: "This is a catalyst that we developed here and which is now used in several large-scale plants," he says, adding with a smile as he looks at the exhibit: "It looks so modest, but there are years of work behind the development! The models of the innovations that he and his team have produced in recent years are neatly lined up in front of him, and this first impression alone makes it clear that there is a lot going on in his field of research, chemical reaction engineering.

"It has always been important to me that if my research is successful, it also has a social value"

Since 2003, the 48-year-old has held his chair at the Friedrich-Alexander University of Erlangen-Nuremberg. He was only 32 when he was appointed professor - and has since then helped shape the many changes in his field of research. "In the beginning, our research activities were still strongly focused on classic petrochemistry, refinery technology and the large-volume intermediates of the chemical industry," he says in retrospect. This has changed considerably over the past ten years; since then, topics related to the energy turnaround, such as chemical energy storage, have been the focus of attention. "It has always been important to me that if my research is successful, it also has a social value," says Wasserscheid.

Since 2013, he has headed the Helmholtz Institute Erlangen-Nuremberg for Renewable Energy (HI ERN), initially as founding director, and since 2015 as director together with Karl Mayrhofer. It was the Erlangen Cluster of Excellence "Engineering of Advanced Materials", which attracted the Helmholtz Institute to Erlangen with its research activities in the overlap area between materials science, process engineering, chemistry and physics - "these scientific fields are of great importance for the development of new technologies for the energy turnaround", says Peter Wasserscheid. The decision of Forschungszentrum Jülich and Helmholtz Zentrum Berlin to establish the Helmholtz Institute for Renewable Energy in Franconia was a great opportunity for him, he sums up. The Franconian dialect is not his own. "My parents are not from here, so the dialect is not so strong in my case," he says: "But I am insanely Franconian! Born in Lower Franconia, grown up in Upper Franconia, and then after twelve years of studies, doctorate and habilitation in Aachen, now working in Middle Franconia - "there I know the Franconian soul from all perspectives," he says laughing. Only when it comes to soccer, he doesn't remain loyal to his Bavarian homeland: he is an avowed Borussia Dortmund fan.

Peter Wasserscheid can determine exactly when he found his way to chemistry and later to chemical engineering, "almost to the day", he adds: In 1990, as a schoolboy, he became a national winner at "Jugend Forscht", he developed a decomposable plastic. Discussions with experts who were curious about his ideas - they were exhilarating, he recalls. And they led directly afterwards to his decision to study chemistry. When he approached his professor in Technical Chemistry a few years later about the upcoming diploma thesis, he had a tricky task for his ambitious student: "I heard about something that seemed strange to me, but if there was something behind it, it would be a highly interesting new option for multiphase catalysis" - with these words the professor persuaded the student to take up ionic liquids.

It is a topic that Peter Wasserscheid is still concerned with today and for which his group is now considered a world leader. "Ionic liquids are salts which, like common salt, are composed of positively and negatively charged particles," he explains. "But while common salt only melts at over 800 degrees, ionic liquids are already liquid at room temperature due to their special structure. They are hardly inflammable, dissolve organometallic catalysts well and are electrically conductive. This makes them highly sought-after for technical applications - "they can be used in sensors, but also in compressors or chemical production processes," says Peter Wasserscheid. He was awarded the Gottfried Wilhelm Leibniz Prize in 2006 for his research in this field, and he also received an Advanced Grant from the European Research Council twice in a row.

In addition to ionic liquids, he is working on various technical possibilities for storing hydrogen in organic compounds. With the "Liquid Organic Hydrogen Carrier (LOHC)" technology, which he and his Erlangen colleagues played a major role in developing, it is possible to store hydrogen efficiently, safely and cheaply. In addition to the substance concepts, the team has developed the necessary catalysts, apparatus and processes. It has demonstrated industrial feasibility in test facilities and brought the technology to market maturity via the spin-off company "Hydrogenious LOHC technologies". The young company already has 70 employees. "The principle is similar to filling and emptying a returnable bottle, which is then available again for the next storage cycle," says Wasserscheid. "The liquid hydrogen carrier is not consumed in the storage cycle, but can be reused several hundred times." One goal, says Peter Wasserscheid, he and his team would like to achieve: He wants to make a contribution to the development of energy technologies that do not produce fossil CO2 emissions and can be used worldwide because they make use of the existing infrastructure for fuels. "Whether the technologies we develop here make a decisive contribution or only find niche applications is not so decisive," he says. And then he repeats the sentence with which he regularly spurs his team on and which reveals much about his sporting spirit: "The better our ideas and developments are, the better any solution must be that can displace our concepts in the competition!