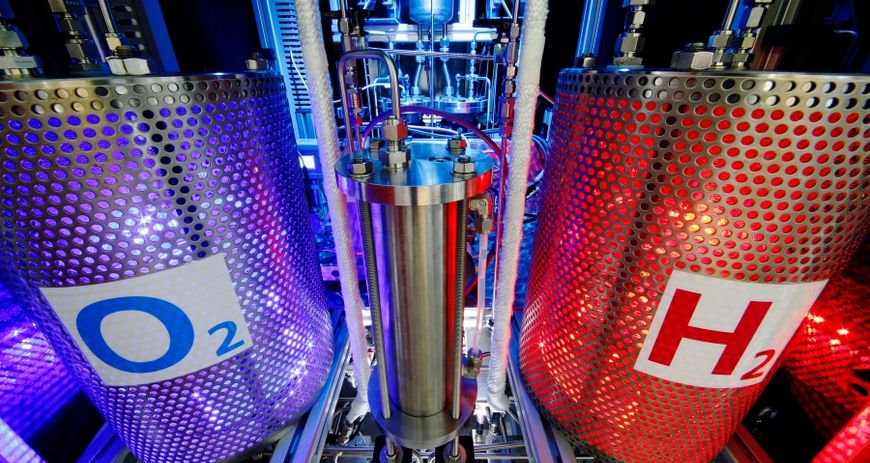 In electrolysis, water is split into oxygen and hydrogen. Picture: DLR / Ernsting

Hydrogen is regarded as the central energy carrier of the future. Renewably produced, it can make an important contribution to climate protection and replace fossil fuels. To do so, the lightest of all elements must be produced in an environmentally friendly, safe and affordable way. "The only truly sustainable source of hydrogen is water," says Marcel Risch of Helmholtz-Zentrum Berlin (HZB). Together with his team, he is working to further improve the established process of water electrolysis - the chemical splitting of water into hydrogen and oxygen.

This process requires electrical energy. It is supplied to the water via two electrodes. At one electrode, the water is split into its components hydrogen and oxygen; the oxygen rises to the top. The hydrogen ions on the other hand migrate to the other electrode. There they can be converted either into gaseous hydrogen or into hydrocarbons and ammonia, which serve as energy carriers and industrial raw materials. "The first step in producing these products - splitting up water - is not yet so well understood," explains Marcel Risch. "This reaction is the actual heart of electrolysis and still has a lot of potential for optimization."

The "hiking map of catalysis"

This is exactly what the researchers want to change. To this end, they are looking for new electrode materials that serve as catalysts and not only make the process more efficient, but are also more frequent and cheaper than the precious metals that have been frequently used up to now. Marcel Risch is particularly interested in a project for which he came to the HZB a year ago with an ERC grant as funding: the "Wandering Map of Catalysis". "I got the idea for this during a hike through the Harz Mountains," he says. "Just as there are many different hiking routes, there are also many different ways of electrolysis with different catalysts, which often cross at intermediate stages. As with hiking, some of them cost more energy, some less. Putting them all on one map," he explains his goal, "could ultimately speed up the search for the most efficient route.

The higher the efficiency, the more economical

This approach promises great potential. If the scientists succeed in minimizing the energy losses at the electrode, they could increase the efficiency of electrolysis and thus make it more economical. The researchers are relying on special catalysts in the electrode material - especially perovskite oxides. Their name comes from a common mineral consisting of calcium, titanium and oxygen. This class of materials is impressive because of its internal structure, as Marcel Risch explains: "All perovskites have the same characteristic atomic arrangement. This has the advantage that we can easily exchange chemical elements without changing the structure itself".

Risch, who is searching with his team for new catalysts for electrolysis, goes into detail: "In one sample, for example, we replace titanium with cobalt, in another with iron. One chemical element can also be replaced by several others, and even in different proportions and combinations. Every new material must prove itself in electrolysis. The researchers then compare the efficiency achieved in each case. For example, they have discovered that a perovskite structure made of barium, cobalt and iron is particularly suitable as an electrode material.

The role of perovskites for the energy turnaround

Where are they used?

Materials with perovskite structure are used in solar cells, capacitors or high-temperature superconductors. They are also being researched for use in medical implants or novel camera sensors and as catalysts for electrolysis.

What are their advantages?

One major advantage is that their components can be exchanged, but the structure remains the same. This allows new materials to be designed and their properties to be optimized. Another of the scientists' plans is that if frequently occurring and inexpensive elements are used, expensive or rare metals could be dispensed with.

But when will the best catalysts for efficient electrolysis be found and implemented? One thing is certain: There are still a few hurdles to be overcome before they can actually make hydrogen production more efficient. One of these hurdles is up to the materials researchers themselves: "We need standardized test conditions under which we can study new catalyst materials," says Risch. "This is the only way to obtain truly comparable results. The researcher sees another challenge in the interface between research and application. "On the one hand, the materials are being intensively researched, on the other hand, the electrolyzers are being optimized. On the other hand, the step in between, from the material to the plant, still offers great potential. With regard to the hydrogen strategies of the Federal Government and the European Union, however, the materials researcher is certain: "The course has been set. The signs for a climate-friendly hydrogen economy are currently very good".

Publication in the Journal of Physics: Energy

The search for the best catalyst

How does the search for the optimal elements for electrolysis remain manageable despite the numerous combinations? This is where Marcel Risch's overview paper, which was recently published in the Journal of Physics: Energy, should help. In addition to the current state of research, he evaluates two key figures proposed for the quality of a catalyst. "One of them is the occupation of a certain electronic state," explains Risch. In a good catalyst, according to the previous opinion, the electron cloud around the atoms points in the direction of oxygen. "When we compared the work of many research groups, however, we could not detect any such trend," he adds. He sees one reason for this in the lack of standardization for the production and test conditions of the new materials. As a result, not only the experiments but also the measured values would vary. "Even if the materials are nominally the same, their manufacture can result in different impurities in their structure and composition. We call these defects. And what influence these have is not yet fully understood," says the materials researcher.

That's why he was surprised that a second proposed measure works so well. This is specific to the perovskite structure. It relates the sizes of the atoms to one another and considers their arrangement within the material. The more symmetrical it is, the more suitable the material is as a catalyst. This finding is particularly important because researchers who have a measure for the quality of a material as a catalyst do not have to look for the proverbial needle in a haystack. This would give them an instrument with which they could decide which changes are important for catalysis and which are negligible.