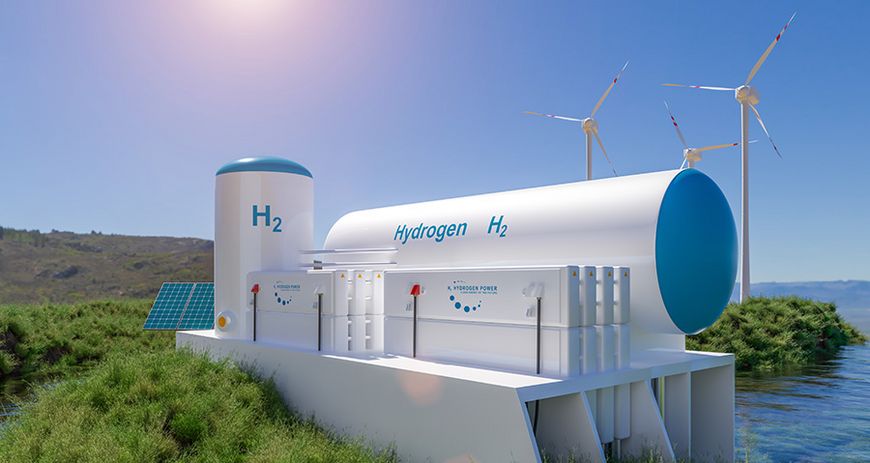 Hydrogen is to become a central pillar of a CO2-neutral future. There are still a few hurdles to be overcome on the way to this goal. Intensive research is to help.

"The Helmholtz Association researches the complete value chain of a future hydrogen system", says Jochen Linßen. "This starts with the development of materials and catalysts, goes on to electrolysis and fuel cell components and systems and ends with energy system and resource analysis." Linßen works at the Institute for Energy and Climate Research, Techno-economic Systems Analysis at Forschungszentrum Jülich. There he and his colleagues are looking at the energy system of the future and one of its mainstays: hydrogen. They have just published the results of their study "Cost-efficient and climate-friendly transformation strategies for the German energy system up to the year 2050". In it, they describe possible paths for the energy turnaround. "We looked at what the energy system of the future might look like," Linßen explains. "To do this, we had the computer calculate the cost-optimal ways to reduce CO2 emissions by 95 percent by 2050 compared to 1990 levels.

He went on to say that hydrogen would play a central role in this process. And the models suggest that it would be produced nationally and traded internationally. "If there should be a hydrogen market in the future", the scientist believes, "it will not be a purely German one, but a European and international one as well. Since hydrogen would have to be produced with renewable energies, he sees great potential not only in Germany but also in other windy countries such as Norway or Great Britain. But Iceland with its geothermal energy also joins this list. But while renewable hydrogen production can be modeled from weather and regional data, the demand side poses a challenge for the scientists. "This is currently one of our main activities", says Linßen, "because in order to be able to make reliable trends for a future hydrogen market, we have to estimate the demand as accurately as possible, both in terms of time and space".

Hydrogen is not only electricity

Thomas Jordan is researching how hydrogen could replace gasoline and gas in the future. He heads the hydrogen group of the Institute for Thermal Energy Technology and Safety (ITES) at the Karlsruhe Institute of Technology (KIT). He coordinates several EU projects related to hydrogen. Together with international partners, Jordan is focusing on the fuel sector and the corresponding safety aspects. Because there is already a lot of hydrogen in gasoline and diesel. It "saturates" the organic compounds, making them more stable, but above all it serves to desulfurize the crude oil. "Fuel production is currently the largest consumer of hydrogen in Germany," the researcher reports. "And this hydrogen is currently produced mainly from natural gas."

Fuels that use green electricity for their production and thus completely dispense with oil and natural gas are called e-Fuels. They are chemically assembled directly from hydrogen and carbon dioxide in large-scale plants. If this is done with energy from regenerative sources, renewably produced electricity and CO2 from the atmosphere, they are CO2-neutral. "With design fuels, the current infrastructure could continue to be used," explains the researcher, "because they are liquid and could use pipes and filling stations that currently carry gasoline or diesel. "For cars with a fairly short service life, this is not particularly relevant, though. However, the situation would be completely different for mobility systems used over the longer term, such as rail vehicles or airplanes. After all, their usage and investment strategy is very different from the passenger car market.

But Jordan and his colleagues are not just looking at the mobility sector. They also want to know, for example, how hydrogen can be produced CO2-free in ways other than electrolysis, and how it can be used to make various chemical industry products or steel "green" in a cost-effective way. In traditional steel production, coal is used to break down iron ore. The carbon separates the oxygen from the iron oxide. This is called reduction. What remains is pure iron and a lot of carbon dioxide. "The steel industry is a very large emitter of CO2," explains the scientist. "But reduction can also be achieved with hydrogen. All that would then remain is water vapor. And that could even be used to generate energy.

The potential of hydrogen in industrial processes is also confirmed by Ralf Peters: "In industry, CO2 is not only released by energy generation. Often it is also caused by processes and arises during the production of a wide variety of substances," says the scientist, who heads the Fuel Synthesis and Systems Engineering Department at Forschungszentrum Jülich. "Some of it can be directly replaced by hydrogen - as in steel production, for example. But there is a certain amount of carbon that cannot be replaced and that is where CCUS comes in.

The abbreviation stands for Carbon Capture Utilization and Storage. Carbon dioxide produced in the process is separated, captured and either stored or reused as a raw material. He is investigating the hidden potential of this process in the European project Align CCUS. "Carbon dioxide is a dead gas. It does not react on its own. But with hydrogen and the right know-how it can be used to produce raw materials for industry," says Peters. In the project, he and his colleagues are working on the efficiency of this "climate gas recycling". "Germany is particularly well positioned in the area of using the captured CO2," says the scientist. "This has to do with our high CO2 reduction targets of 80 and 95 percent respectively. These, he explains, would require a very broad use of hydrogen. And that will only be possible if the electricity, heating, mobility and industrial sectors are coupled together. The key word here is Power to X. Surplus renewable energy is not only stored here, but also transformed into fuels and basic materials for industry. "This was a very German topic at the beginning," says Peters. "But in the meantime, interest in it is high throughout Europe. And I think this is also the key to successful decarbonization."